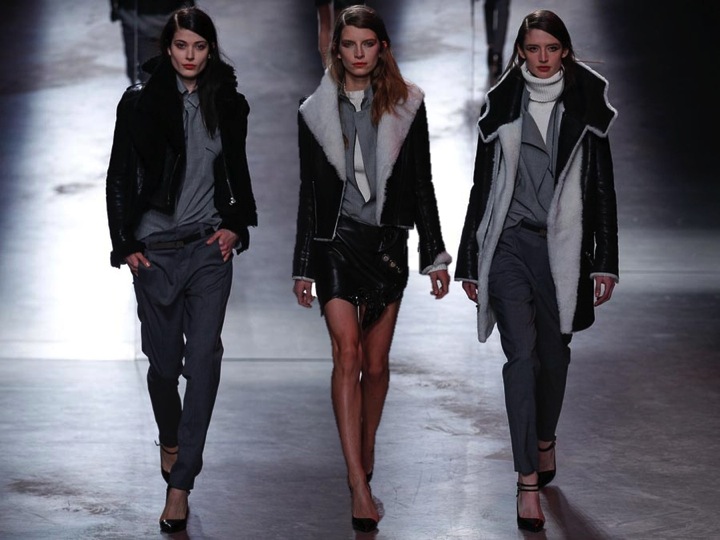 Anthony Vaccarello showed one of the best collection of his account- that was literally, very him. The collection was full of sex appeal- leather mini dresses; feminine ruffles; sharp cuts giving some leg and many other aspects making the collection one of the brave ones. There were also some incredible black shirling jackets and rays of strong, red colour! But who really stole the spotlight was Anja Rubik, who wore a sheer blouse and a black cape! That moment got me shake. This is certainly a Parisienne dose of the night. 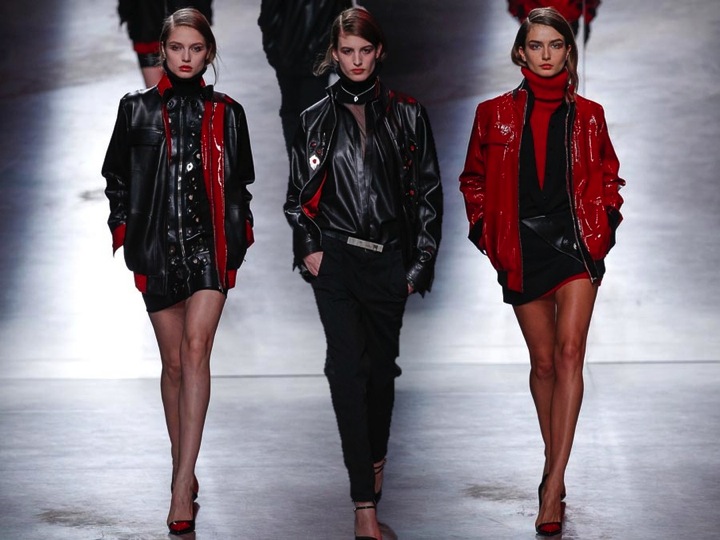 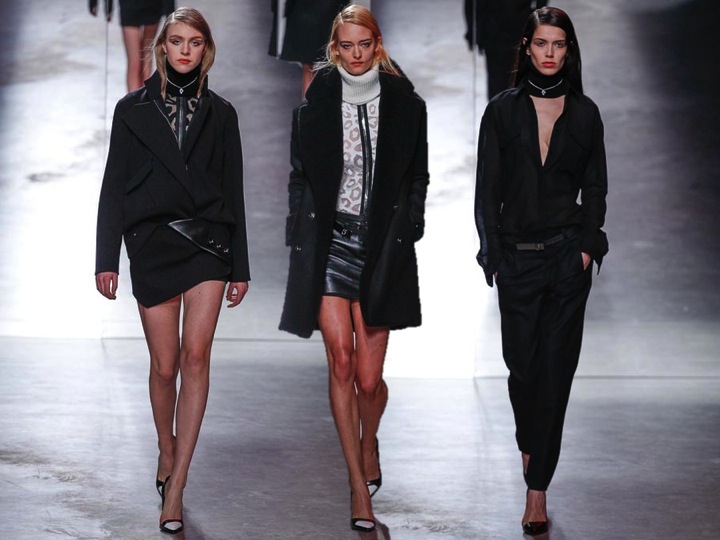 When Anja Rubik opens a show in a sexy black jacket at Anthony Vaccarello, then… Well, there is no possibility it will be a dissapoinment! With a huge dose of sex appeal, the SS14 collection from this emerging designer is something unbelievably simple, but at the same time cool. Vaccarello is famous for his amazing sexy cuts, bandage dresses and great use of leather… Do you remember the Met Gala red leather dress that Anja wore? The motif of it was already Summer 2014 that has too a similar look. I also loved the dyed jeans- something new at Anthony, while for few seasons we see only mini skirt or evening gowns… For the first Paris Fashion Week collection this season, it feels already… Parisian. And that’s why this my favourite fashion week of all! 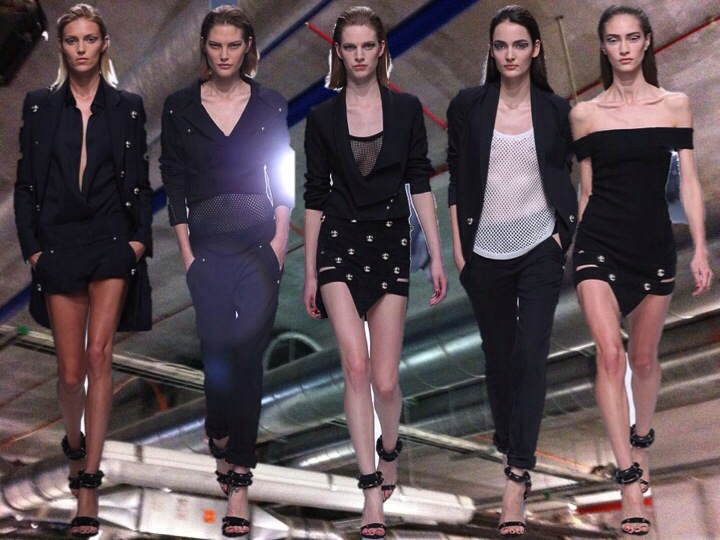 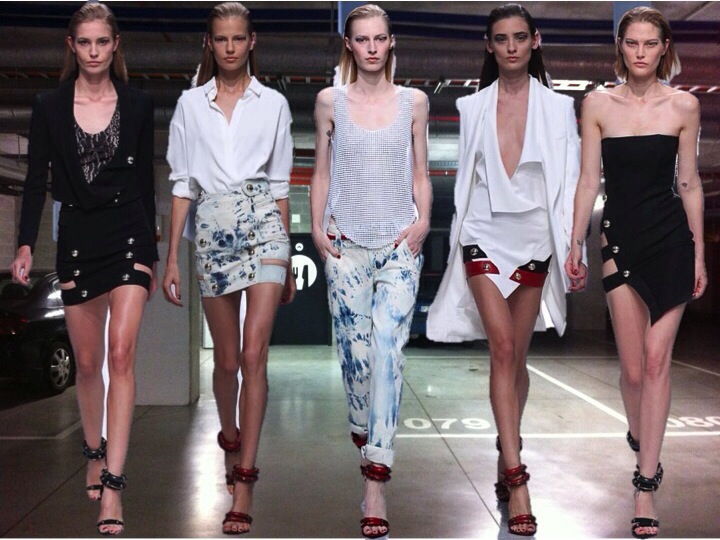 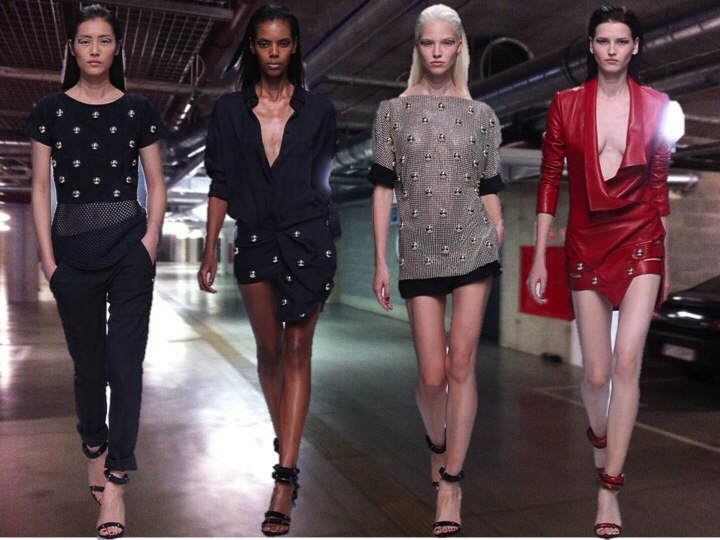 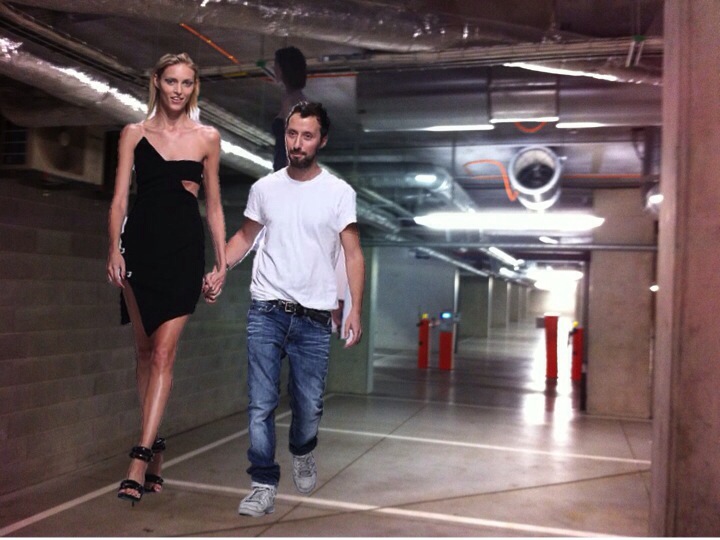 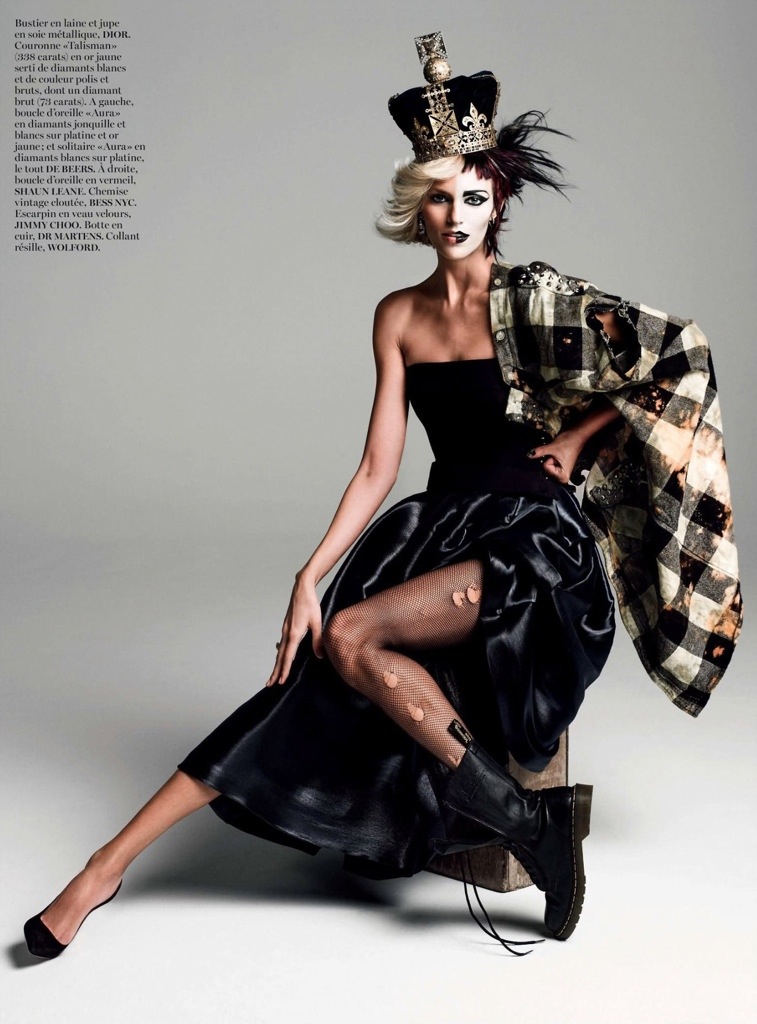 Thanks God somebody told dear Emanuelle Alt that she kills the spirit of Vogue Paris. Why? The new issue is just a fantasy! All issues before had to be also so cool! This month we will find in Vogue Paris a fabulous editorial starring Anja Rubik that is all about Couture to Chaos (or maybe other side!) and in other words: PUNK. This season punk is the trend number one with leading labels like Saint Laurent and Chanel. Here, in this great shoot, Anja works out as two models in one… In one half she is a good girl wearing a Alexander McQueen gown, and other part, wearing same dress, but giving as a f*** you sign and smoking a cigarette with a strong mascara on face! But it’s still her! The editorial is at the same glamorous and crazy! Love it!!! 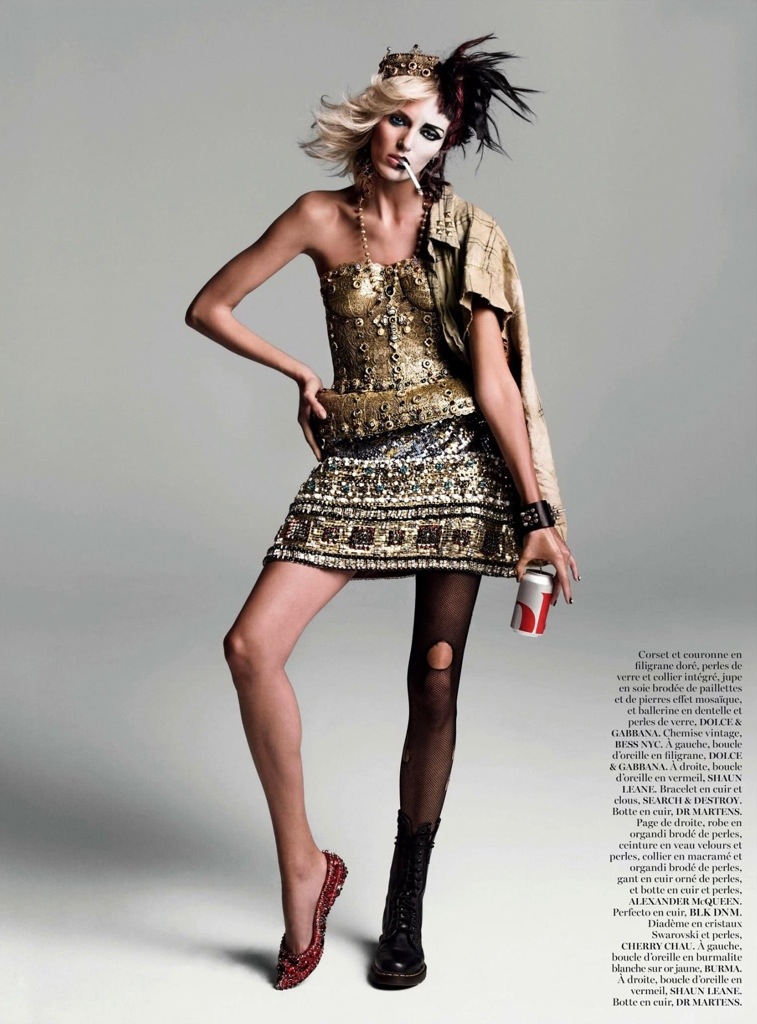 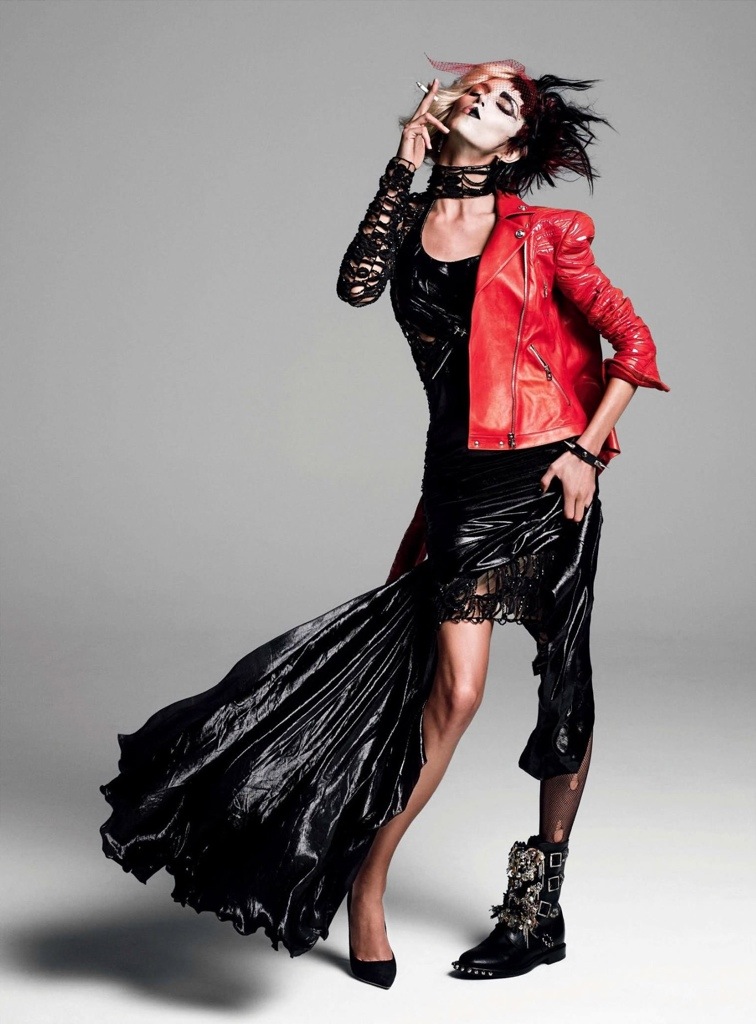 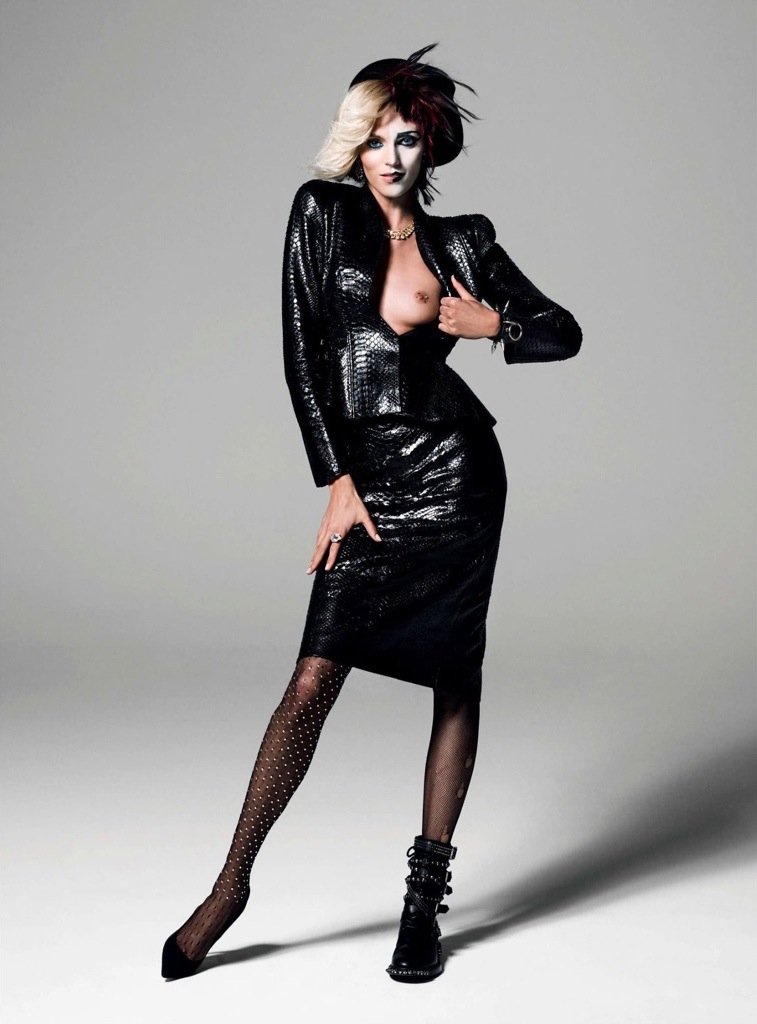 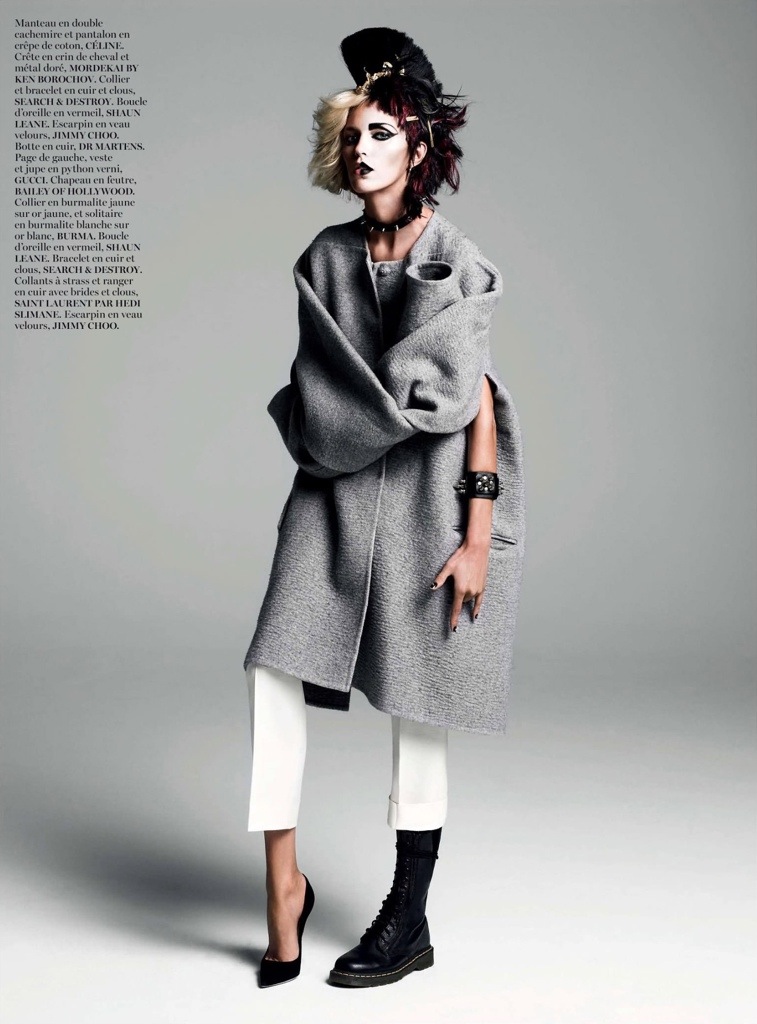 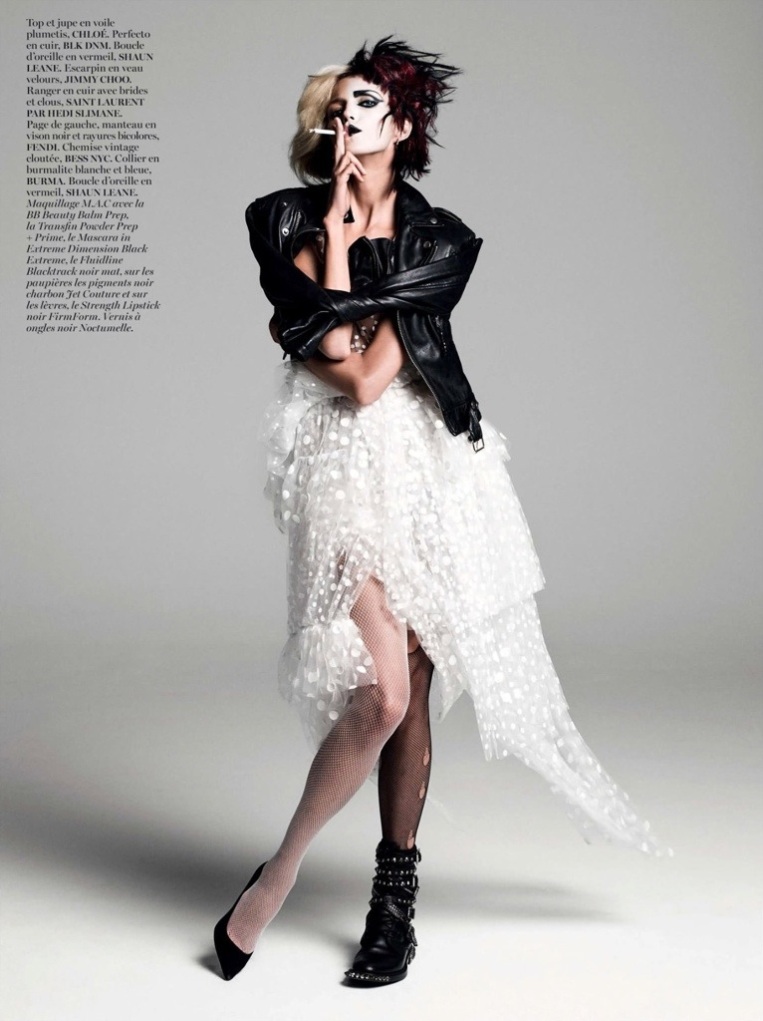 The Yves Saint Laurent Le Smoking look is schanging every season, but always stays black, simple and classical. Even if it is now Saint Laurent by Hedi Slimane! The campaigns of this famous Parisian style looks maybe slightly different (models for example) but usually it’s all about one beautiful women in the Le Smoking and other one totally naked! Just like in 1975, when Le Smoking began to be a bestseller of the master, Yves. After his death, Stefano Pilati came and strangely looking from persepective of now, FORGOT how the Le Smoking should look like! There were some black jackets but there was no this parisian chic thing. Now, when it’s Hedi, after few months later when his AW13 show was presented, I think Hedi Slimane keeps the tradition much better than Stefano! Just check Net A Porter- you look, and mostly we can see the elegant jackets and trousers to the Le Smoking costumes! It’s chick, luxurious and elegant but Ready to Wear! And now this amazing campaign with Cara Delevigne (advertising YSL Baby Doll) with this naked women… This is like a new Helmut Newton work (he took this fabulous pic in 1975 on Rue Aubriot in Paris).

And today (but before Cara) Anja Rubik looks amazing in Le Smoking Slimane photography for his campaign. Here are pics of past Le Smoking campaigns and runway pics from Yves era! Chic, Chic! 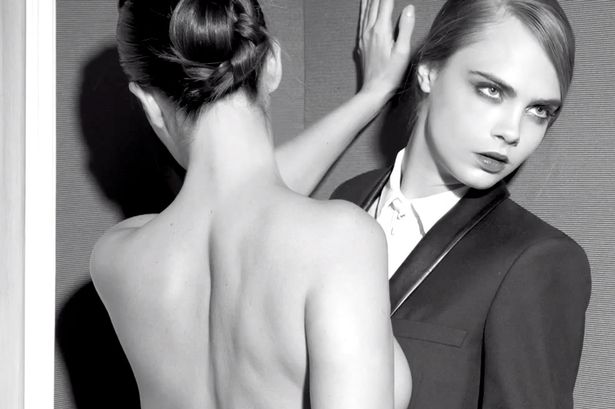 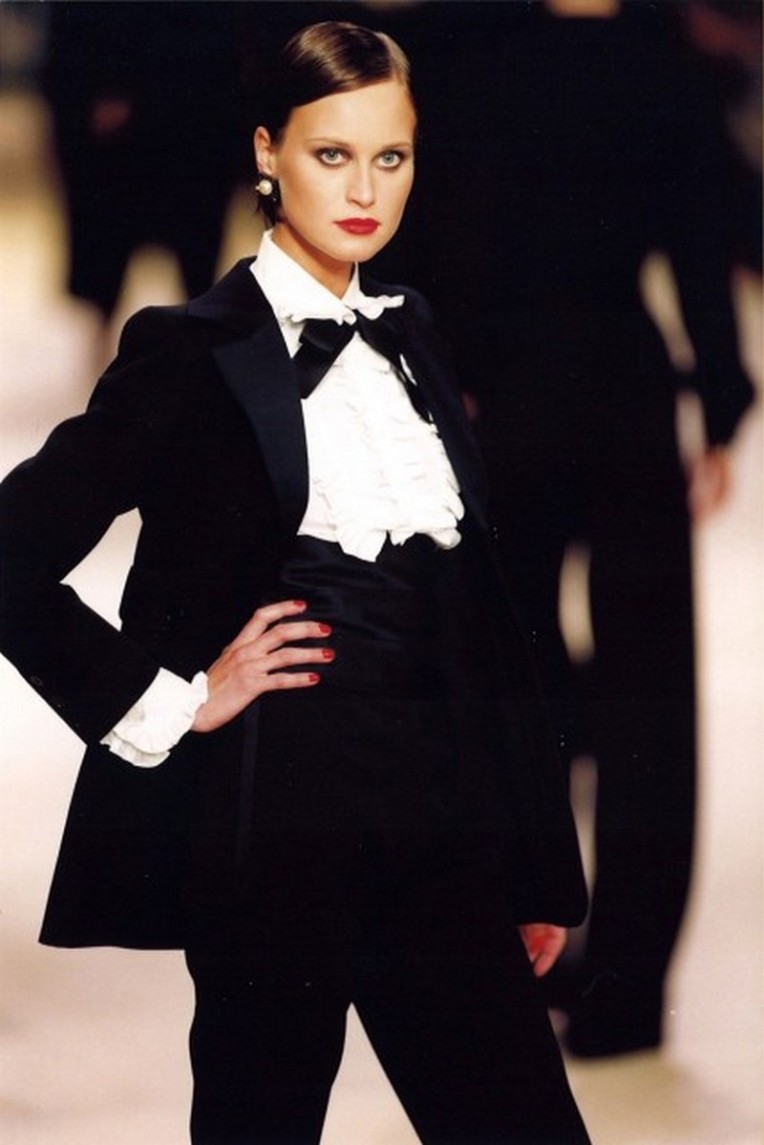 And now just one thing… did you see the Louis Vuitton film for Love Magazine presenting top models (Cara, Magdalena Frackowiak…) walking naked in furs around Paris at night? And sitting in a car and doing sexy poses?  This film by James Lima did a lot controversy in the media worl, for example that LV accuses prostitution in their campaign! Well… in 1975 Helmut Newton did a controversy with his Smoking campaign and nobody set it’s prostitution. By the way, in 1975 (again) there was this TOTALLY naked (in film Cara wears fur) and there was no real commotion about it. And that was kind of good then? It is good, as well as the film. So for what do the politicians do this commotion? in reality, there is a really short moment when one model show some parts. I think this film is more about fashion and sensuality than about prostitutions. For sure for controversy that Marc Jacobs likes to do…But should we care? I like it, just as the amazing Le Smoking! 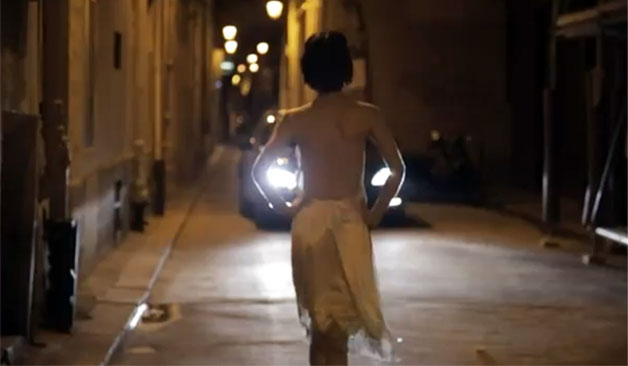 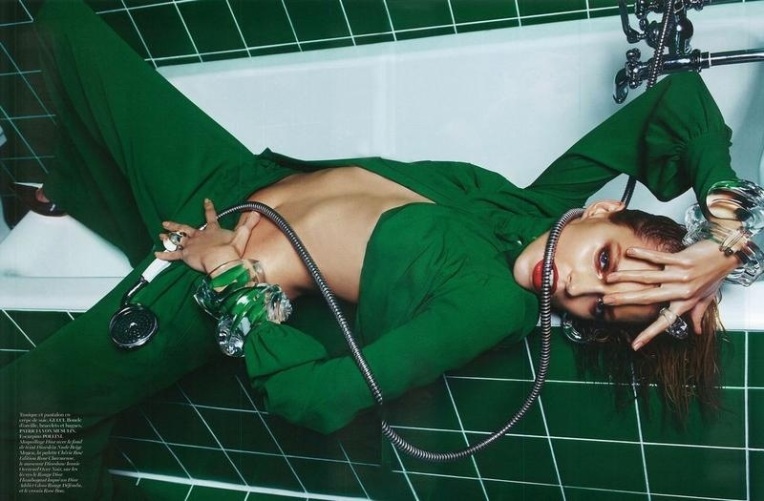 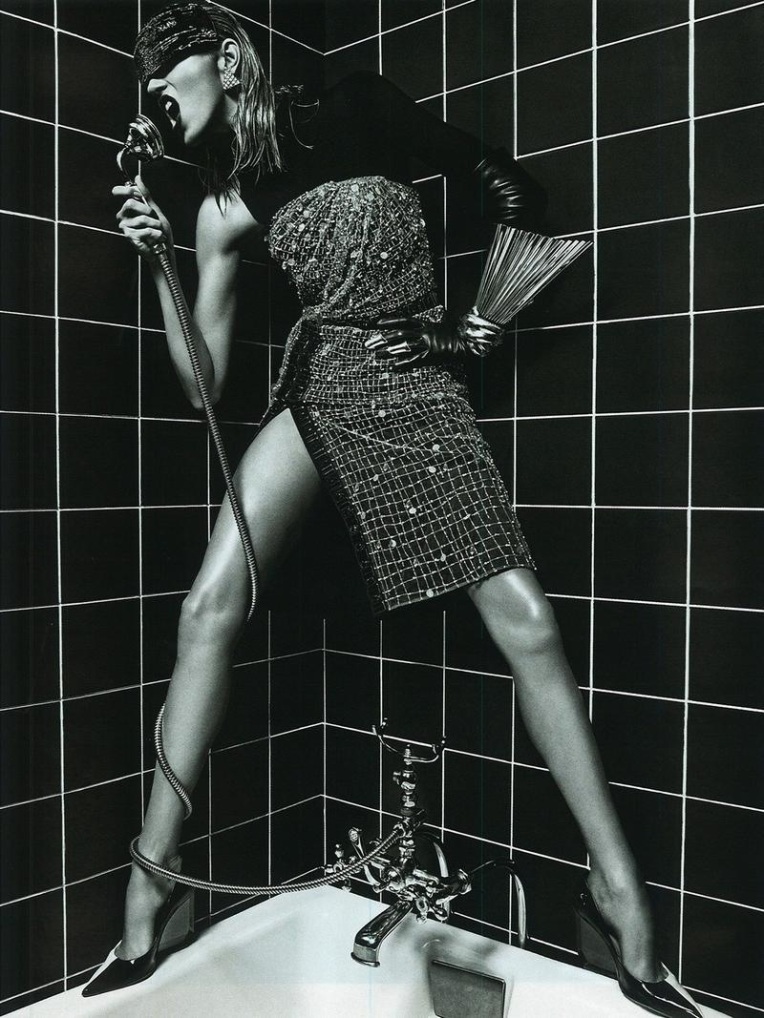