Chanel venue productions are always over-the-top fancy, and always too unreal. But for autumn-winter 2016, Karl Lagerfeld decided to make his haute couture show an actual haute couture atelier. The legendary petites mains from Rue Cambon were transported to Grand Palais with all their sewing machines, becoming a living and breating setting for the models.

“Behind the girls in the show, there are 200 more who make what they wear—that’s quite a lot, no?—and I thought we should show them to the public too.” For this season’s couture, Chanel praised the women who are behind all the coveted tweed pantsuits, duchesse satin dresses and floriform embroidery. However, it seems like the heart of the house was exposed to the crowd; the intimacy of couture-making was disturbed for good, being suddenly photographed and tagged for social media. And surely, producing such venue is a desperate move to steal the spotlight.

But let’s not forget about the clothes, or rather wearable pieces of art. Although first looks were very classical and very Coco, the gowns which were emerging from the “atelier” oozed with drama. Black, tulle gown worn by Molly Bair with an exaggerated collar looked spectacular, while Edie Campbell’s closing look, so an embellished, pink coat with feathers on the back, was ethereal.  The concept is ambiguous; the dresses are great. Quite average, as for Chanel. 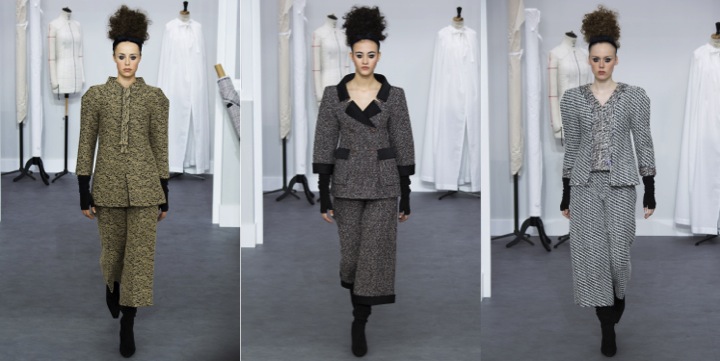 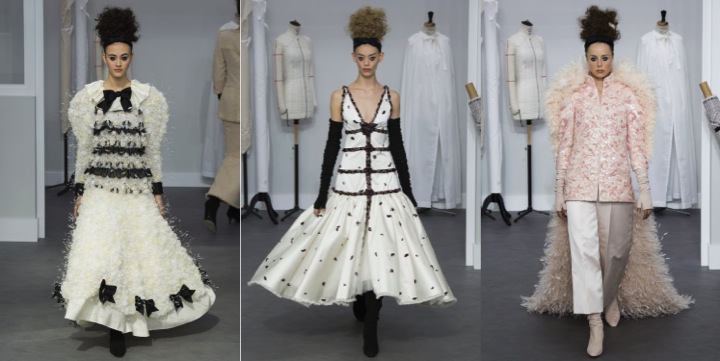 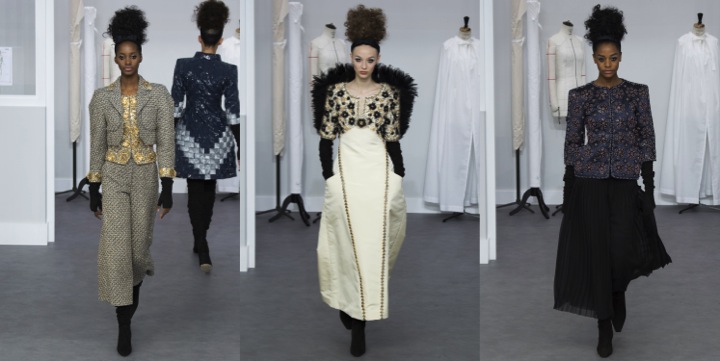 Bertrand Guyon has his second season at Schiaparelli finished, but it still seems that he needs time to show his audience who he is. The signatures of Elsa Schiaparelli are so characteristic that it’s surely hard to make your personal style the first privilege – even though Marco Zanini, the predecessor of Guyon at the brand, was nearly there. The idea behind the haute couture spring-summer 2016 collection, or rather a thematic find from Elsa’s archives, was celebration of food and the family meal. The topic of food was significant for the legendary designer – in her autobiography “Shocking Life“, she stated “eating well gives a spectacular joy to life and contributes immensely to goodwill and happy companionship. It is of great importance to the morale.” Indeed, the nearly minuscule details and bejewelled embroideries, created in collaboration with Maripol, looked joyous. The adorable cherry was hooked over one nipple, while an evolution of a “breakfast egg” had been humoristically presented in form of jacket buttons. Bertrand and his team proved that craftsmanship is the maison‘s specialty – the blazer above was ornamented with a wheat plaiting technique, known to the best Parisian ateliers only.

However, the collection had its bad site which couldn’t be fixed by all those nutritious finishings – in the overall, the collection looked unfinished. The closing looks weren’t spectacular at all – modest, scanty dresses felt not on the right place. Even the spider-web shoulder exposures were illogical. I suppose Elsa didn’t mean insects as her favourite positions in the menu. As it’s visible, the collection needed a more strict edit, and a rich, festive ending. I still felt hungry after the show. 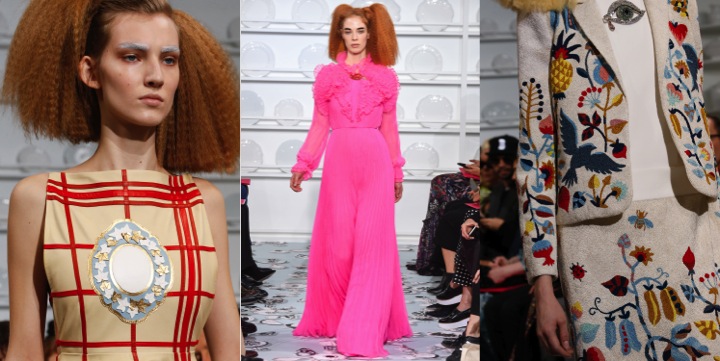 Naomi Campbell walked down the runway like only Naomi can, in a jacket held together with crystal hooks and eyes. Underneath she wore a black lace bra, inspired with Madonna, and she was flashing a substantial swath of upper thigh. That was amazing. The icon in pretty new, fresh form, was mind blowing. The collection of Atelier Versace by Donatella Versace was all about bright past. First of all you need to know, that Donatella is recreating only two years, after a long break when Gianni died. This is like a renaissance. I should say, that for real Atelier Versace is now and then two much better than all these Chanel and Dior Haute Couture… All the Sergeenko’s, Valli’s, Jarrar’s need to hide and will never be as good as Atelier. Gianni is dead, but Donatella lives, and she really makes the label up. This is fantastic. I love it. Really.
This collection wasn’t about shitty minimalism but is propagated by Dior, or cheap looking wedding dresses by Chanel. The details- crystal hooks, fur, amazing tailor ship, best quality. And a cat suit that plunged down to Lindsey Wixson’s navel was paneled from lace, net, and handwoven leather. That piece was the least thirties-ish of the lot, but all of the models wore real diamond jewelry designed by Versace. I feel the Gianni spirit here!!! 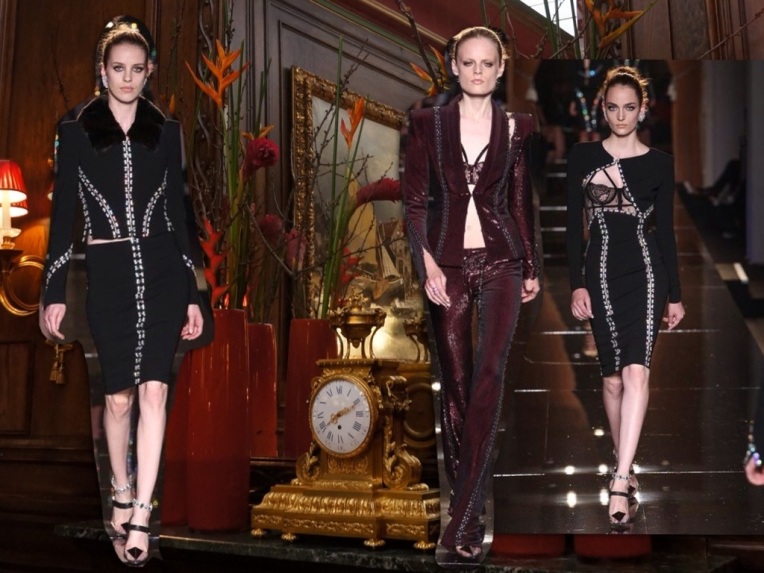 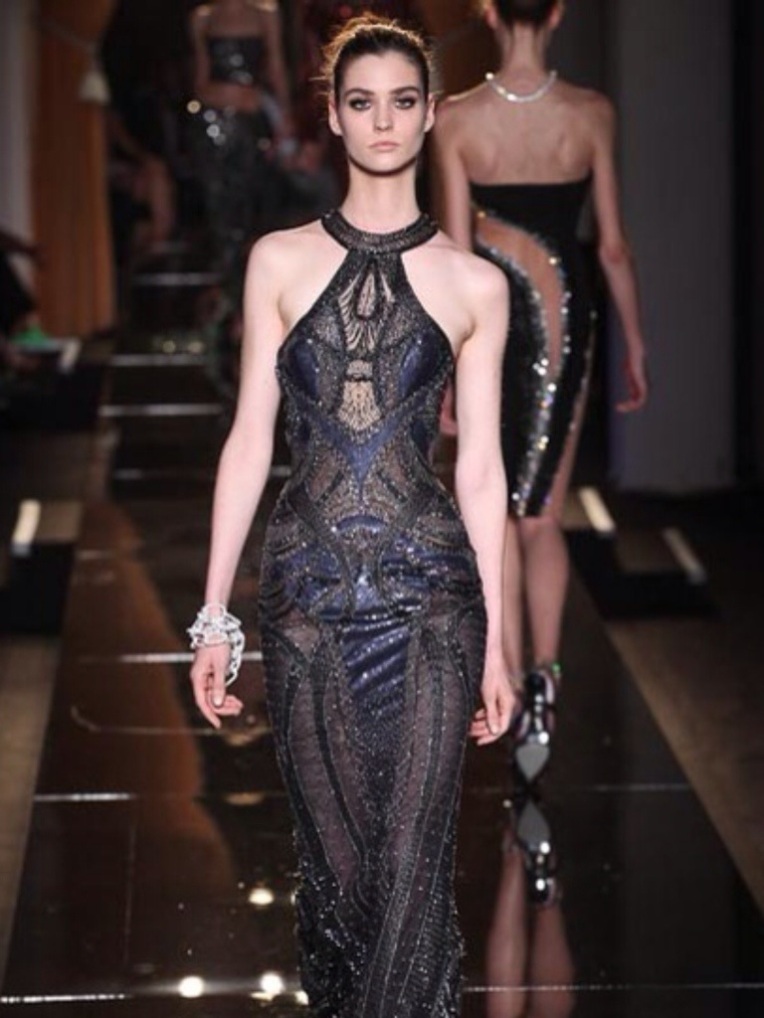 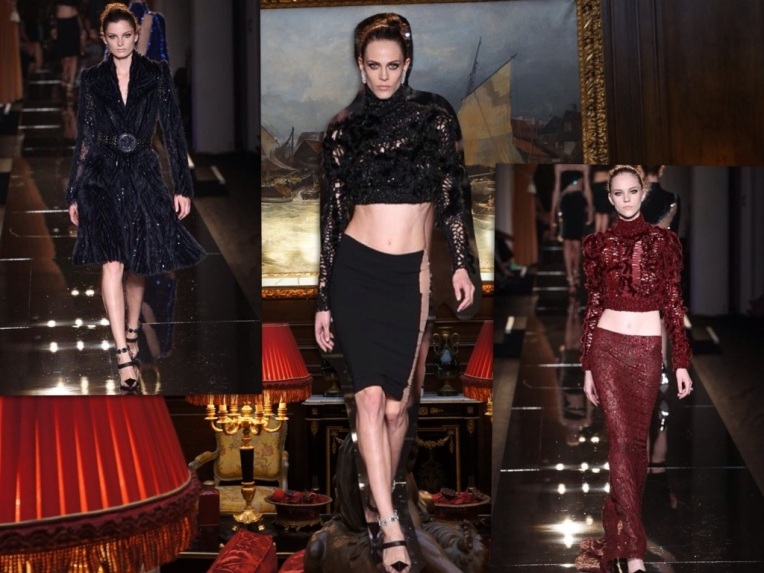 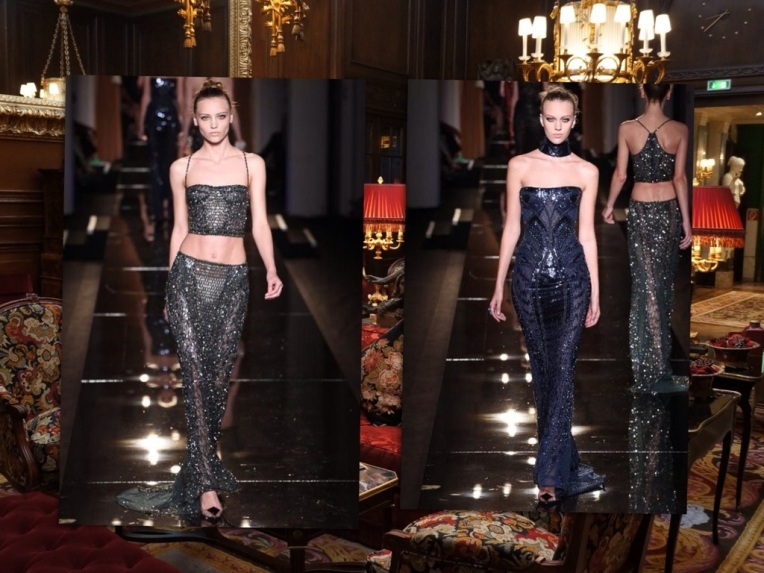 Viva Vox is a modern, sophisticated label from Moscow, that I would say is… different. It’s not Ulyana Sergeenko boons couture nor Alexander Terkhov “I am a Parisian designer, but I am based in Moscow” style. This looks like a label (since 1997) that is not being advertised by all these Ksenias, Dashas, Mashas and others. Looking at these Viva Vox designs, you would love to see them even in New York! “VIVA VOX is all about the power of contradictions and surprises: the result is sensual as it is intellectual. Avant-garde, often provocative, never obvious, VIVA VOX is characterized by a very strong identity.” You see, what a good “philosophy” can be find on their side? 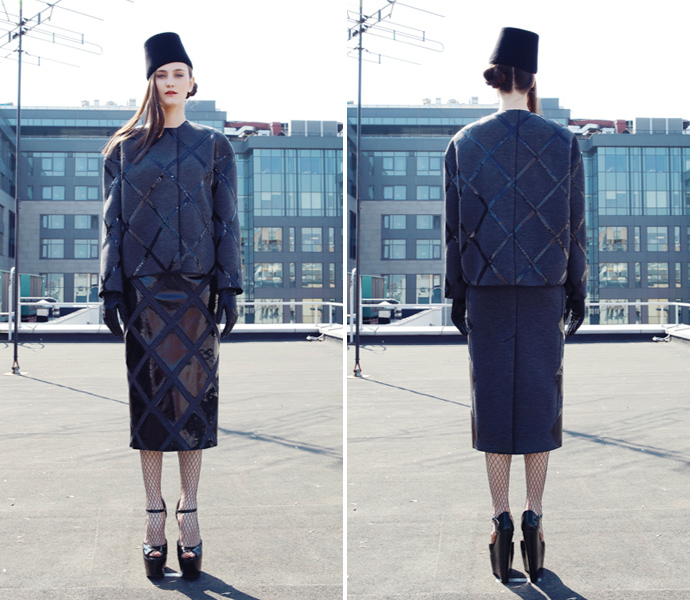 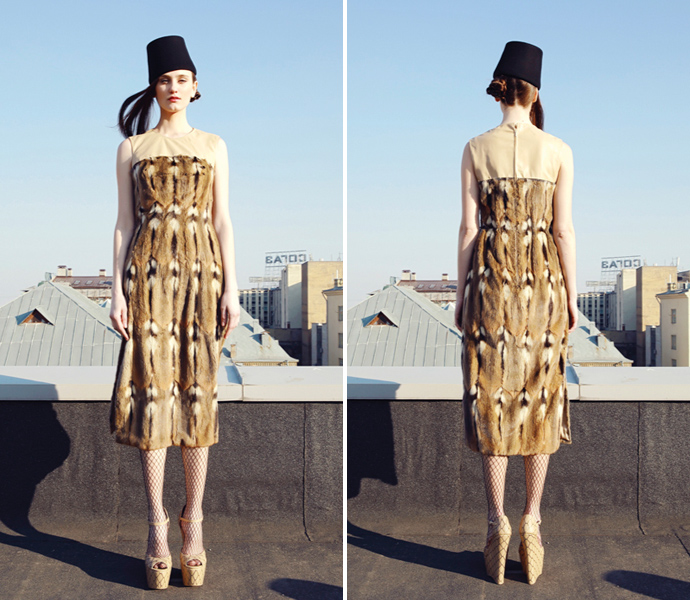 Looks chic! The artistic director, Oleg Ovsiev that studied Ecole de Couture van Rijn (Netherlands), is known for amazing mixing of furand leather with different fabrics. He came here in 2005, and made the brand on top in Moscow with it’s pret a porter touch! My favourites are for sure all the fur dresses (above!), fur tops and fur skirts. The kaleidoscopic prints are as well stunning! If you are interested there is an Atelier on Tverskaya street in Moscow… Keeping my hope on this label! 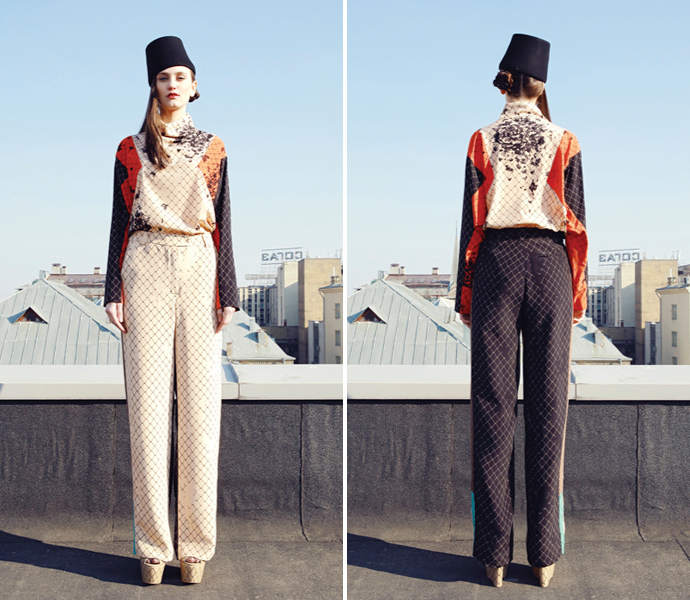 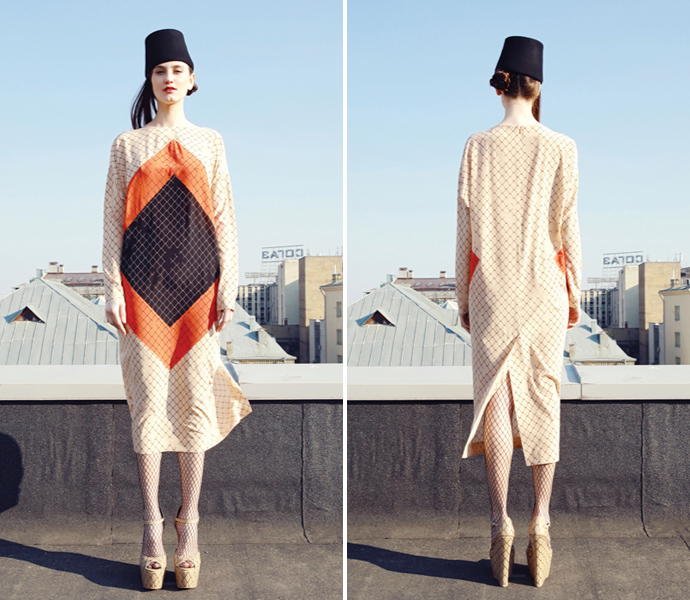