Virginie Viard‘s Chanel seems not to care about being “cool” or “relevant” – maybe that’s why her vision is often underrated and simply mistunderstood. Her Chanel is eternally… Chanel. And I think that’s why I learned to love it. This collection highlights the creative dialogue between Virginie Viard and the Maisons d’art, enhancing the creations of the house. This year, the Métiers d’art collection was held at the Château de Chenonceau, located in the Loire Valley and also known as Le Château des Dames. The show was nearly guest-less due to COVID-19 – there was only Kristen Stewart, the brand’s ambassador, in the audience (this had to be fun!). Le Château des Dames’s history is closely linked with the legendary women who alternately lived there: Katherine Briçonnet, Diane de Poitiers, Catherine de’ Medici, Louise de Lorraine, Gabrielle d’Estrées and Louise Dupin. In the second half of the 16th century, the queen of Italian origins, Catherine de’ Medici gave this residence the splendour of the Renaissance. As proof, numerous inscriptions of her monogram remain visible in the castle’s décor: two interlaced Cs that bear an astounding resemblance to the double C that Gabrielle Chanel presented as early as 1921 on the stopper of the N°5 perfume. Beyond the emblematic CC, echoes of the castle’s rich history meet the world of Chanel in the black-and-white hues of the tiling in the “Royal Gallery“, the appearance of the lion, Gabrielle Chanel’s beloved symbol, embroidered tapestries and in the ordered lines of the castle’s gardens. What about the collection? It’s pure elegance and craftsmanship, all created with the skills of Métiers d’art artisans: paruriers from Desrues, feathermakers from Lemarié, milliners from Maison Michel, embroiderers from Lesage and Atelier Montex, shoemakers from Massaro, goldsmiths from Goossens, glovemakers from Causse Gantier and pleaters from Lognon, in Paris and in France. The collection was a balance of princess style and something a bit darker. The chess board sequin miniskirts (and matching purses) worn over shiny lycra (or bejeweled stretch velvet) leggings, an amazing woven tweed ball skirt paired with a black sweater with Renaissance white flower motifs growing up the arms, capes, poet blouses, ruffled gauntlet gloves, and massaro’s D’Artagnan boots for a bit of 16th-century dress-up swagger. There’s a lot to love about this collection, especially seen through the lenses of Juergen Teller. Viard, as she explained, took inspiration from Lagerfeld’s fall 1983 trompe l’oeil “shower” collection for Chloé that featured embroidered faucets and showerheads spouting crystal water sprays. Her own playful trompe l’oeil, developed with the inventive embroidery house of Montex, reimagines the castle in Lego-like sequin bricks, used as cummerbund sashes that cinch the waists of full satin ball skirts worn with fragile organza blouses flourished with some of those Catherine de Medici–via–Coco Chanel ruffled collars. The chateau’s tapestries inspired intarsia knits and Lesage embroidered evening sweaters. Lemarie, meanwhile, famed for their feather and artificial flower work, are responsible for the trellis of black ribbons laid over translucent organza that evoke Chenonceau-era court dress with a light 2020 touch. That dialogue across the centuries is also expressed in the playful drama of a floor-length black velvet coat that opens to reveal a pale tweed body, gilt buttoned like a traditional Chanel jacket. Delightful. 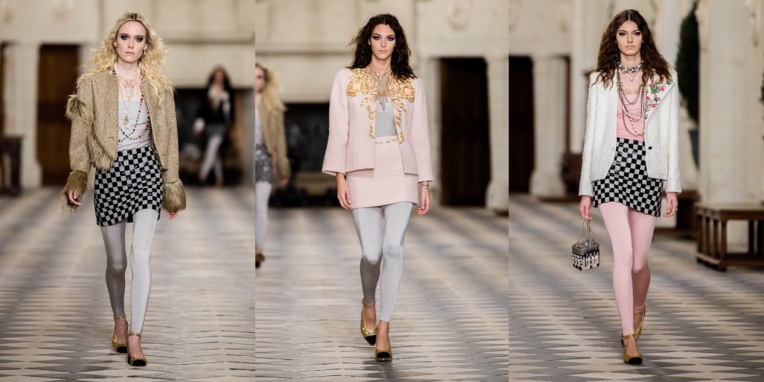 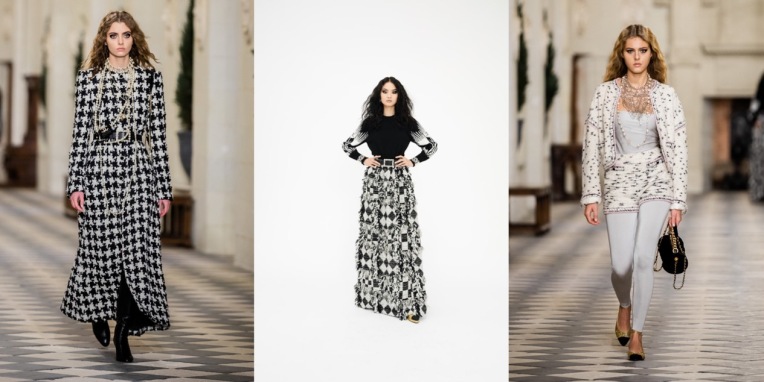 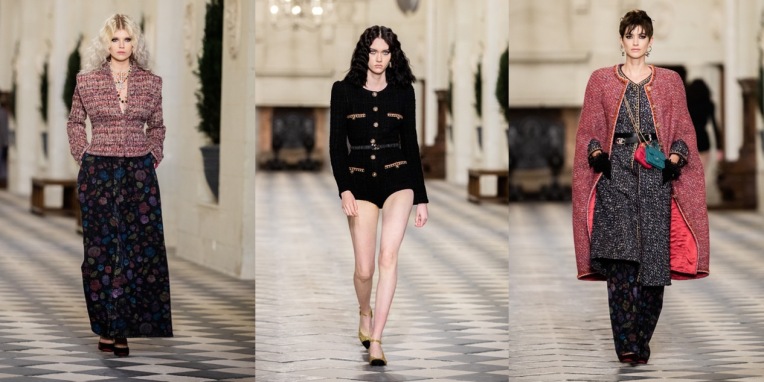 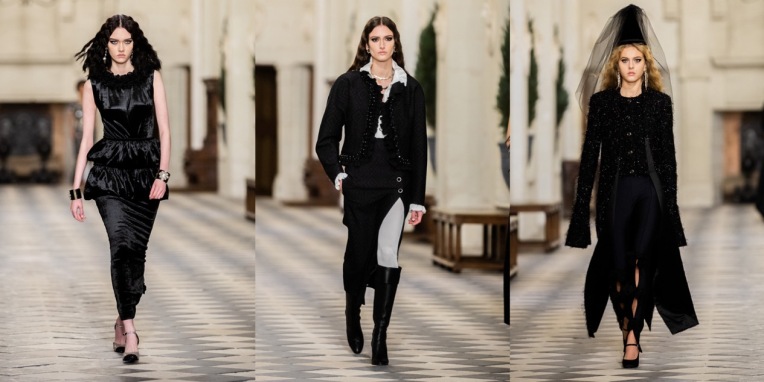 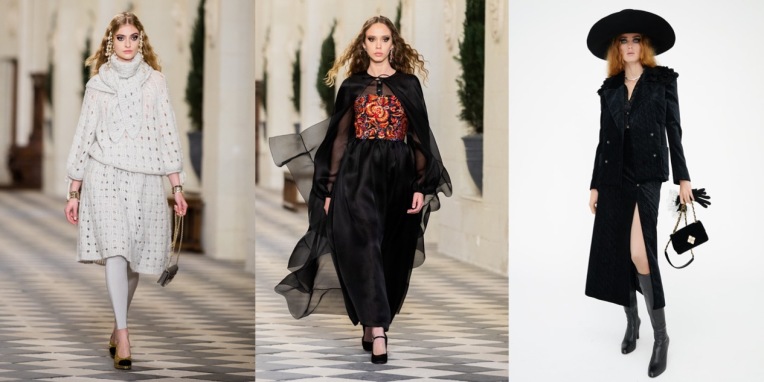