For the autumn-winter 2020 season, Lucie and Luke Meier presented their men’s Jil Sander collection at Pitti Uomo in Florence. In the complex of the Santa Maria Novella, where the show was staged (accompanied by three huge heaps of marigolds), stands an ancient pharmacy dating back to the 13th century in which balms and salves have been concocted from calendula for generations. This created a connection to the fine silk tassels – confession box Catholic, but here mostly in monochrome – that sparked thoughts of local historical attire, as did a carefully roughened white habit that passed in the collection. Still, the Meiers don’t need references to stand behind their clothes. Lucie spoke of wanting to make garments with lifetime appeal (“cherishable clothes”). The Shetland knitwear, the fantasic, over-sized tailoring, the ornamental, yet subtle beaded details on the coats – those are clothes that will stay with you forever and never get out of fashion. 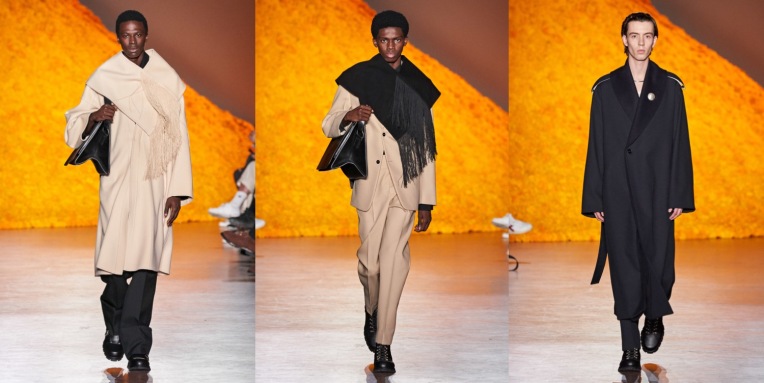 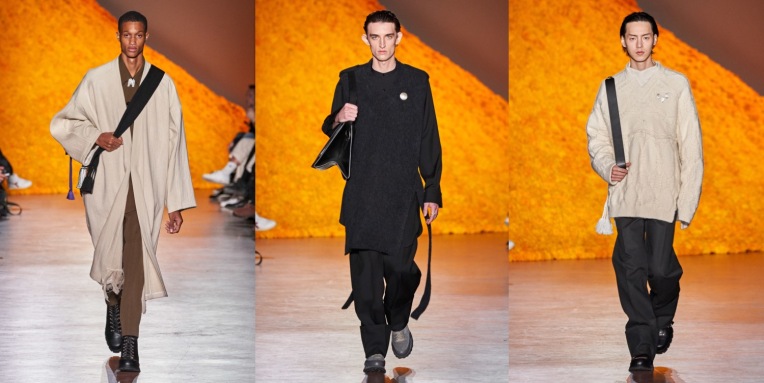 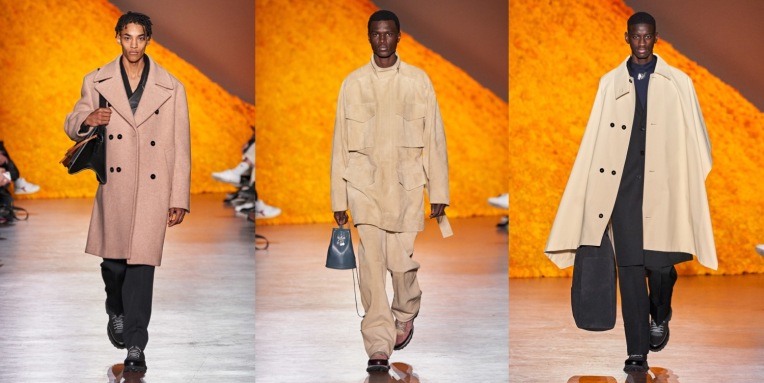 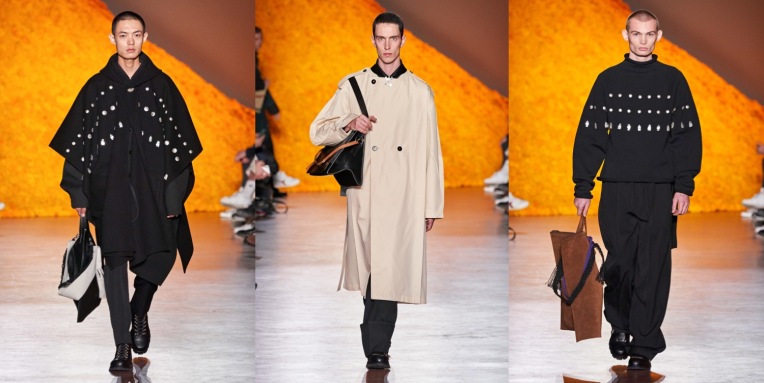 I’m still in absolute awe. Salvatore Ferragamo‘s spring-summer 2020 collection for men (and resort 2020 for women) was the best thing I’ve seen for a while in fashion. It was that good. No fashion show has ever been allowed in Florence’s Piazza della Signoria before. The view had to be really, really impressive, noting that the models walked in front of David. Plus, comparing to other shows we’ve seen this month, this one had a real sense behind the location: Florence is the company’s home. Now, fashion. Paul Andrew and Guillaume Meilland have already proved that they’re a good match for Ferragamo in their previous. But this one was their best. I fell in complete love with all the jumpsuits the designers sent down the runway – especially the one in deep purple, with a zipper and a belt at the waist. The perfect balance between utilitarian and Italian elegance. Something you would love to wear to your vineyard in Tuscany. I adored all the leather pants and shorts, too. The colour palette, mainly mint, lavender and ochre, was a dream. There’s beautiful tailoring as well as pajama pants. While using the so-called “rave” sunglasses sounds like trying too hard to impress the younger audience, here they looked properly cool. Just wow. 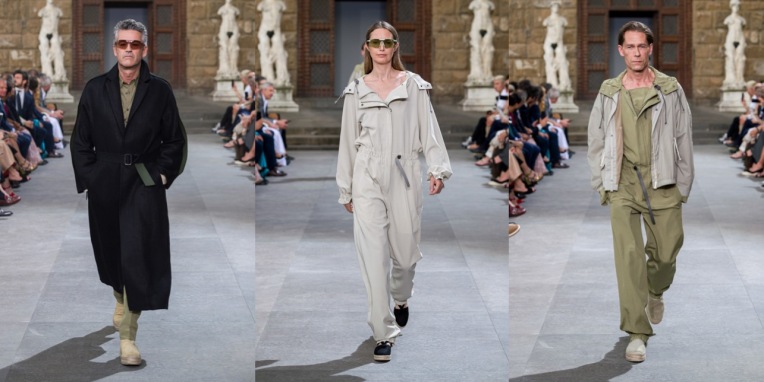 If you’re travelling by car and got a place to stay at in Florence, you really should go and discover Tuscany. To feel the Tuscan rhythm of life, try Montepulciano. This medieval village rests atop a narrow hill and can be found in an unbelievably postcard-perfect landscape, filled with cypress trees and sun-drenched vineyards…The best way to discover the elegant historic center is on foot: as you walk along, you’ll come across Renaissance palazzos before reaching – at the highest point of Montepulciano – the main piazza. But despite its beauty, Montepulciano is also world-famous for its Vino Nobile, considered one of the best Tuscan wines in the world, made with grapes coming from vineyards surrounding the village. Also, it’s worth visiting the local food stores (I mean, their salami and cheese… well. I can’t believe I ate all the supplies I brought home!) and the oldest library in town – Magnanet Libreria Di Lorenzo Rago. The owner is the third generation of the family that opened it and there are more than 15,000 books (!) in their archives. It’s impossible not to fall in love with this place… 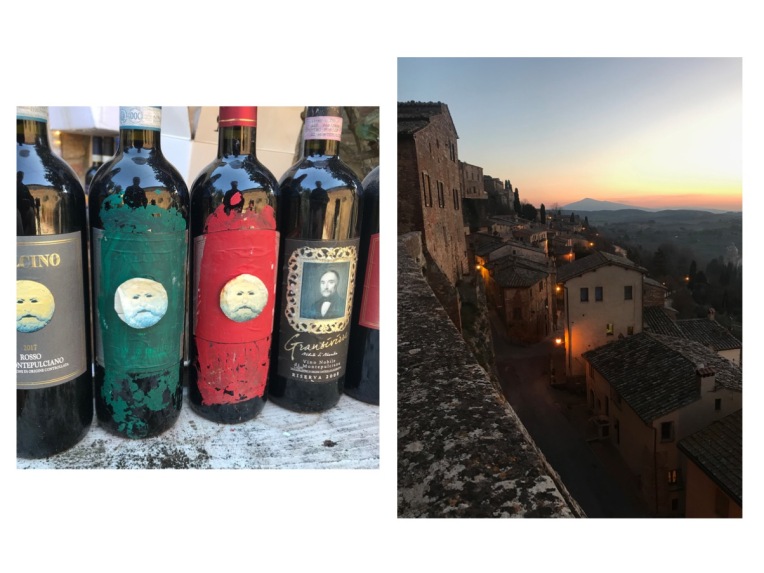 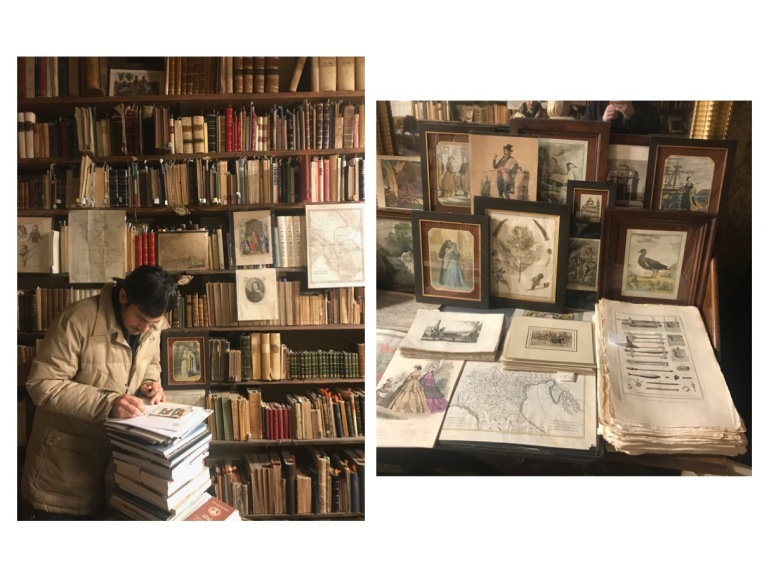 Other than Trattoria Sostanza and Gucci Garden, which I wrote about in separate posts, here are five more addresses I found interesting in Florence. 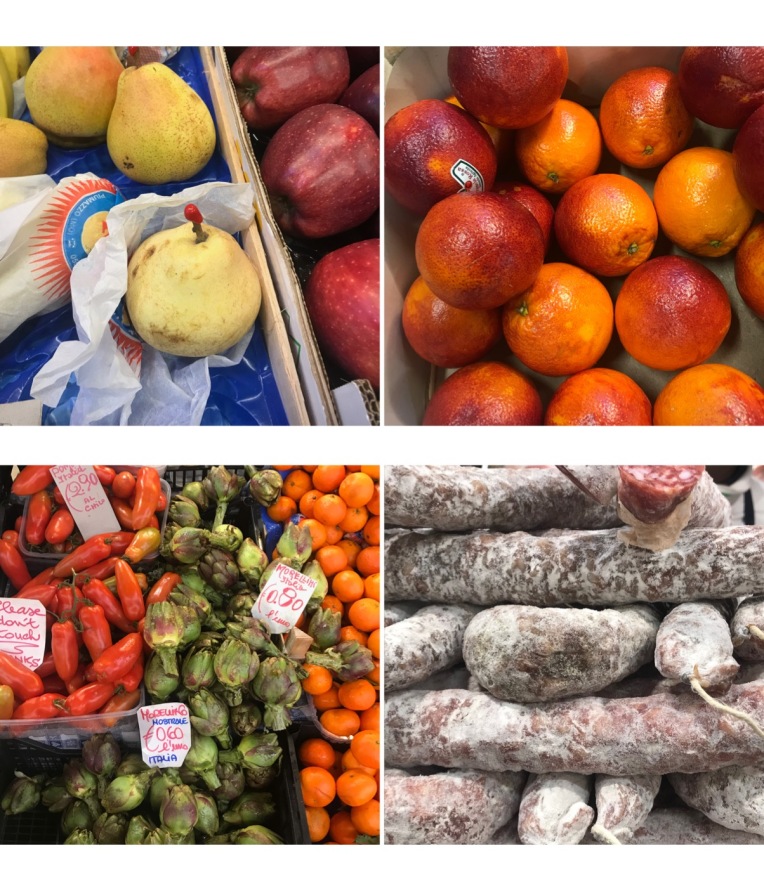 Florence’s late-19th-century steel-and-glass market building in San Lorenzo underwent a makeover in 2014 when the second floor was converted into a contemporary food hall. On the first floor of the structure, traditional butchers, fishmongers and fruit/vegetable vendors supply the Florentines. But climb the staircase to the upper level and enter Mercato Centrale, a food-lover’s’ heaven that showcases the very best of Italian regional food. It’s a lively space offering sensual overload, and the range of gustatory delights is nothing short of eye-popping. 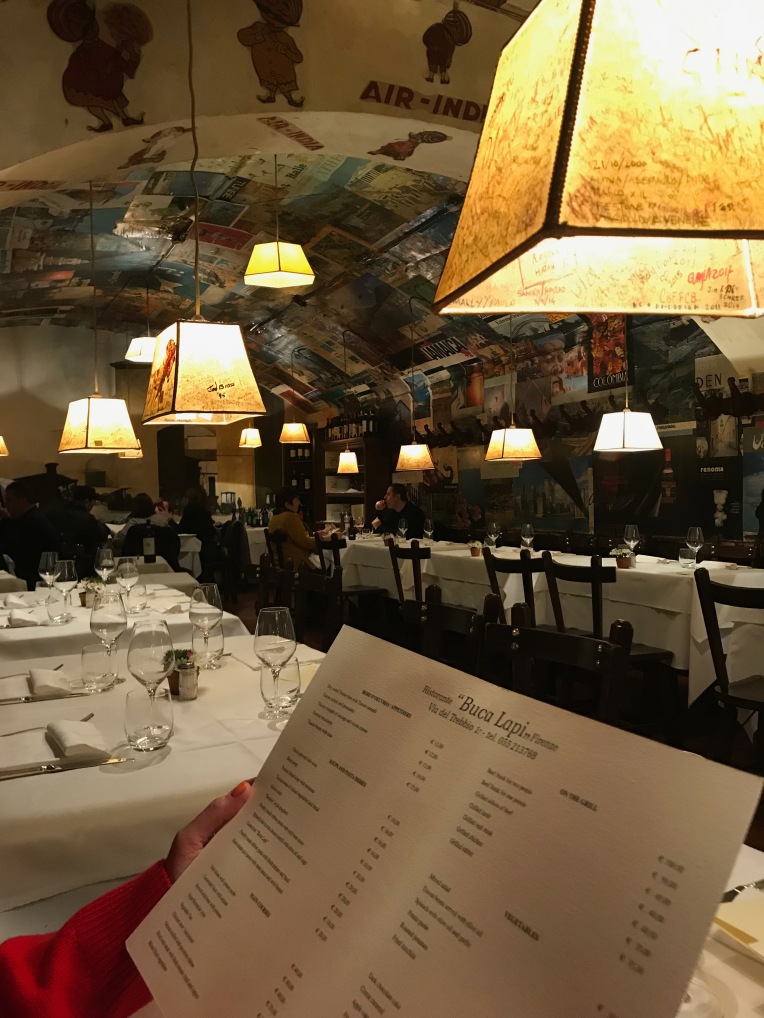 If you’ve been to Trattoria Sostanza (or didn’t catch a table…), go to Buca Lapi. It’s not as off-the-radar, but the restaurant serves classical, Tuscan food in a cozy, home-made way.

The name on everybody’s lips these days in Florence is La Ménagère, a space near San Lorenzo market that combines a restaurant, tapas bar, flower shop (which is actually the best part) and a home-accessories collection, concept-store-style. This place impresses with its details and is highly Instagrammable. Not entirely sure of the food though… 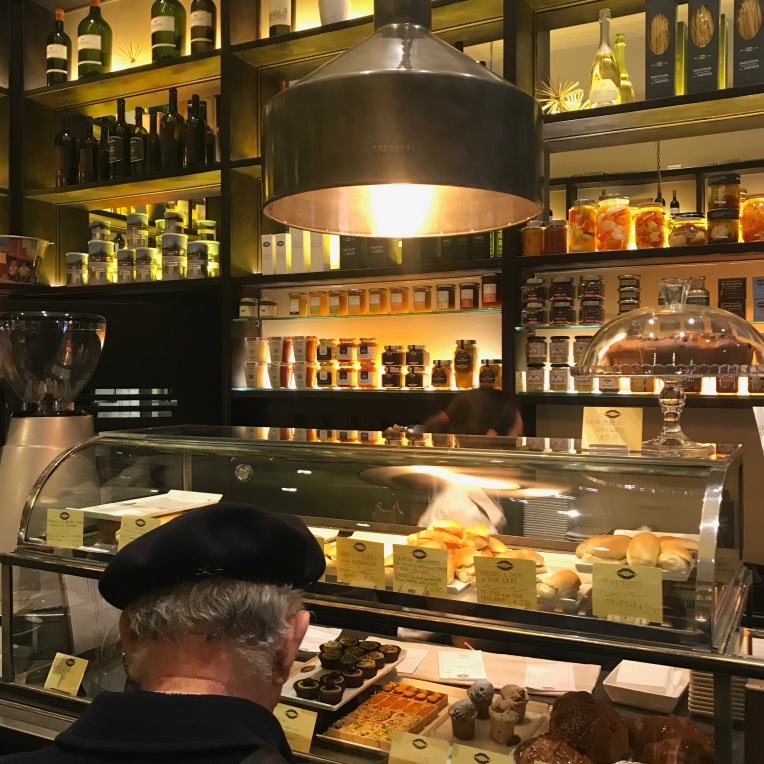 Procacci is this chic go-to spot for Florentines, who are exhausted after their shopping on the fancy Via de Tornabuoni. Delicious, little sandwhiches with truffle paste will make you addicted after the first bite… 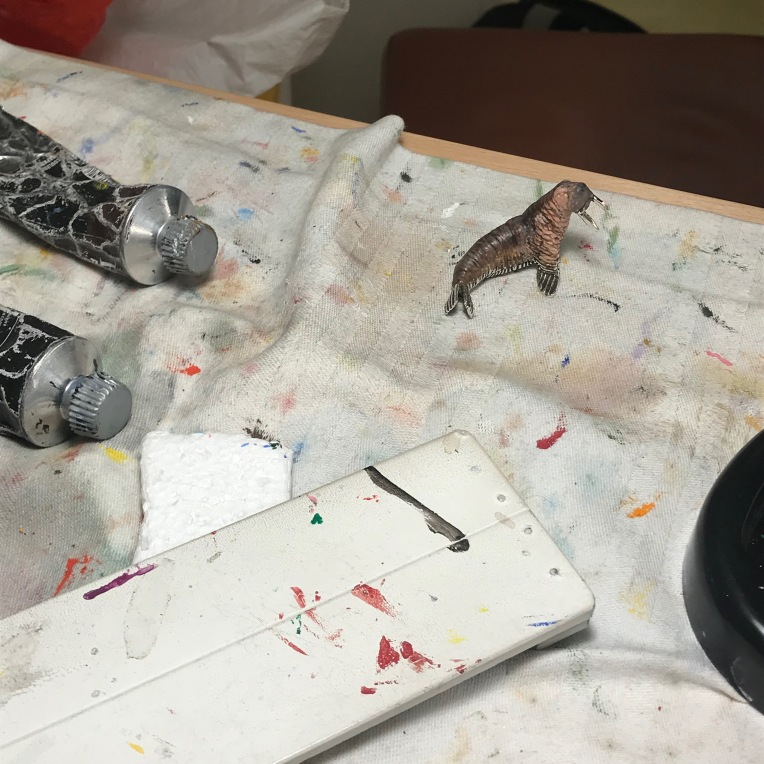 Florence is Gucci, Gucci is Florence. Gucci Garden is a must-see in this city, but I wouldn’t take it too seriously. I mean, it’s not a museum written with capital ‘M’. Still, it’s an experience, like anything Gucci and Alessandro Michele pull off together. Inside the historic Palazzo della Mercanzia, the museo is housed, conceived by creative director Alessandro Michele. The newly designed space features a store with one-of-a-kind items, the Gucci Osteria da Massimo Bottura and the Gucci Garden Galleria exhibition rooms curated by critic Maria Luisa Frisa. Divided into a series of themed rooms, the Gucci Garden Galleria narrates the brand’s new vision while celebrating the archives including old advertising campaigns, artisans’ images, retro objects. From the Double G motif to Michele’s Guccification, the house’s universe is presented in a subverted, slightly surreal way. ‘Paraphernalia’ is a room dedicated to signature codes and symbols that define Gucci’s identity while ‘Cosmorama’ reveals the historical jet-set customer of Gucci. My favourite part? Anything by Tom Ford (the white slit dress, iconic kamasutra bomber jacket…). Was quite surprised the brand completely erased Frida Gianini from its history, though… 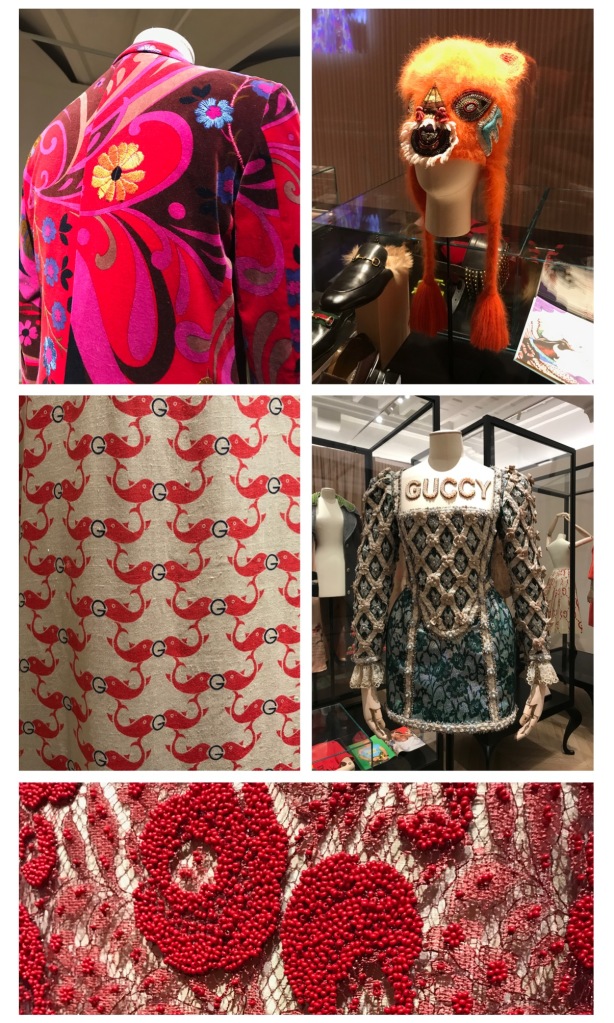