Usually, Marni‘s Franceso Risso takes us to a fairy-tale, where everything has a sort of out-of-this-world meaning. For spring-summer 2021, his collection is strikingly grounded. And literally, out in the world. “I don’t want to make any statements about this show, but this is the idea of it: the people, the individual stories, the lives, the awakenings, my awakening, and the connections,” Risso said in a press preview. “Lockdown felt very oppressive. I have a big dog, and whenever I’d go out, I had police sending me back home. It was strange; bad,” he recalled. While they sounded funny, stories of the Marni studio “making things at home with blankets [and] curtains, [and] dyeing things in their bathtubs” had a more introspective rather than creatively explosive impact on Risso’s approach for his spring proposal. The events of 2020 made him feel caged and powerless. The fragility of freedom was at the heart of this collection. After he finished it, he sent looks to friends and family around the world: Los Angeles, Detroit, Philadelphia, New York City, London, Milan, Paris, Dakar, Shanghai, and Tokyo. In a digital showcase livestreamed from all of those locations, his diverse cast of non-models performed what Risso called his “Marnifesto”: “An experiment of collective neo-humanism, which is so individualist, but actually, this has been collective. It’s celebrating Marni not through the I but through the we,” he explained. It was, quite simply, unity in diversity: Through live-recorded everyday scenarios like walks through traffic, trips to the park, band practice, or grocery shopping, it was an illustration of how we’re less fragile together. Working on the collection, Risso had pulled his most-loved pieces from the Marni archives, re-created them, took them apart, and stapled them back together in new ways. If that was an illustration of fragility versus strength in itself, so were the constructions: unraveling knitwear, de- and reconstructed tank dresses, a rigid, box-fresh leather jumpsuit about to get crinkled. It all felt somewhat “charity shop,” but that inevitably comes with the territory of fragility. Twenty-five coats had been made out of outerwear from old collections, patched together and painted with poetic words sent to Risso by friends through correspondence over the past season. “I can’t talk about hems and drapes and stripes,” Risso said. “I’m more inclined toward thinking of this as a work that’s been more collective than ever. It’s devoted to freedom, self-expression, to celebrating the hand that painted all those objects that create the canvas of Marni.” He didn’t just mean his studio, but the wild and wonderful characters who fill his unconventional mind, and indeed his nonconformist reality. Given the platform of his livestreamed video, they made Risso’s at times outlandish creations feel more real. Emancipated from the staged situation of a runway, you could actually see how the Marni universe manifests IRL. 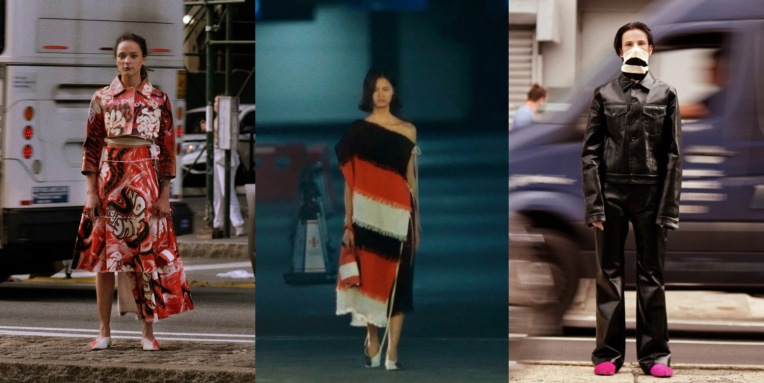 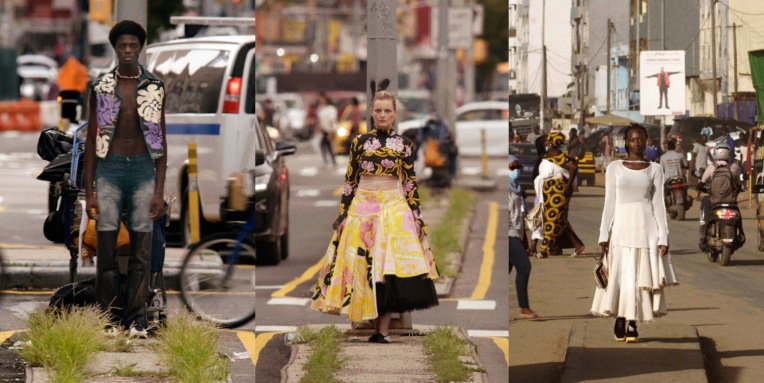 While the topic of sustainability seems to be utterly dormant in Milan, at least you’ve got Marni‘s Francesco Risso that takes some steps in order to address it. The collection used what appeared to be fragments of existing garments: take the cardigan dresses created from several different pieces of knitwear, each element linked with the crude stitchery of a child in a craft workshop. The remnant scraps produced in their manufacture, Risso noted, had been regenerated to create smaller elements such as the purses shaped like Victorian carpetbags or the old-fashioned wrestlers’ shoes. Risso described the effect as DIY, and the deliberate naivete continued with the magnificent finale pieces made using scraps of humble cotton fabric patchworked together with shards of cut velvet woven by hand in a factory in Venice on looms that were originally designed by Leonardo da Vinci – a vanishing, time-consuming craft that Risso understandably wants to “protect and exalt.” “They are basically our new furs,” he said of these precious garments. The collection, as the designer explained, was “collaged from the beginning to the end – from macro to micro to fractal. It’s about putting together remnants.” Julien d’Ys gold and silver dust make-up and lacquered hair on the models added even more spark to Risso’s wearable assemblage. Gorgeous. 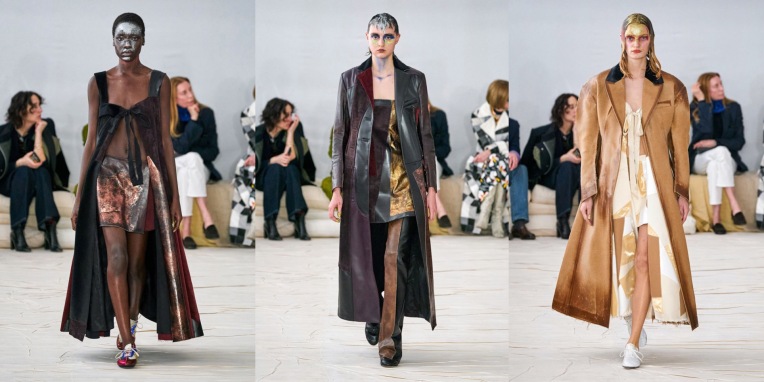 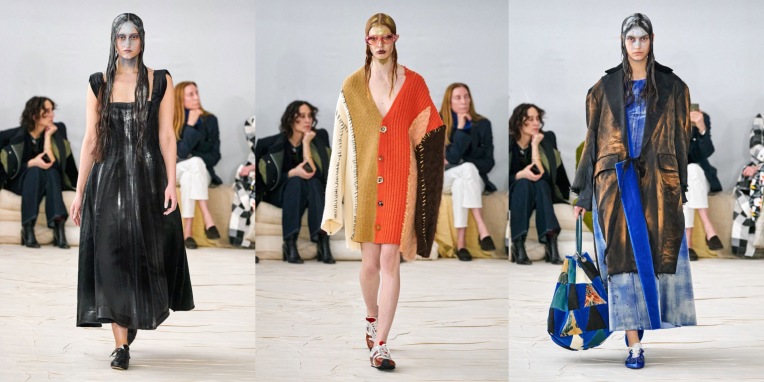 The audience was directed to a cavernous dark space, trespassing similarly dark tunnels outlined with thin, colored neon lights. The tunnel opened onto a pitch-black space with a labyrinthine neon-lit floor layout, with barely perceptible human silhouettes scattered around. The audience was kept standing. The Marni troupe (which was actually a dance collective, directed by Italian choreographer Michele Rizzo) emerged in slow-motion from obscurity as if in hypnotic trance. Awakening from their sleepy state, the dancers started moving and swaying to trance music, holding onto their spots as if glued to them. Then they started moving about at a snail’s pace. Then the beat and the energy changed abruptly and the Marni-clad collective started marching about as if propelled by a sudden urge, circling around in manic mode, until the pace wound way down again. This was no longer a fashion show, but an art performance. No wonder why focusing on the clothes was challenging. But still, the show wasn’t here to conceal the clothes. The fashion repertoire was highly eclectic, as usual from Franceso Risso. Tailoring mixed with big, slouchy shapes. Coats were bisected, jackets were dilated, sweaters fragmented and juxtaposed. Scraps of fabric were pieced together in patchworks. Nothing seemed to make sense – yet all coalesced beautifully into Marni’s stylish madness. But there’s no Marni show without a piece of Risso narrative. “It’s a dance which takes us to the end of love. The end and the beginning of love. I was thinking about Edgar Allan Poe’s ‘The Masque of The Read Death’ and about Prince Prospero,” said the designer. The story goes that Prince Prospero locks himself in an abbey with a crowd of friends for a masquerade ball, attempting to escape the plague. The Red Death infiltrates the abbey with exterminating results. “Today it was our court of Prince Prospero’s noble friends dancing to the end of love and locked in our castle,” continued Risso. “They are a collective in a never ending party, wearing multiform uniforms… objects with a life of their own, heirlooms, something we have to protect.” It’s not the first time when the designer goes apocalyptic. Theory aside, back to the clothes: they were made from assemblages of old scraps of fabrics and leftovers of 1950s deadstock. Risso’s poetic way of addressing new methods of creating and producing clothes (recycling, upcycling, assembling, reusing!) is a consistent approach, which still seems to be missing at other luxury brands. A big yes to this collection. 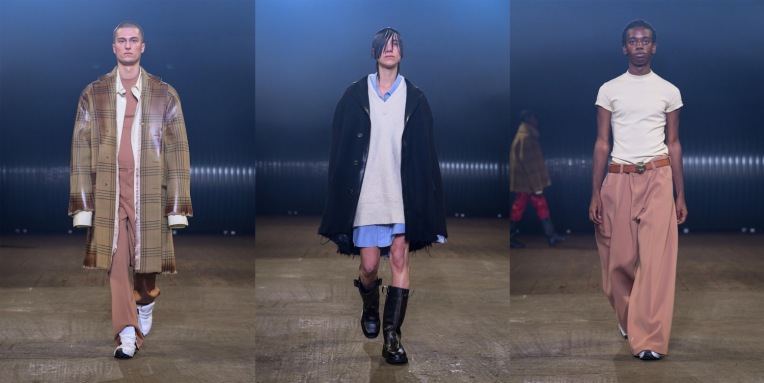 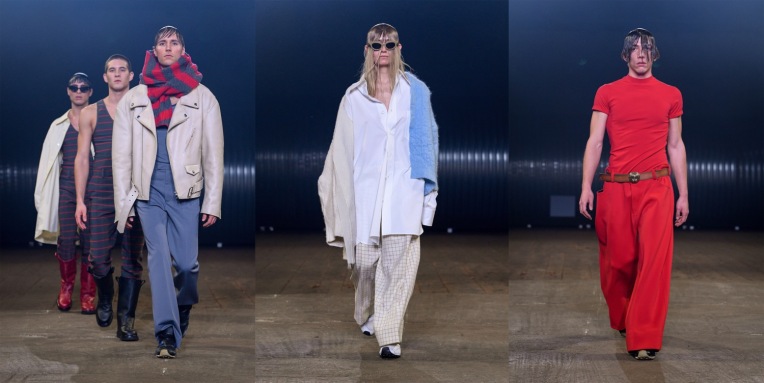 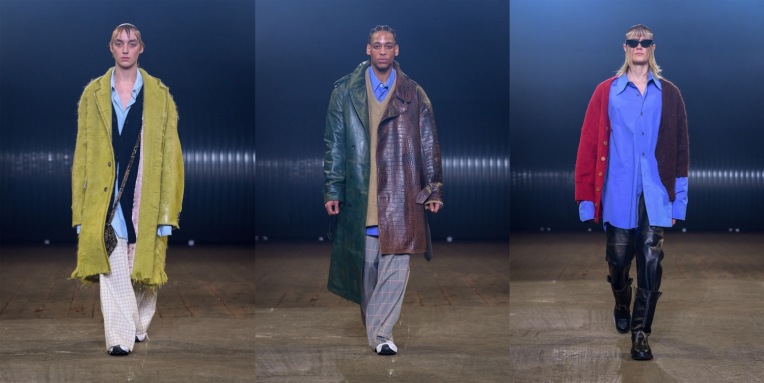 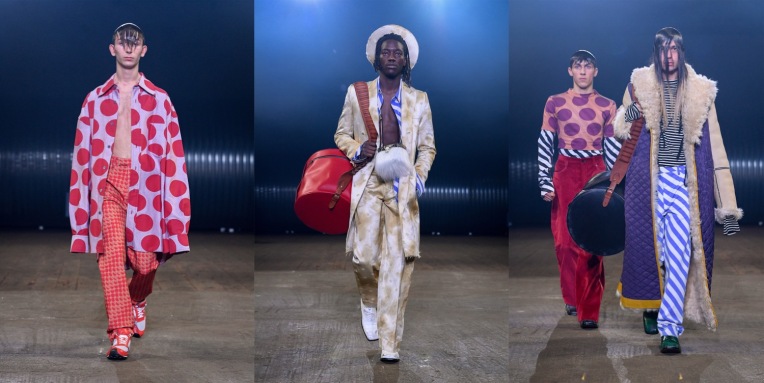 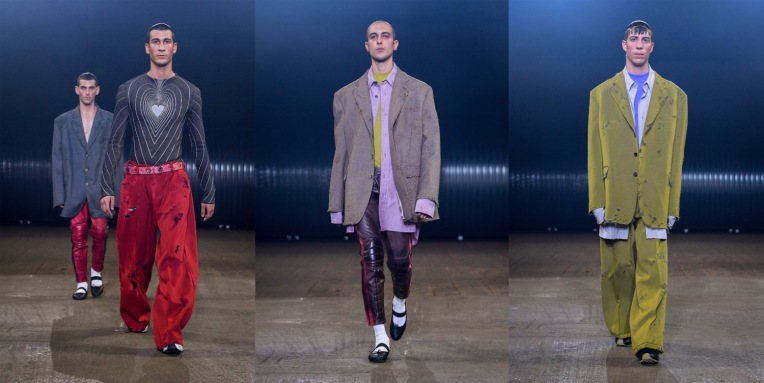 While one would think that the entire fashion industry wouldn’t really acknowledge the climate strike that happened across the world yesterday, it’s a relief to know there’s one designer who really cares. It’s Marni‘s Francesco Risso. Not only was the show’s setting considered in a sustainable way – guests sat on recompressed-cardboard benches under a recycled plastic jungle (made of reclaimed waste) – but also the new season clothes had a lot to do with this important topic. In his collection, Risso used upcycled textiles, organic cottons, and “recuperated” leathers in the most impressive ways. Balloon-smock tops paired with flared skirts, naive prints hand-painted by Francesco’s team, 1950s couture-inspired silhouettes that delivered a touch of eccentric elegance, chunky knits which hung asymmetrically. I also loved the fact that many of the pieces were aprons (that created an illusion of dresses) and were paired with full skirts. A novelty to try out next summer. All this was kept in a bold colour palette of orange, magenta and green, and was topped by Julien d’Ys’ incredible hair-styles that used dried flowers. Risso wanted to create a “joyous protest, an homage to nature and our sense of humanity”, and he succeeded. It’s truly reassuring to see a major Italian brand putting sustainability as its priority. And makes it look so good! 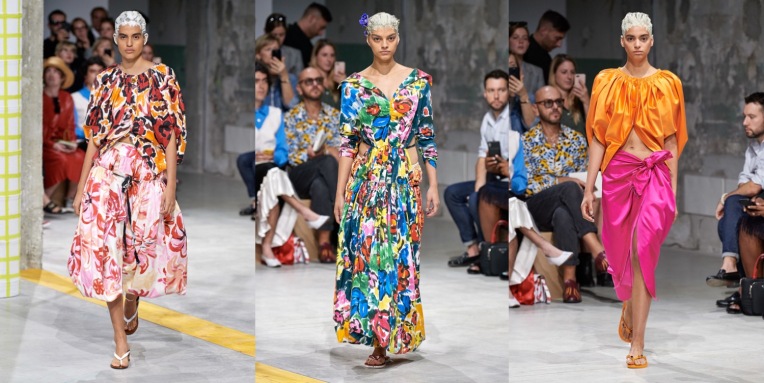 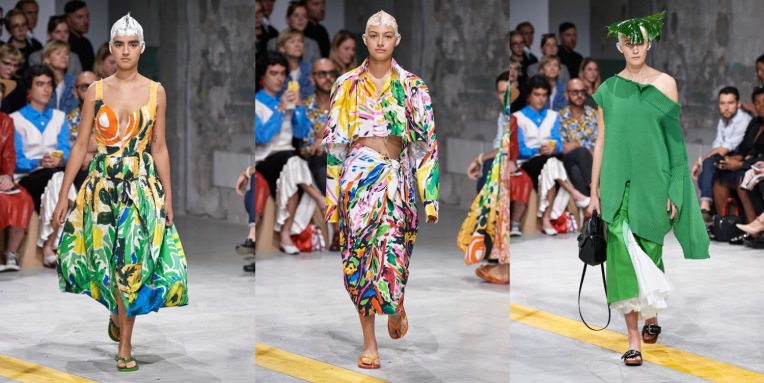 Francesco Risso moved big topics in his spring-summer 2020 collection for Marni, but in his typical, poetic, metaphor-filled manner. A fishnet was hovering about the guests’ heads, full of plastic debris collected from the oceans and from waste. Called Act1, the show was a conscious approach to engage in a deeper conversation on ethical values and a sustainable fashion practice: “We are here today to confirm our position in the world and to move towards action,” said Risso. “Let’s be vocal about our beliefs.“The designer has been implementing sustainable thinking into the brand for the last few seasons, but this really was a statement that hopefully will bud into real consciousness at the Italian brand. Even though you could expect exhausted eco warriors walk down the runway, Risso sent down a line-up of looks that sparked joy. It was a marriage of Truman Capote and Ernesto Che Guevara, beauty and rebellion. Marni’s rebels wore fabulous, crazy ritual totem-hats, made by artist Shalva Nikvashvili outof stuff that could have been easily thrown away to the trash: scraps of paper, feathers, plastic, fur, leather. The clothes as well had sustainable origin, to some extent. They had a sense of carefreeness, but weren’t ridiculousor clown-ish. Safari suitsweresplashed with brushstrokes, and cashmere and alpacas were patchworked with plastic and brocades. It all blended into a rather non-chalantly elegant,layered wardrobethat would be the fitting uniform for the Truman and the Che in an ideallypeaceful, eco-utopia.But you know what? I can equally see those clothes being worn in real life. 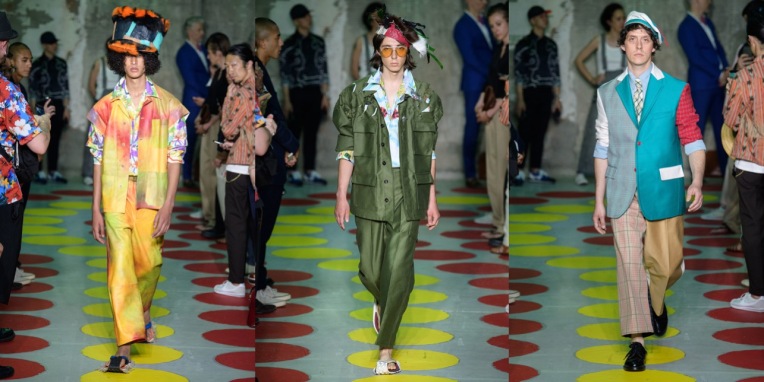