“This show is an open letter to Jean Paul, an open letter of love,” Olivier Rousteing announced in the Gaultier studio before the unveiling of the antic collection that Gaultier had invited him to design as the third iteration of the project that hands the reins of his couture house to a different designer each season. When the two designers first met to discuss the project four months ago, and right after Rousteing had presented his autumn-winter Balmain collection, he confided to Jean Paul Gaultier: “You’re my inspiration. And you broke so many boundaries for me as a kid.” Dressed backstage in a matelot striped top and an asymmetric kilt, Rousteing had clearly taken the brief very seriously. “Jean Paul wrote a fashion book with many chapters,” Rousteing explained. “And the reality is that you need to understand what chapter from Jean Paul is closer to you and the emotions that you obviously are more into.” For Rousteing, this meant a series of very personal snapshots. A memory of his father with Gaultier’s iconic Le Male fragrance in its tin can casing, for instance, or Madonna dressed by Gaultier in a nipple-freeing ensemble for a 1992 amfAR gala. “If you think about that today, we cannot [go there],” Rousteing noted, and in fact his iteration featured trompe l’oeil exposed breasts. “So he was ahead of his time about freedom of expression. Today, we talk about inclusivity, we talk about diversity, we talk about breaking boundaries, we talk about no binaries, no gender. Obviously, Jean Paul was the first one to do it.” Rousteing opened his show with menswear, inspired by the tattoo collection of 1994 that he considers a celebration of diversity, and then broke into one statement womenswear piece after another, playing on the Gaultier themes of corsetry, repurposed denim, and Breton fishermen’s sweaters, among others, many of the looks teetering on platform heels inspired by those tin cans.

And Rousteing reveled in the craftsmanship of Gaultier’s ateliers. In homage, there were garments fashioned from a dressmaker’s tape measures, a heart-shaped pin cushion bodice, and gloves with thimbles for finger tips. And noting the designer’s passion for the liquid draperies of Madame Grès (and the dressmaking genius who worked for her and now for Gaultier), Rousteing worked her iconic techniques into some looks that included a sweeping corseted pink sweatshirt that ballooned into an opera coat in back and draped into a siren skirt in front. Meanwhile, what appeared to be a woven menswear pinstripe was actually an illusion created with insertions of white crepe – a process that took 600 hours. Rousteing revisited Gaultier’s feathery interpretation of matelot stripes, another iteration of the Breton sweater that morphed into a Watteau train in back. In a further celebration of the craftsmanship of the house, the running order of the show listed each premiere main and modeliste responsible for the various elements of each look next to its description. Rousteing stepped out of the studios, however, to create a brace of molded glass bodices made by the expert responsible for the stained glass windows of Notre Dame, no less. Gaultier himself had wanted the collection to be a complete surprise. When the show opened with a soundtrack mashup of Gaultier himself expressing his design ideas to various media outlets through the years, he blushed bright pink. By the end of the show he was beaming. “Zat was fantastic!” he declared, “He took my things and then did it his way – and the technique – fab, fab, fab!”

Y/Project’s Glenn Martens unveiled his vision of Jean Paul Gaultier haute couture—the second designer to do so, after Chitose Abe of Sacai last season – and it appeared to be a heavenly match. What makes this collection so magical, so right and so much fun? It’s an escapist exercise in what you can do when you’re let loose in the wunderateliers that are the Gaultier workrooms. Plus, as we all well know, Martens knows how to make a brilliant and inventive silhouette. One of the looks he was furiously working on is a Breton marinière which has been turned into a dress and then hand-embroidered to ripple 3D-style with hundreds of faux coral fronds. The sailor stripes are pure Gaultier, yet the twists to this dress – the folded-over shoulder line, the knit panel which sinuously and unexpectedly juts out from the left hip – are pure Martens at Y/Project. “I am only doing this for one season, so it’s not like I have to envision a whole new future for the house; that’s a very different exercise,” Martens said. “This is a celebration of Gaultier. I’ve stayed close to the woman Jean Paul created in the past—pure diva goddess beauty, hips, whatever, all that drama he loved. I’m building on that through what I think of his iconic Gaultier moments. This marinière…it’s so him, but I completely fucked it up with all the fake coral spikes. I’m reinventing those iconic moments in my own way.” That’s what makes Martens’s version of Gaultier couture fly: the acknowledgement that it can’t be a retread of the past glories of one of fashion’s greatest designers, but instead honor what went before and incorporate the best of yourself. It is not C as in collaboration ( a word which is looking increasingly passé) but C as in conversation, a constant state of respectfully going back and forth between incoming designer and the heritage of the house.

That marinière dress was sandwiched between a series of corseted jacquard knit looks, whose body molding striations recall ’90s Gaultier and plenty of gorgeous, ethereal evening dresses, confections of chiffon selvedge, whose lightness were amplified by the ferocious ingenuity of their barely visible inner constructions. One, in black chiffon across a delicately pale pink corset, was a particular knockout. The interaction between the two visions continued with an evening gown in a boudoir-y, peignoir-y ’30s peach which looked like a deconstructed corset, the lacing asymmetrically blown up across the billowing skirts, while a cream knit sweater dress featured cable panels that intersected, baring a little skin along the way. Elsewhere, those wired experimental volumes Martens loves so much figured prominently, in red velvet or green taffeta, as did a wink-wink to Y/Project with the Y shaping of the hips on some of his silhouettes, his own version of the classic hourglass but reimagined for today. Martens was drafted in to do this collection two years ago, so because of the pandemic, it has been in gestation for a while. Yet, despite that, it feels hardwired to the moment. While it will very likely appeal to Gaultier couture loyalists, it will also speak to today’s fashion-savvy IG generation who applaud every big gesture and historically savvy flourish.

There was a lot to unpack in this men’s autumn-winter and women’s pre-fall 2022 Y/Project show. This must be why it was held in a spaceship-sized logistics artery on the northern edge of Paris that every day, all day, connects freight trains and trucks bringing goods into the city with 23 loading bays’ worth of courier vehicles. The epic venue offered beyond-enough room for social distancing. And it made for a runway so long that by my watch it took a full four minutes for the models to transit from one end to the other. Amongst the models were two fashion insiders that are close to Glenn Martens: Camille Bidault-Waddington and Olivier Theyskens. Theyskens said just before the show started: “Glenn proposed it to me. I know him and I love him. We work in the same neighborhood and we both come from Belgium.” The next highlight of the collection: the creative presence of Jean Paul Gaultier. Next week during the haute couture presentations, Martens will moonlight as a one-season only creative director for Jean Paul Gaultier. At this ready-to-wear show, Martens presented first hints of the dialogue: “We took one of his most iconic prints and we interpreted it in a Y/Project way. It’s very layered – you have men’s prints and women’s prints and they go on top of each other.” The trompe l’oeil body prints and penis pants that Martens was referring to, and which will be part of Y/Project’s Gaultier-facing ready-to-wear capsule, were certainly striking and worked well with the Belgian designer’s signature garment distortion.

Luckily for the fashion world, Jean Paul Gaultier is back. And his new, collaborative take on couture makes his brand feel fresh and relevant. Sacai’s Chitose Abe is known for her genius for grafting two different garments together to create a sui generis ensemble, so the idea of grafting her sensibility onto that of Jean Paul Gaultier – a designer that she has long admired – seemed like the basis for an exciting dialogue. It was one that Gaultier himself suggested as part of his elegant disruption strategy following his “retirement” from the conventional fashion system. “It was a very intimate, more friendly proposal,” recalled Abe backstage before the unveiling of her Gaultier takeover, “an invitation to come over for tea. It didn’t feel like two companies coming together, but instead like two people.” Haute couture wasn’t something that Sacai had necessarily thought about before, but she acknowledged that it was “a really spectacular experience. The level of perfection is something that Jean Paul and I share,” she explained, “and it made the process so smooth.” Her couture touches included the hidden luxury of dozens of tiny ruffled flounces buoying up the inside of a skirt, and the stripes of Gaultier’s iconic blue and white matelot sweater worked with insertions of satin organza, or seeming to evaporate into wisps of chiffon. Abe knows Gaultier’s work so well that she admitted she didn’t even have to consult the archives. “I didn’t want to take the archives too literally,” she added, “but to make it Sacai and very, very up to date.” So for look number one, Gaultier’s iconic autumn 1984 conical bra emerged from a deconstructed man’s navy pinstripe suit reimagined as a corset and overskirt, and worn over the tattoo print mesh second-skin pieces that reappeared throughout the collection and represented a collaboration with the tattoo artist Dr. Woo. It helps, of course, that there are some shared codes between Gaultier and Abe that she worked into the collection like a love for tartan, a refined take on punk, the co-opting of traditional men’s suiting fabrics, and the reimagining of the trench coat and Aran sweater. That tartan was redone as a sophisticated assemblage of chiffon pieces worked into a fluttering dress, and those pinstripes were reinvented as a high waisted dress crafted as though it was made from an enormous pair of trousers, the abundance of fabric pleated into fullness. The trench coat was re-conceived as a skirt with the volumes of an Elizabethan farthingale, and samples of different ivory Aran knits were patched onto a chiffon dress. On close inspection, the military braid turned out to have been embroidered from safety pins. Gaultier joined Abe for the finale runway walk and delighted the crowds on the street outside when he joined her on the balcony of his imposing Belle Epoque HQ with the models crowding the windows around them. Can’t wait to see who Jean Paul invites next season. 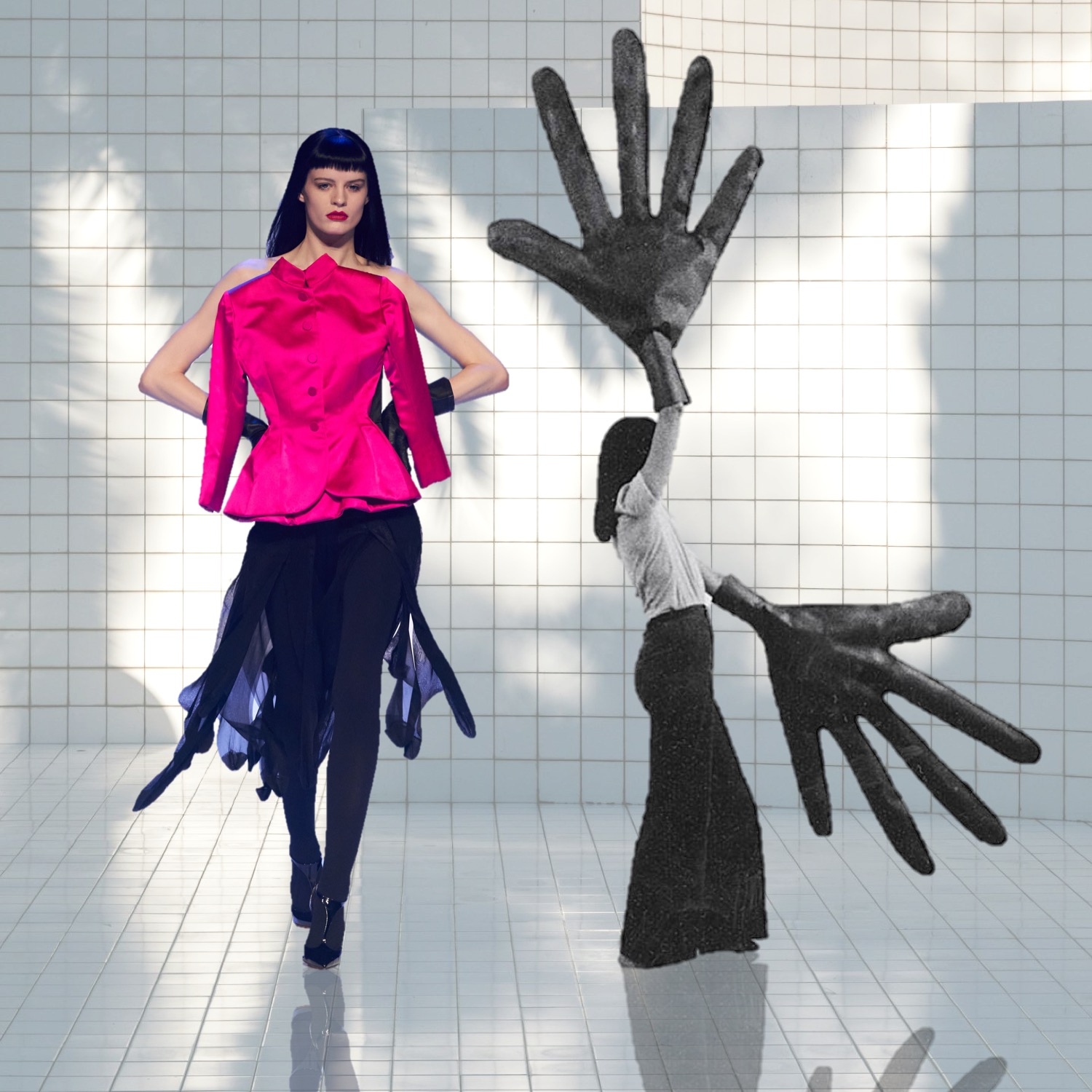 Euphoric. Bold. Joyous. Fantastic. Pushing boundaries. Forever iconic. That’s Jean Paul Gaultier. Many of the conversations we are having today – about such issues as diversity, gender fluidity, recycling, and sustainability – are built into the Gaultier DNA, and reused by other designer subconsciously. Since his first show in 1976, he has shown pan-generational models of all sizes, genders, and ethnicities on his runway, because they reflected the real-life people on the streets who inspired his style. Rossy De Palma, Blond Ambition Tour cone bras, Dita Von Teese, leather, trompe l’oeil, Beatrice Dalle, France, queer, sailors, sex, body… COUTURE! Although it’s Gaultier’s last fashion show ever, it’s not the end of his career. Can’t wait to see what he’s up to next! 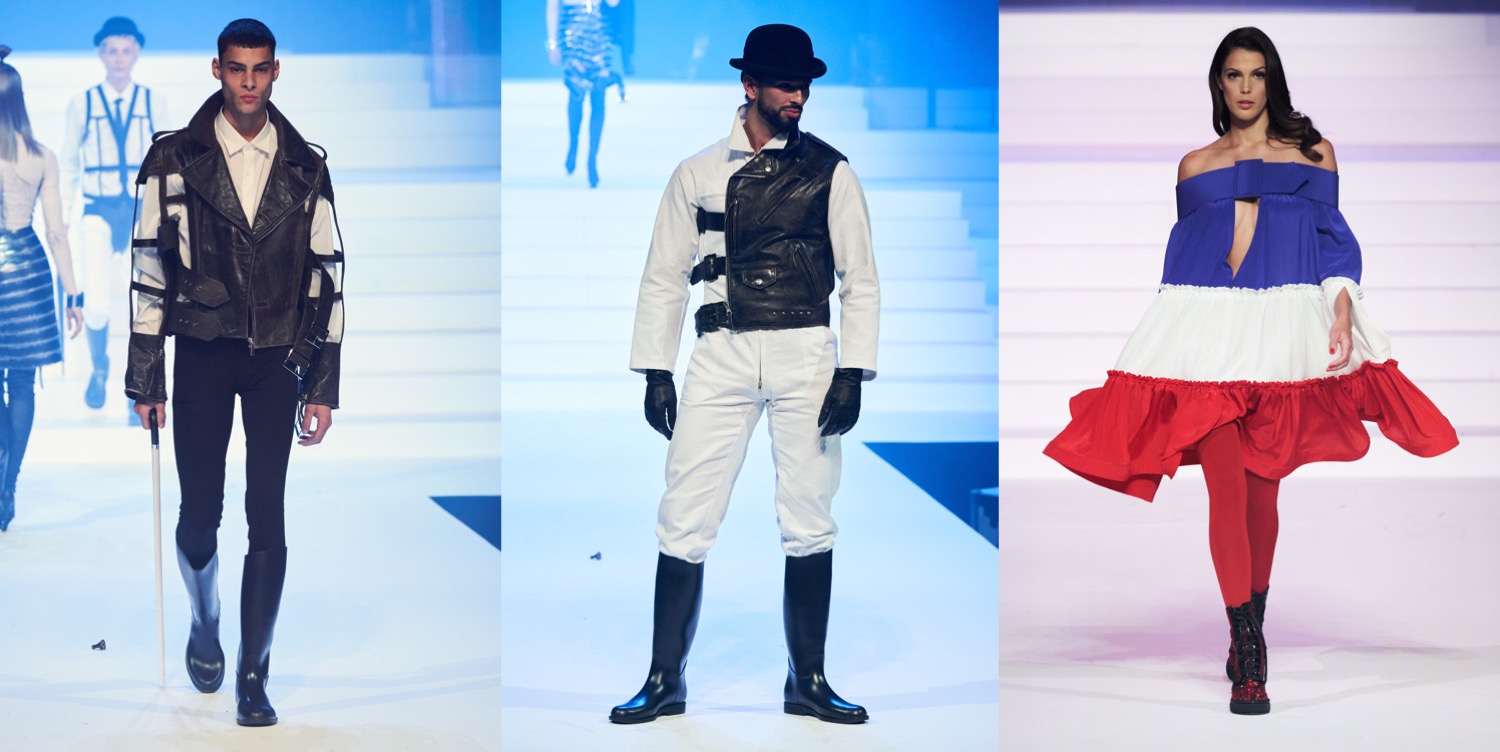 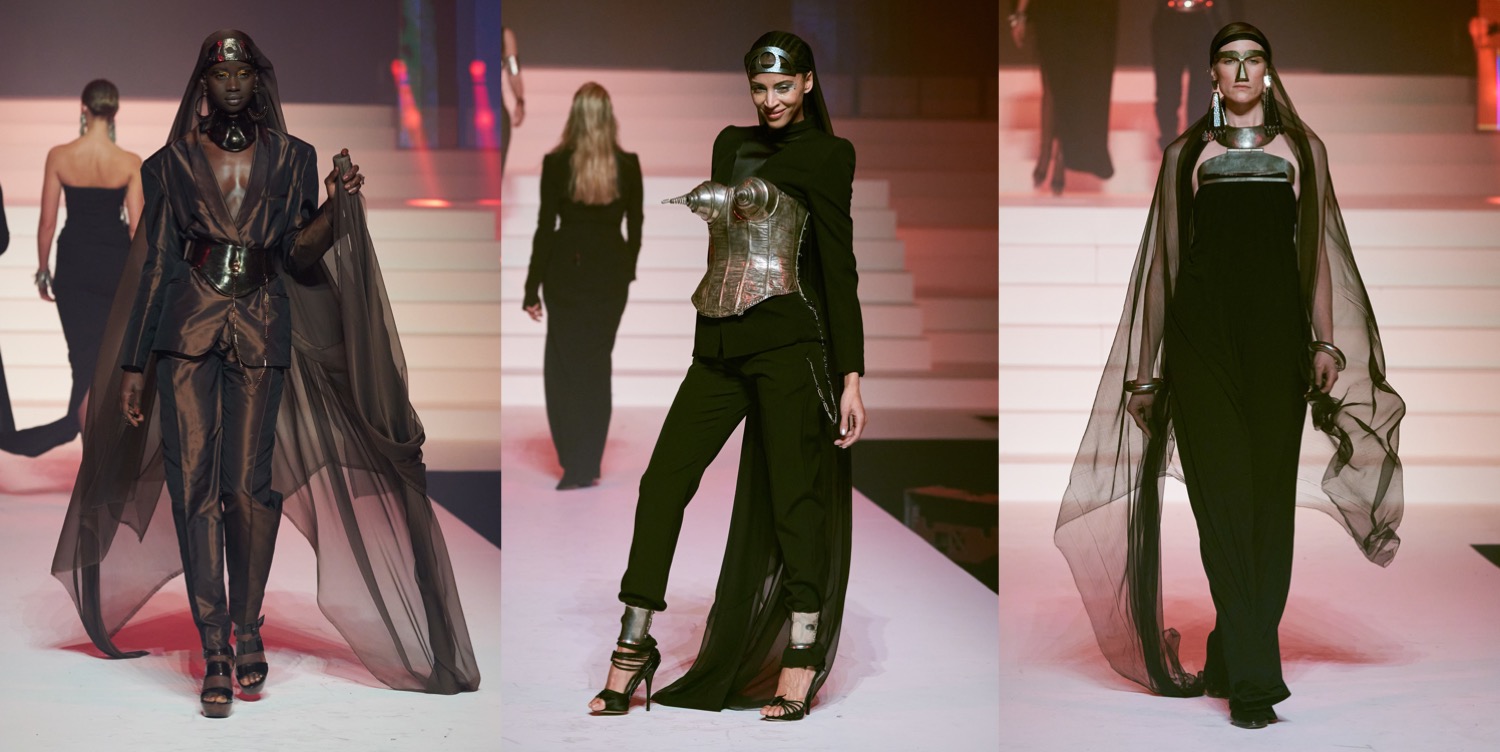 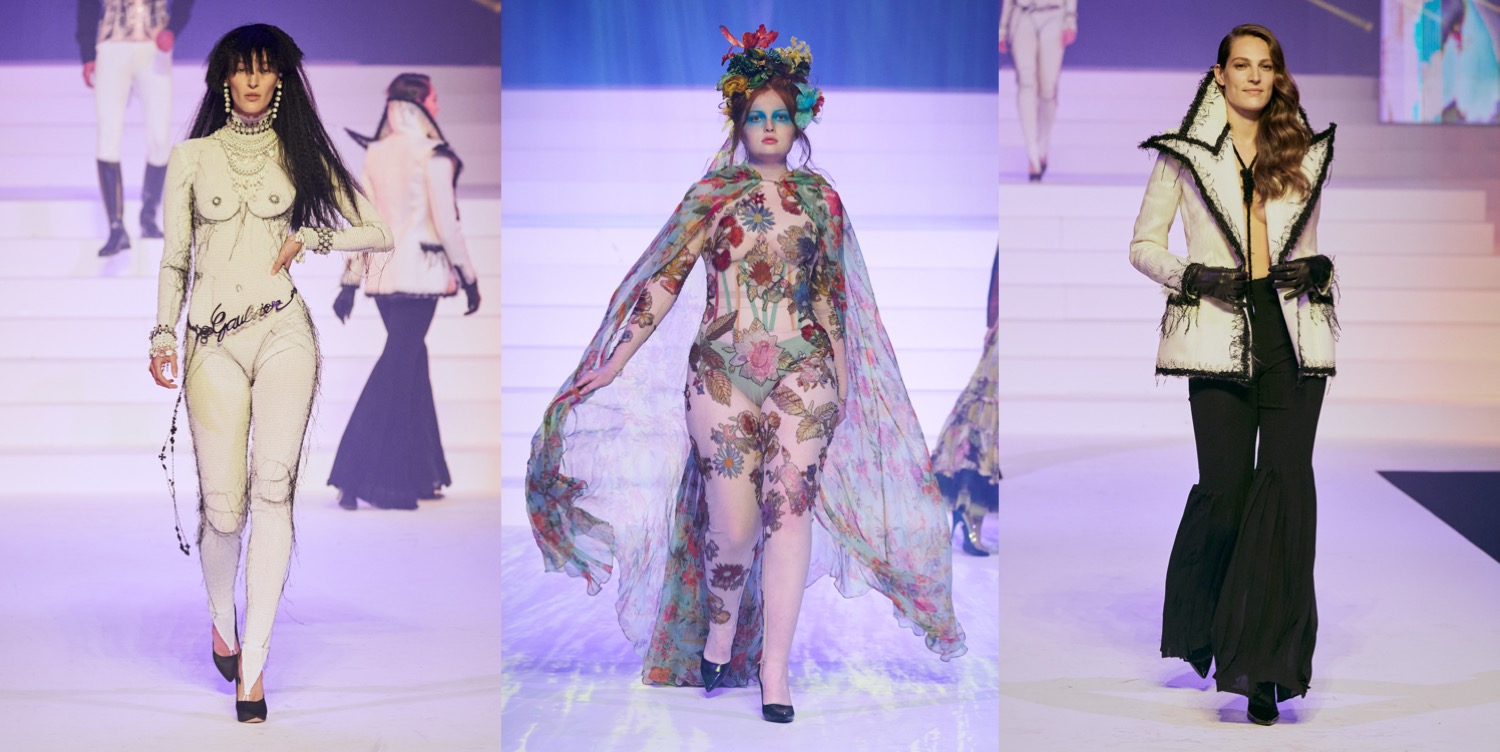 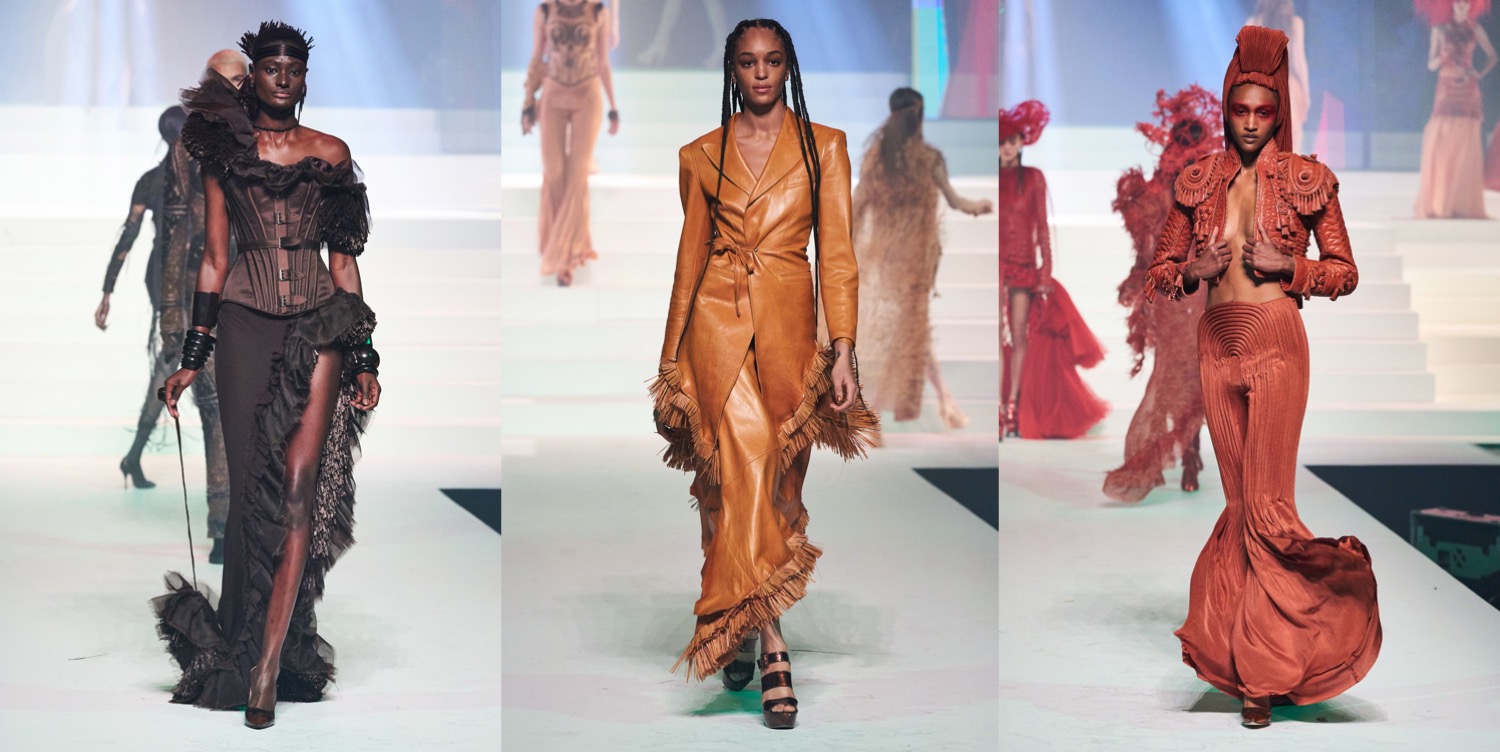