After exiting Burberry, Riccardo Tisci should return to Givenchy. It would be a perfect homecoming, because it seems only he could understand how to direct the brand in contemporary times. Seasons come and go, and Matthew Williams still has no clue what’s Givenchy’s identity, and what’s worse, what’s his role in writing the house’s history. It’s really difficult to find the spirit of Givenchy, properly revisited, and any signs of Williams’ input in the spring-summer 2023 collection. Even Carine Roitfeld’s styling didn’t help (quite ironic – she was a key person for the brand during Tisci’s reign). The line-up was a mash-up of familiar things. We’ve got some random-looking Chanel tweeds. There’s early Demna for Balenciaga vibe. There’s Hedi Slimane’s Celine, over and over again. Hoodies worn under blazers, styled with cargo shorts, seem to be the biggest takeaway from the entire line-up, but we’ve seen that styling trick many, many times on other runways. The eveningwear had no novelty in it, as it referenced Hubert De Givenchy’s archives in form of boring „re-editions”. And it felt completely out of place after a line-up filled with denim and combats. The inconsistency of the collection was the most striking thing about it. Also, what’s the point of having an outdoor presentation in October, especially in drizzling Paris? The pouring rain made the whole event feel even more depressing and frustrating. Williams’ contract at Givenchy is coming to an end, and I doubt it will be prolonged. The brand should really consider the choice of next creative director, because with the flow of time, the brand is becoming a wreck.

To be honest, except for beautiful couture moments, Clare Waight Keller’s Givenchy was a yawn. But when I heard that Matthew M. Williams is the new creative director, I was skeptical – I never understood what’s his Alyx is all about. To my surprise, his debut collection for the French maison was pretty good, closer to Riccardo Tisci’s years when the brand was a fusion of dark elegance and a fresh look at “street-wear” (I dread this word, because it got completely distorted throughout the years). During the Paris presentation (no fashion show, but a look-book), placed front and center was his new lock jewelry inspired by those hung on the bridges of Paris by tourist lovebirds, who throw the key in the Seine. “It’s no secret that I’m really into hardware, and that’s what I lay the foundation with when I start a new project. It comes into shoes, bags, clothing,” he said. Williams is also obsessed with texture – from the reptilian to the volcanic and the densely embellished – as fervently illustrated at his own label. His Givenchy debut read entirely like a morph between those codes and the black-clad elegance of the house he now inhabits. Suspended between the formal and the super casual, the devil was in the fabric treatments. There’s a twisted expensiveness about Williams’s clothes that feels good and dirty all at once. What’s interesting, Williams hadn’t worked with a particular inspiration. “I’m not a person who designs in themes. It’s very much product-focused. A lot of it is what I would wear personally,” he explained, adding he did take a trip to the archives that birthed some horn heels informed by Alexander McQueen’s era, and nods to Hubert de Givenchy evident in some rigorous tailoring. The focus on product was seemingly an unemotional process that paid off in the precision of design clearly made to be instantly coveted: mushroomed slides, politely stompy black leather boots, magnified takes on existing bags. There weren’t many logos around – which I appreciate a lot. Williams isn’t mad about them. “It’s funny that I get lumped into people expecting that I do that, which I don’t really understand because at Alyx we don’t do that either,” he noted. Instead, he wants his hardware to replace the role of logos. In fact, Williams’s vision for the Givenchy woman – “very elegant and powerful and chic” – was remarkably graphic and decorative. A transparent white coat covered in fuzzy tinsel, worn over a white laser-cut top that looked like a bustier made from ribbon, with cream trousers, was simply gagging for a scene in an early 2000s music video. This will sell well, I guess. 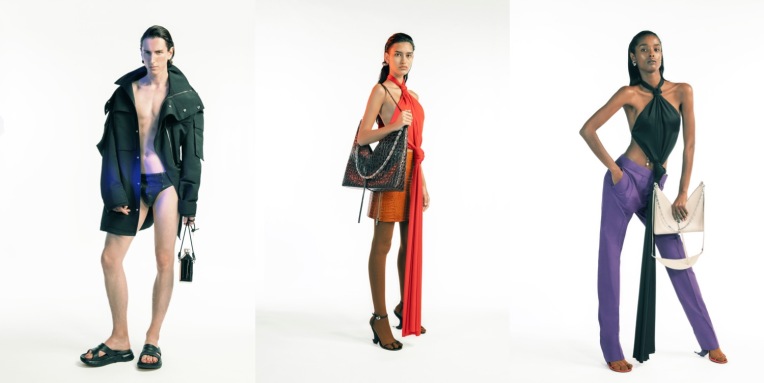