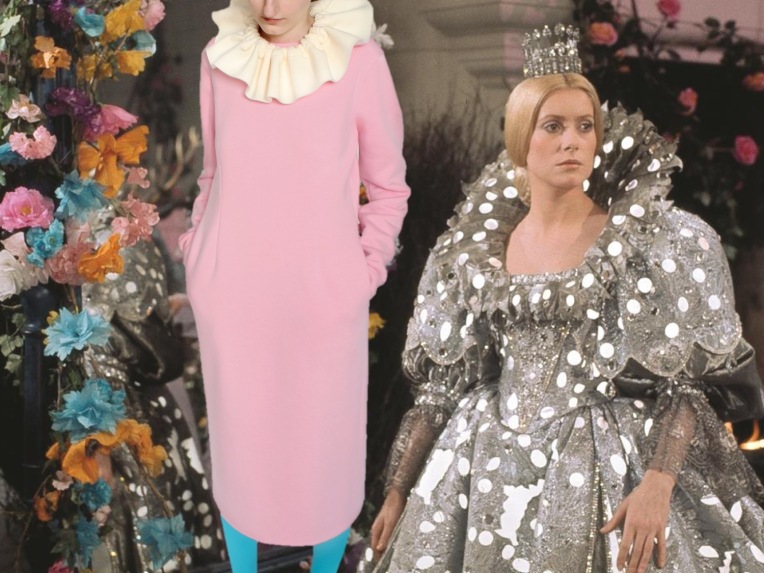 Donis Pouppis and Nina Neretina’s Nina Donis label is legendary within the Russian fashion industry. The duo met in the late 1980s while in university for textiles and started their own line, which they officially launched in 2000. The two went on to show at London Fashion Week for several seasons, but Moscow felt more like home. Now, the pair splits their time between Pouppis’s childhood home of Cyprus and the Russian capital, where the brand has amassed a dedicated following. As inspiration, they often look to Russian motifs, like Olympic uniforms and Russian traditional dress. For autumn-winter 2020, one might note a colour palette as bold as the one of Kazimir Malevich (or Pantone matching system). The duo were as well inspired by Jamie Julien Brown’s totem installations (the striped pieces!) as well as historic collars seen in El Greco’s portraits, deconstructed into verstaile accessories you can wear over a sweatshirt-dress or minimal knit. The collection’s must-have? Definitely here for the voluminous, yellow blouson with exaggerated bows down the sleeves. If you want to see more of Nina Donis, click here!

Gosha Rubchinkiy is the guy from Moscow, who brings on the nostalgic ideas of post-soviet Russia and its “fashion”. Soviet sportswear and Iron Curtain era was mentioned in the collection, too, by presenting the infamous symbols and dates on shirts and t-shirts. The silhouettes of jumpers were inspired by Eastern-bloc athletes (all the Russian flag colours) and the short shorts would be perfect for PE classes. Even the venue had something to do with sports – the oldest basketball gym of France was the venue of the show. But the overall effect of this collection seems to be the same as usually in case of Gosha – strong homage to his homeland and a kind of irony perceived in the air toward’s Russia today. 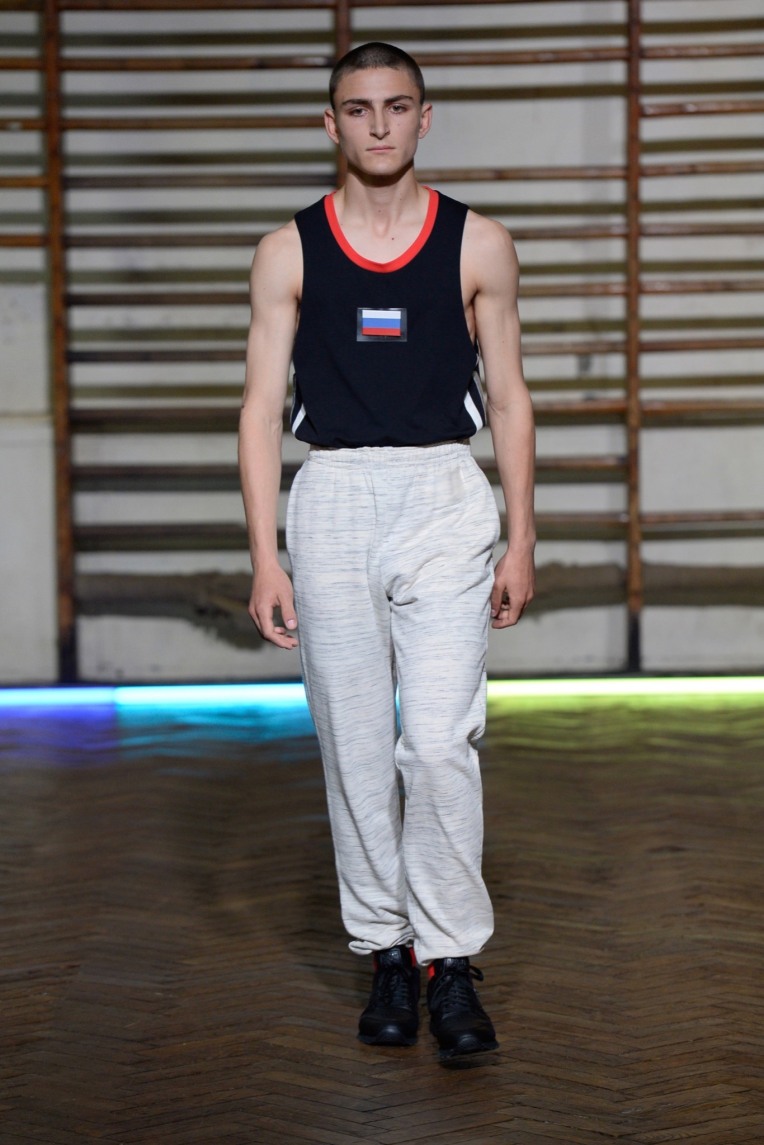 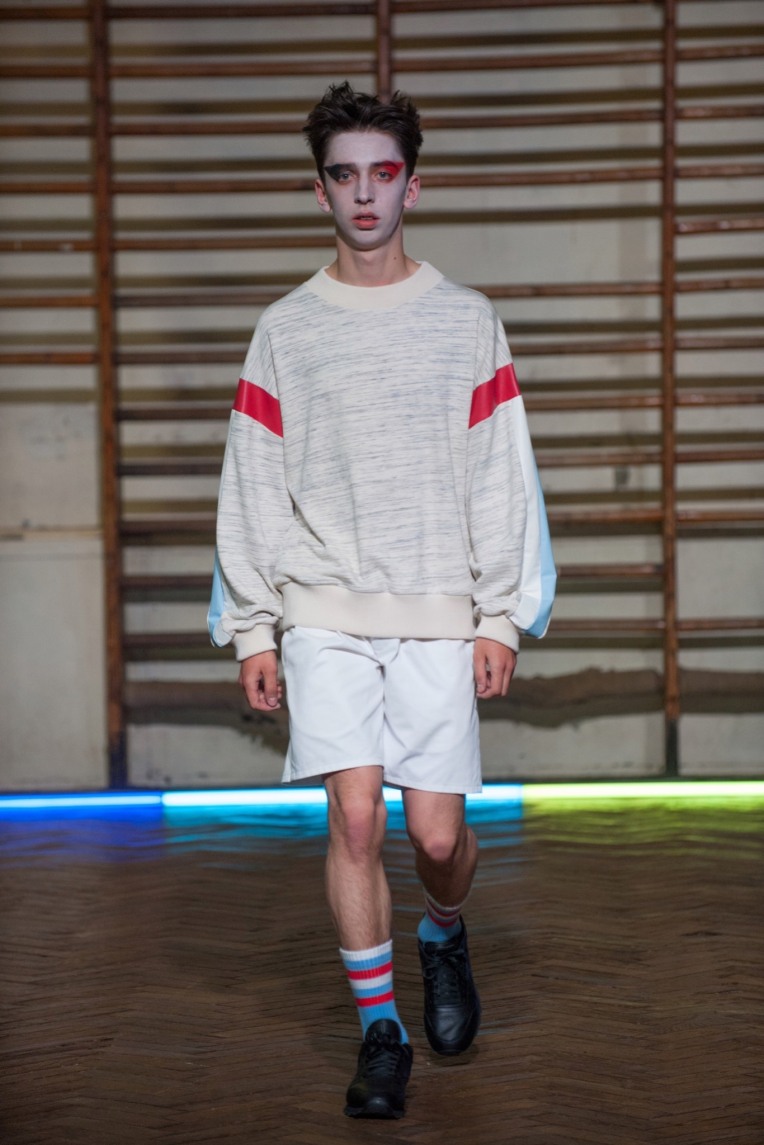 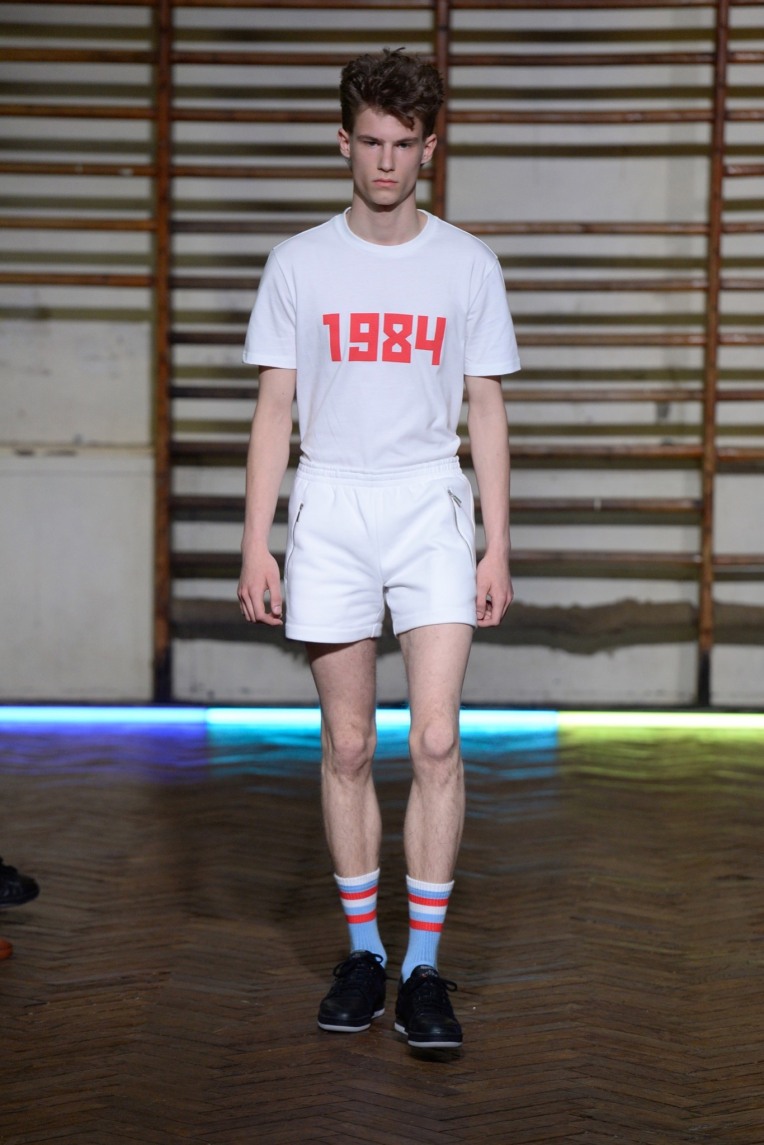 That wasn’t another Russian fashion fairy-tale at Ulyana Sergeenko this time. Thinking of the critical situation in Ukraine, Ulyana was inspired by USSR emerge in Russia, after the czar fell off the status. In the end, the show wasn’t as politically charged as all that setup suggests, and it was probably better for it. The officer’s coat gave way to a crystal-covered opera coat. A starring role was played by vibrant gradient-knit mohair sweaters inspired by constructivist artist Kazimir Malevich, and Sergeenko’s familiar molded bustiers—in satin under bias-cut chiffon, and in leather over silk pajama separates.There was also a sexy boudoir feeling all over it- lace and transparency.

Gosha Rubchinskiy, Russia’s young fashion star just came for the Paris fashion week, to show his SS15 collection for men. And that’s surely something, that the Parisian fashion scene never have seen (although they had other Russians, like Vika Gazinskaya or Ulyana Sergeenko). Known for his post-Soviet, skater style and street influenced clothes, thanks to Comme des Garcons he found his place here. One of his first customers back in 2010 was Dover Street Market, which opened a corner for the post-Soviet brand in its London store, and in 2012, Comme des Garçons took on production and distribution. As he says, his clothes are made in mind for Russia’s post-1991 generation, those who grew up in the midst of a reawakening of religious roots in the post-Soviet boom-or-bust economy. For spring, Rubchinskiy showed leather jackets, fur coats, canvas shirts, skater sweatpants and silent, white t-shirts with his logo written in Russian. In my opinion, everything here is wearable, and all of it is really cool. But are these clothes so, so breath-taking? 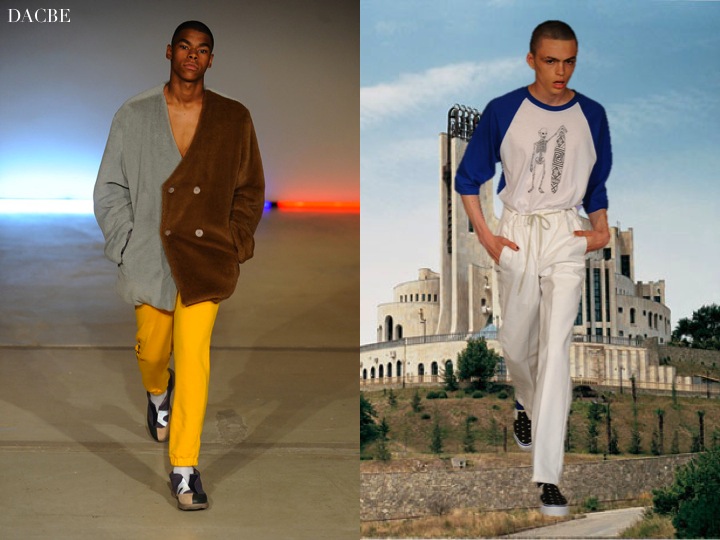 I am so excited to present my friends label, VIKAJULIA, which has just presented their amazing new collection! Both of them, Victoria and Julia, are from Russia and they create fashion that is modern, humanistic and very extraordinary. I fell in love from the first sight in these flawless dresses they offer; also, the fabric usage is great. When I look at these clothes, I imagine the dramatic sea life: the black material flows in the blues and the sea shell forms make me want to think of water adventures… these two seem to be a really hot thing from Moscow, so better keep an eye on these girls! Here is the mix of my favourite outfits: