Being a small label, even an established one, might be even more nerve-wracking in the uncertain nearly-post-corona times, than when the pandemy striked in the beginning of spring and the whole population was equally confined and paralysed by the new reality. Just think of Sies Marjan, the New York-bsed brand designed by Sander Lak that seemed to thrive in its five-year existence, and then suddenly closed just a few days ago – due to the crisis. But then, not all young brands seem to be totally doomed. Cecilie Bahnsen, for instance, has a very distinct, signature product – her dreamy, ethereal cloudy-puffy dress – which has organically built a fandom around her small Danish label. She even released a resort 2021 look-book, something many labels quit or have delays with. And the idea behind this collection shows just how much the designer has grown and reconsidered her brand. Using 100% upcycled fabrics from previous collections – a response to lockdown limitations – Bahnsen created corseted and peplumed dresses and tops decked out with lace, as well as witchy black coats and jackets. Other pieces combine patchworks of quilting, embroidered organza, and sheer silk faille. One of the most dynamic looks in the collection was a canary yellow frock with a spliced-up cable-knit sweater and a caged floral overlay on the skirt. Another was a hybridized white sweater top and dress featuring no fewer than five different fabrics from Bahnsen’s archive. Moreover, the designer plans to continue experimenting with upcycling and will release smaller, monthly capsule collections made entirely from stockpiled fabrics under the name Encore. This month’s features not just dresses but also blankets and pillows. Speaking from her studio in Copenhagen, Bahnsen told Vogue she’s focused on accessibility: “I want the dresses and everything else to be worn in the streets, not just during special occasions. This was a creative challenge, as I normally work very clean and don’t like to mix too much. But I knew there were a lot of ideas hidden in these old fabrics, and I needed to reflect on them, to maybe be less precious and to give them new value.” Two take-aways from this small capsule: Bahnsen has a distinct point of view and it was satisfying to see her play around with it a bit more freely, mashing things up and giving new life to unused materials.

Marine Serre predicts the future. Last season, the sight of masked models might have felt sligtly too dark and painfully dystopian. Today, the threat of corona virus paralyses Europe, and people go crazy for masks. For autumn-winter 2020, Serre also sent out a number of “protection-wear” looks, but this time, some rays of bright future are seen on the horizon. “It’s quite stormy right now,” she said, “yet we have to see a future in that. It’s about finding ourselves there—understanding it and embracing it.” The designer tumbled deep down into the futurist wormhole, exploring fashion on a distant future planet. Her every-age-imaginable model cast, even feauturing the models’ actual kids, underscored that it’s about more than her own generation: we are really all in this together. There was a series of sandy denim pieces with a distressed scorched effect, allowing some new kind of warped beauty to emerge; their hue also riffed back to Frank Herbert’s “Dune”, which Serre quoted on her invitation, inspired, she said, by its depiction of new communities emerging in a radically different world. Much of the collection was about perfecting existing silhouettes and focusing on Serre’s commitment to upcycling, which, she said, now accounts for fifty percent of her business (other brands, take notes!). The weaving of past, present and future together was there all the time: you could see it in the hourglass shape of a trio of collaged houndstooth coats for any gender; intricately constructed outerwear conjured out of leather and fake fur bedspreads; a passage of looks utilizing white lace trim tablecloths; the jewellery was made from pre-used stuff like vintage rings. Serre’s collection was a powerful celebration of what could come out of today’s state of the world. 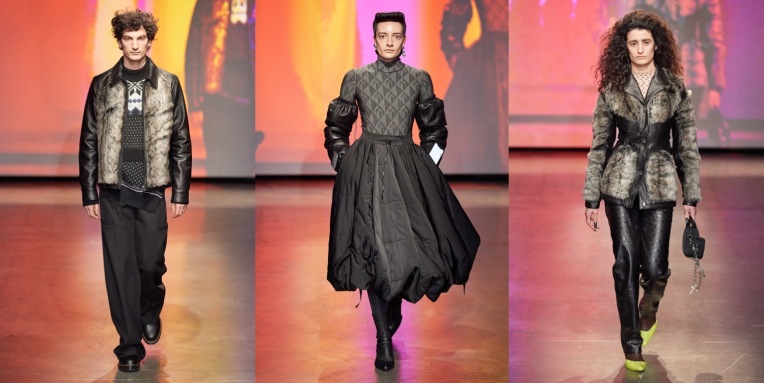 Upcycling the heritage of the craft to make something for the present that is beautifully creative: John Galliano tackled the challenge of our times with his glorious Maison Margiela haute couture collection. For a designer who began his career with a graduation collection about the French Revolution in a time when young people in London were chopping up vintage clothes from markets, this was almost a reclamation of all of Galliano’s first principles, elevated and reenergized amid the 21st-century youth rebellion against waste and overconsumption. Most of the collection was made from materials that already exist: “memories” of bourgeois classics, recut, turned inside out, dissected, collaged, and punched through in a riot of color. Galliano spoke in a house podcast about how he and his studio team had sat and decided “there are too many clothes in the world.” He reflected on the rise of the bourgeoisie and capitalism after the 19th-century Industrial Revolution. Next thing his assistants were out scouring thrift shops for materials to work into the collection. Haute upcycling is not just possible; it can look refined, intriguing, incredible. For instance, bedsheets were repurposed as evening capes, a delicate elegance found in wisps of pink and apricot chiffon draped and taped in place as in a spontaneous Madame Grès–like moment. The attitude of a girl in an emerald 1950s ball gown veiled with a black tulle cape seemed to symbolize it all. Striding forward in an echo of an Old World couture pose, she held one arm elbow out, her yellow-gloved hand in a fist. Cut, mix, create, amaze. 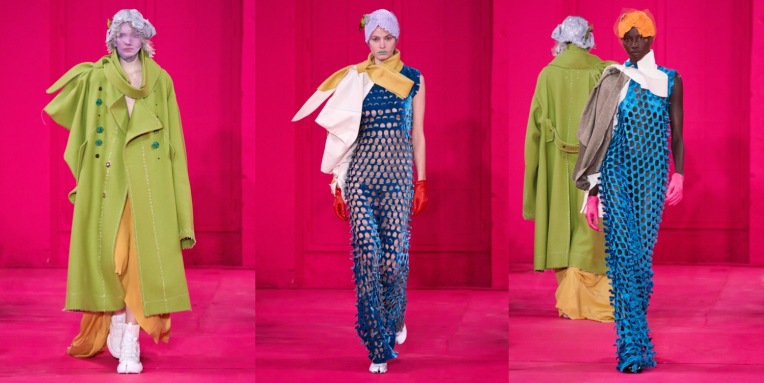 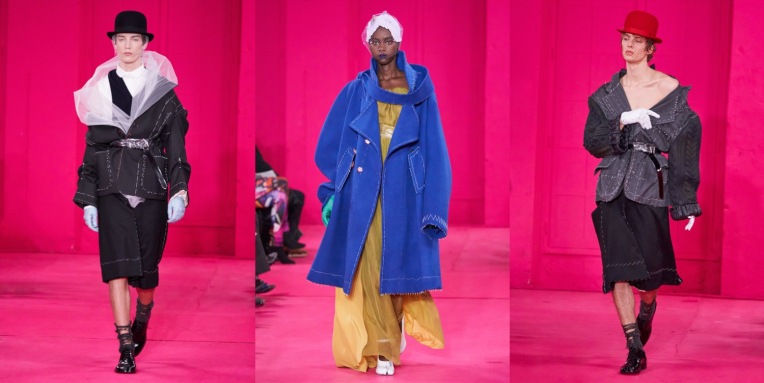 Marine Serre‘s spring-summer 2020 collection, entitled Marée Noire (‘black water’, ‘dark tide’ in French), was unapologetically… Marine Serre. It’s really incredible that Serre, whose label is still relatively young and small as for Parisian standards, has such a distinct, signature look, not even mentioning her already cult moon crest print that is a street style classic. Under today’s grey, Parisian sky and in the misty rain, Marine sent down a fierce line-up of models at all ages, races and genders, some pregnant or with their dogs. This was another post-apocalyptic vision of chic according to Serre, which was much more defined and not so over-styled as last season: utilitarian jumpsuits with buckles, over-sized coats in PVC, hour-glass-shaped blazers and jackets, scuba-diving dresses with up-cycled silk scarf inserts (Marine Serre’s another ground-breaking signature, which is all about sustainability). Some of the models looked angry, while the collection’s main accessory – black rubber gloves – bring on some affiliations (serial killers, for instance?). But there was also light in Marine’s dystopian world (well, ours, if things keep on going the way they do now). A number of looks were all about white crotchet knits, there were even floral prints popping on maxi-skirts. Some girls wore towel turbans on their heads, while few skirts and dresses were actual towels as well, but couture-draped (this might be next season’s trend, just take a look at Prada) Maybe these women just took a bath in the previously mentioned, intoxicated, black water? The designer leaves you wondering, which is a rarity in today’s fashion. This was one of the strongest line-ups coming from Marine, consistent and intriguing. That’s a very good start of Paris fashion week. 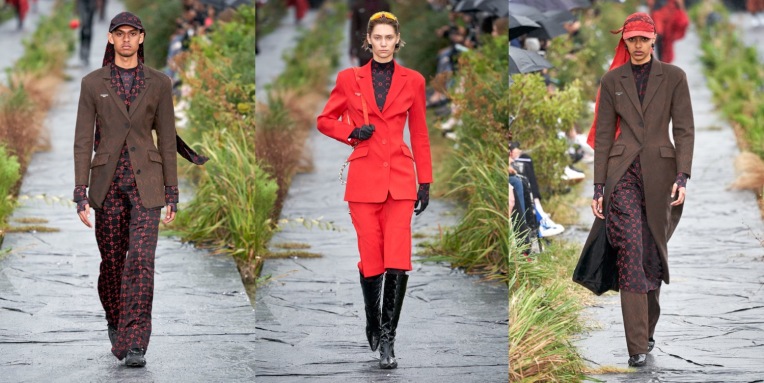 Two weeks after winning the CFDA Award for Emerging Designer of the Year, Emily Adams Bode has another major achievement behind her belt: her first-ever Bode runway show, in Paris, not in New York. That’s a smart move. Men’s New York fashion week has an extremely low visibility, while Bode, a brand that possibly has the brightest, sustainability-forward concept behind it in the entire industry, needs a fair spotlight. The label’s off-kilter pieces reinterpret antique quilts and domestic textiles in a workwear context to create new narratives. Each collection harmonises disparate elements, repairing and preserving materials that would otherwise be lost, thrown away. The designer produces modern heirlooms that nod to folkloric craftsmanship with hand-stitched accents and panelled constructions. For spring-summer 2020, Bode focuses on the same idea, but with a different background. As she explained backstage, ever since launching her menswear label three years ago, she has been waiting for the right moment to present a collection inspired by her familial ties to a bygone wagon workshop based in Cincinnati that produced ornate creations for Barnum & Bailey and the Ringling Brothers. “It’s about being able to tell that narrative of the historical techniques and fabrications and then [figuring out] how we can bring this to market in larger way,” she added. An intricately embroidered coat or a suede jacket with hand-stitched florals might have been the nods to her season’s reference. The clothes that impress with detailing were put together with Bode’s classics – vintage-y, short-sleeved shirts, striped, cropped pants, over-sized overalls. I’m a huge fan of Bode and its philosophy, and it’s not the first time when I’m saying this. Big hopes for winning the LVMH Prize in a couple of days!