The vibrant Eckhaus Latta spring-summer 2023 show took place in one of those lush and beautiful gardens that you can’t believe actually exist in the middle of the city. As models walked out in geometric metallic knit tops that glistened in the sun like tinsel, their faces shiny like doughnuts (turns out it was a peel-off face mask), it was clear the buoyant mood felt before the presentation wasn’t just on account of people running into each other after not seeing them for a while, but it was what Mike Eckhaus and Zoe Latta actually wanted everyone to feel. “I think this season we felt rather optimistic and wanted that to be expressed within the clothing,” Eckhaus said backstage after the show. “I feel like there’s been this general sense of apathy that we, our community, or just our friends have been feeling,” Latta added, picking up the beat immediately. “This is kind of an attempt to be like, ‘It is still chaos. The world still feels a little fucked, but let’s have fun.’” There was joy in Hari Nef’s cream slip dress, adorned with embroidered threads covered in beads that click-clacked this way and that as she walked through the grass. Musician Ethel Cain, wearing a proper ecru cropped bouclé jacket (and matching wrap-around skort) with a “Fear no plague” tattoo right in the middle of her sternum, was cheeky. No, wait, actually cheeky was Jacob Bixenman’s burgundy bubble polo shirt, worn with what looked to be a one-leg pant that exposed exactly half of the model’s buttocks. Silhouettes were slightly oversized and gave the illusion of being askew; attention was paid to the back of the garments as much as the front with image placement, interesting pockets, and other details. “It’s a sense of wanting that fullness,” Eckhaus said. “I feel like we’re so accustomed to images now – the front image – but clothing is 360, and we wanted to have that juxtaposition of what you’re experiencing on the front of the body versus the back, having it feel more rounded or having different types of energy that move back and forth.” Every look appealed to the senses, with textures that were begging to be touched and played with, like cool netting turned into a long dress with a straight neck and ruched detail on the front, or floral-embroidered trousers with what looked to be a built-in skirt on top and tassels running down the sides. “We wanted a lot of tactility in the collection with the textiles that we’re using across the board,” Eckhaus said. “Whether it was how images were placed on clothing, how materials transformed, like in the knotted pieces and the bubble fabrics, but not getting too – as we always joke – ‘project-y,’” he said, laughing, before adding, “But then I feel like, if it does get project-y, whatever. We’ve been doing this for a while, and we feel really confident in the times when we do have those gestures.”

It’s another anniversary this New York Fashion Week: Eckhaus Latta celebrates its first 10 years. It’s not that easy to define this brand in one word – it’s raw and elusive, sexy and gender-fluid, over-sized, and then all of the sudden super clingy and sensual, spontaneous, kind of minimal, but not really noting all the arty handwork the brand loves to add to their collections. When Mike Eckhaus and Zoe Latta arrived in New York in 2012, their label was immediately deemed “crafty” and “indie”. After a decade in business (the irony: many people still consider the brand as “emerging”), Eckhaus Latta is one of New York’s strongest standing independent labels, with two brick-and-mortar stores, an e-commerce business, and admirers from all over the world. Its anniversary show at the former Essex Market affirmed that after a decade of independence, Mike Eckhaus and Zoe Latta are still charting their own course in fashion. The autumn-winter 2022 show was filled with Eckhaus Latta signatures. Sheer, glittery knits were slashed open at the back; minidresses were cut on a square edge; and tailoring was slit to reveal a spine, a thigh, or a breast. Worn by the brand’s friends and collaborators, including David Moses, Hari Nef, Maryam Nassir Zadeh, Thistle Brown, and Paloma Elsesser, the collection was a summation of everything Eckhaus Latta has built. It was cool, unfussy ready-to-wear with undertones of kink, craft, and community. It still is all these things, without ever labeling itself. “We didn’t want to be nostalgic or retrospective,” said Eckhaus postshow. “But we did want to bring back the things that we loved from our early collections, the handwork especially,” added Latta. The chain-mail pieces that closed the show, graphically sliced up to be equal parts erotic and acerbic, were handmade in the brand’s atelier. It was well balanced with the label’s more affordable garments. May Eckhaus Latta’s next 10 years be about furthering the bond between its tender handwork and commercial hits.

What Eckhaus Latta sent out this season was one of their most concise and quintessential collections ever. “It’s about feeling more free,” said Mike Eckhaus and Zoe Latta. “Really feeling yourself, coming out of the past year-and-a-half and wanting to feel sexy and confident and free.” Garments were filmy, thin dust-colored layers of nylon layered together, ivory cotton dresses and bodysuits with oval cutouts and hundreds of snaps, and airy shirts in lime and faux leather jackets in cinnamon left open. Pieces were named after transient, erotic words: vapor turtleneck, undone jumpsuit, wisp dress. The torsos were out, the nipples were out, and in a statement of intent: models wore black thongs instead of the industry-standard beige. This collection felt like a Helmut Lang tribute, even if this wasn’t the intention. Back to the designers – both Latta and Eckhaus had a reckoning with their own bodies this past year; she became a first-time mother, he had a breakup and then the requisite hot boy summer. “We’re going through different things, but we both have a desire to just be fucking real,” said Latta.

Like many people during this period, Zoe Latta and Mike Eckhaus had a mood rollercoaster. As the duo explained on a Zoom call with Vogue that bummed-out vibe provided a creative spark, suggesting that their focus ought to be on comforting shapes and textures and a somber palette. The Eckhaus Latta duo went on to report that, thankfully, they are feeling more optimistic now – and that they are eager to get back to fashion business as usual, with live events and people around, but in the meantime, like the rest of us, they’re making do. Perhaps accidentally, it’s that sentiment that served as the red thread through their autumn-winter 2021 outing. The most arresting idea the designers explored this time out was the deconstruction of familiar silhouettes in ways that created artful voids in the clothes or that made them adaptable into different forms. It was a poetic expression of our current state, a year into the pandemic. Eckhaus and Latta also played with optical patterns, like trippy rib knits and a black-and-white jacquard, and with ways of giving a sense of hand to synthetic fabrics. The collection was small, but thorough; every look was wholly considered, from form to detail. Perhaps the collection’s most admirable quality, though, was its grit – though we often look to fashion for fantasies of the future, that kind of grounded approach is necessary. This Eckhaus Latta line-up not only captured the general mood, but somehow it made it look… cool. 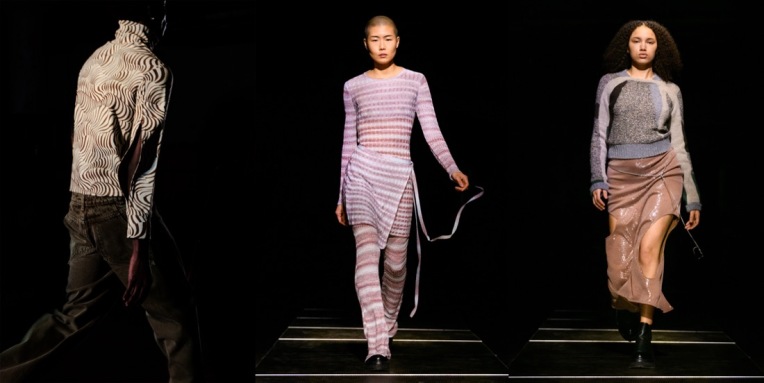 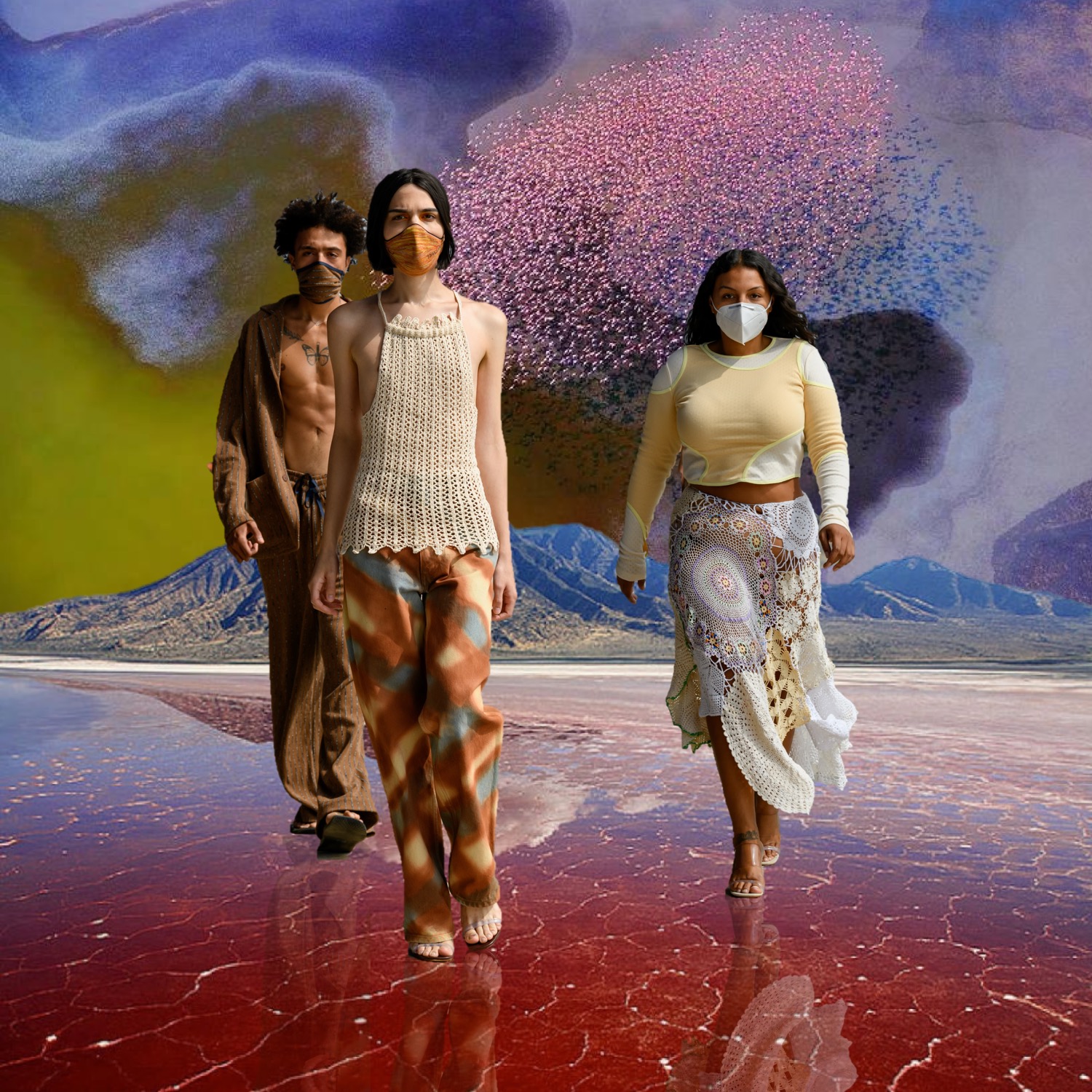 I loved Eckhaus Latta‘s spring-summer 2021 collection for its honesty and rawness. Walking became, thanks to COVID, pretty much everyone’s primary outdoor activity these days. As a parallel to that, the show celebrated this fact. It was staged outdoors, underneath a section of New York’s FDR Drive where a long, straight jogging path provided a runway, and with a bare minimum of fuss: hair au naturel, model-applied makeup, no soundtrack, just an abbreviated collection and the train rumbling by now and then. “We wanted it to feel, like, no spectacle,” Mike Eckhaus explained after the show. “Like the models could just be going out for a walk with their friends.” The clothes matched that easygoing manner. There were stylish sweats, of course, but also baggy jeans and knit suiting and gingham tops with the airiness of wind-borne kites. The most fitted looks were knit and the most tailored were done of featherweight nylon, the material often patchworked together in tonal color blocks. These were casual items, but every garment seemed to have been hand-worked, and that gave this collection a bit of emotional undertow; in a socially distanced era, it felt as though Eckhaus and Zoe Latta were communicating touch through their clothes. That was true of the collection’s ornate crochets, but it was also true of the hand-dyed jeans and the burnout florals. Smart, authentic, durable clothes for the new reality.