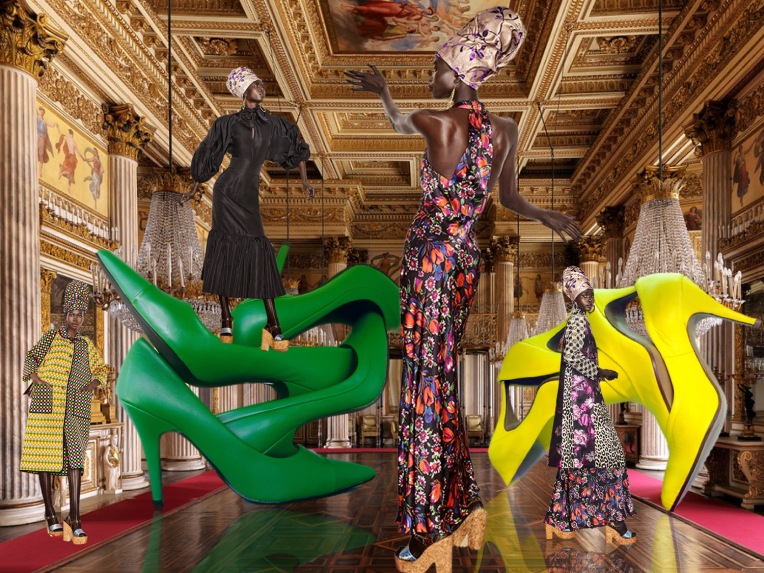 In support for the Black community, I continue celebrating and highlighting the talented individuals that shape fashion today. Take notes! Duro Olowu‘s bold fashion needs no introduction. Born in Lagos to a Nigerian father and Jamaican mother, Duro Olowu spent his childhood travelling between Nigeria and Europe. From an early age, his enthusiasm for fashion was inspired by the unexpected mix of fabrics, textures and draping techniques of the clothing worn by the women that surrounded him. The designer started his eponymous label at the end of 2004, and up to now he’s one of London’s favourite designers with a loyal, art-world-focused clientele (in a way, similar to Mona Kowalska’s now-closed cult A Détacher in New York). Alluring silhouettes, sharp tailoring, original prints juxtaposed with luxurious vintage fabrics in “off beat” yet harmonious combinations are Olowu’s signature. For spring-summer 2020 he drew on the work of Françoise Gilot, who is perhaps most famous for being Picasso’s romantic partner, though the 97-year-old French painter, art critic, and author is a creative force in her own right. Olowu came across a recently reissued collection of her travel sketches, and her colorful impressions of India, Senegal, and Italy from the late 1970s and early ’80s informed his new collection. One particularly eye-catching coat in that series was spliced with panels of pale pink made from vintage interior fabric that Olowu came across on a trip to Lille, in northern France. It was upcycling done with a sophisticated hand. Then, if you look at Olowu’s autumn-winter 2019 line-up, “cosmopolitan”, “chic” and “Afrique” were the three words that the designer used to describe the spirit the collection, which was inspired by Miriam Makeba, the fearless South African singer and civil rights activist. Makeba, who was known as Mama Africa to her fans, possessed a wardrobe that was purpose-built as a celebration of African pride at a time when her country was in the grip of apartheid. You could see her influence right off the bat, in a graphic knit coat with patch pockets and detachable snood (Makeba was rarely seen without a towering head wrap or hat). That motif was repeated to flattering effect on an A-line maxi dress that could have been pulled from her closet. The world of Olowu is eclectic and rich, and each collection tells a unique story. Induldge yourself in his idiosyncratic, feminine and timeless work by browsing his previous collections on his site. And if you’re in London, visit his boutique on 14 Masons Yard! 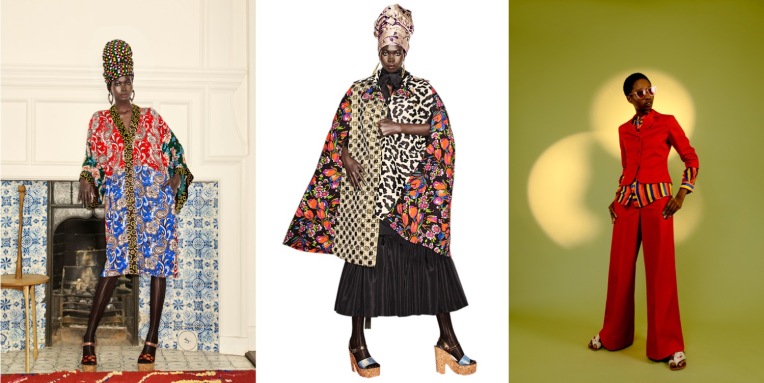 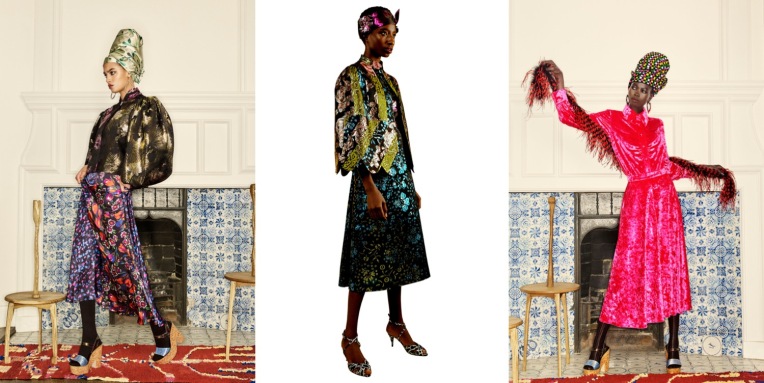 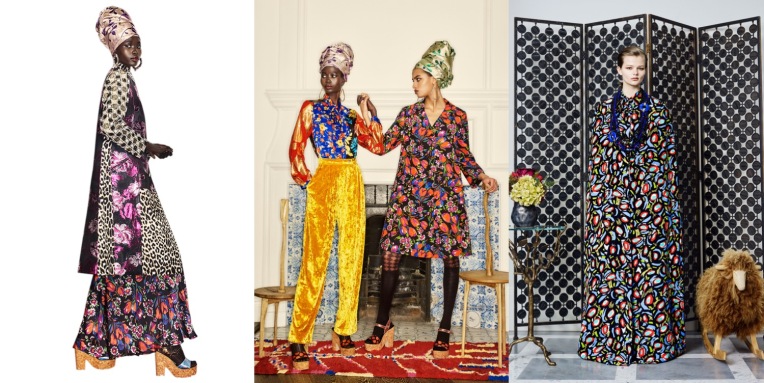 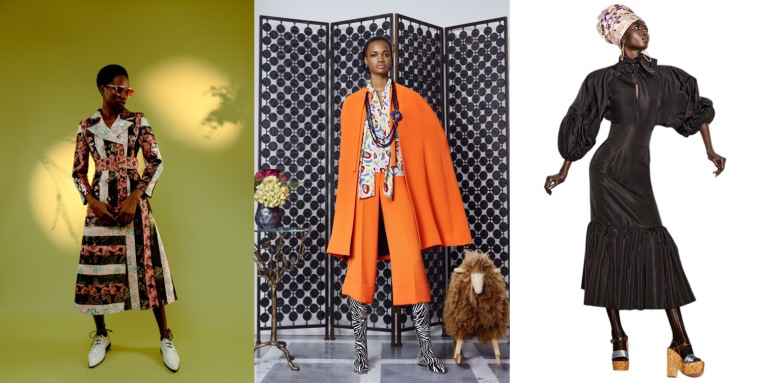 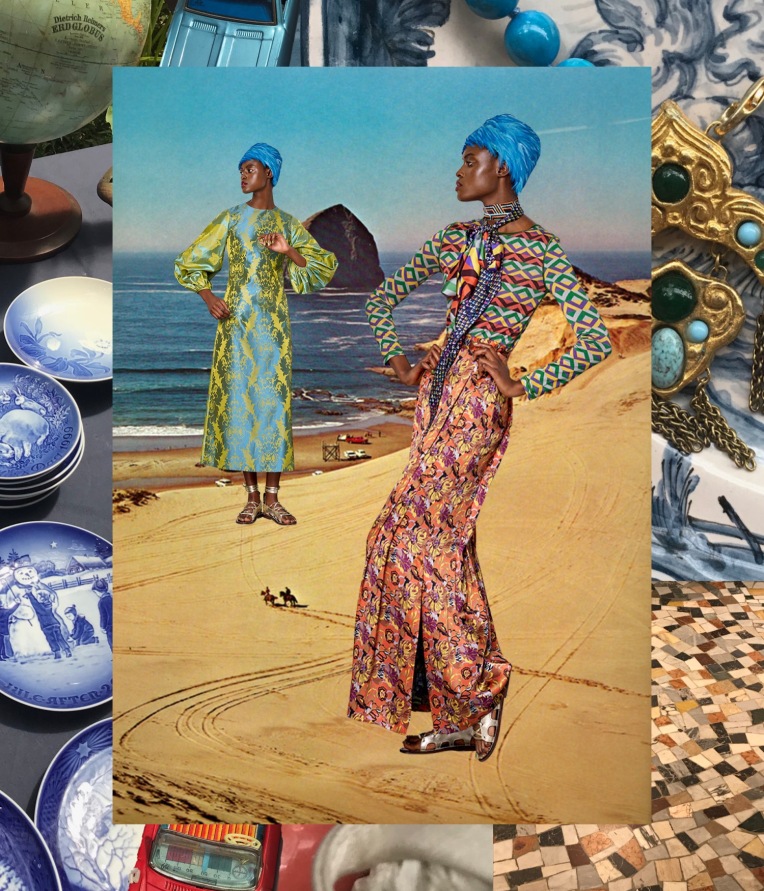 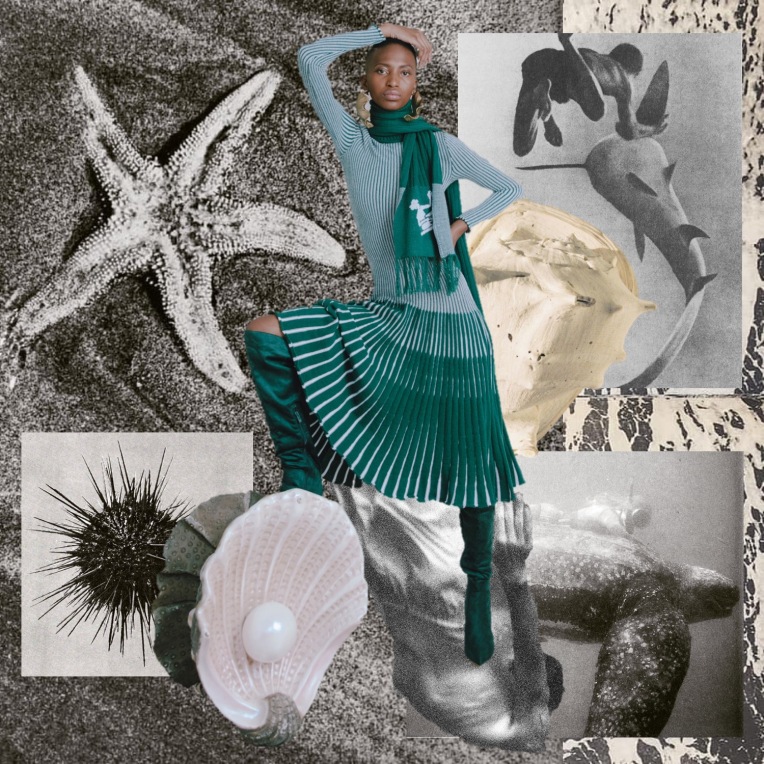 In support for the Black community, I continue celebrating and highlighting the talented individuals that shape fashion today. Take notes! Thebe Magugu staged his debut presentation at Paris fashion week after scooping the prestigious LVMH prize last autumn. The first African designer to win in the competition’s seven-year history, Magugu paid homage to his homeland with a photo exhibition entitled Ipopeng Ext, after an area in Kimberley, South Africa, the city in which he grew up. Fittingly, the name itself translates as “to beautify oneself.” Elegant and evocative portraits of Magugu’s local community lined the walls of the museum; they had been captured by two of the continent’s most celebrated young image makers: South African photographer Kristin-Lee Moolman and Sierra Leone–born stylist Ib Kamara. “These people and places were my earliest references,” said Magugu gesturing to a picture of his cousin Smangaliso posing in his neighborhood church wearing a fluffy light blue sweaterdress. Exquisite reminders of Magugu’s childhood were threaded throughout the collection, including a photoprint of his aunt’s iron roof that was abstracted to look like distressed denim on a marabou-feather-trimmed button-down with matching pants. Inspired by a retro tablecloth, the carnation-print trench coat had a characterful charm that was just as striking. Magugu’s uncle Nephtaly was pictured on a motorcycle dressed in a collared shirt that was covered in an illustration of two black women consoling each other by the Johannesburg-based artist Phathu Nembilwi. Beyond telling a very personal story, Magugu’s clothes are often a form of social commentary, particularly as it pertains to women’s rights in South Africa. As the designer explained, the print was a subtle political statement on the country’s rising femicide rate. Perhaps equally radical is Magugu’s unwavering commitment to producing in South Africa. The new logo satchel was handcrafted by artisans in Johannesburg, while his latest knitwear offerings were all made in Cape Town. Magugu is poised to export his special made-in-Africa vision across the globe. 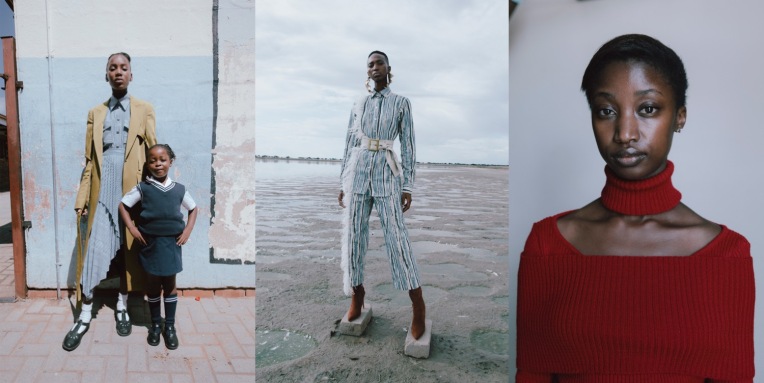 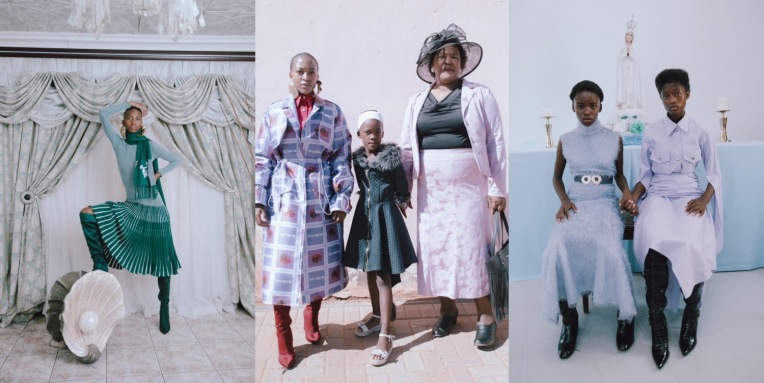 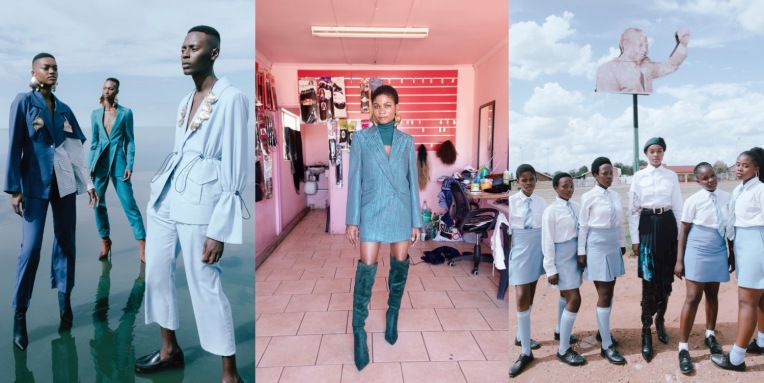 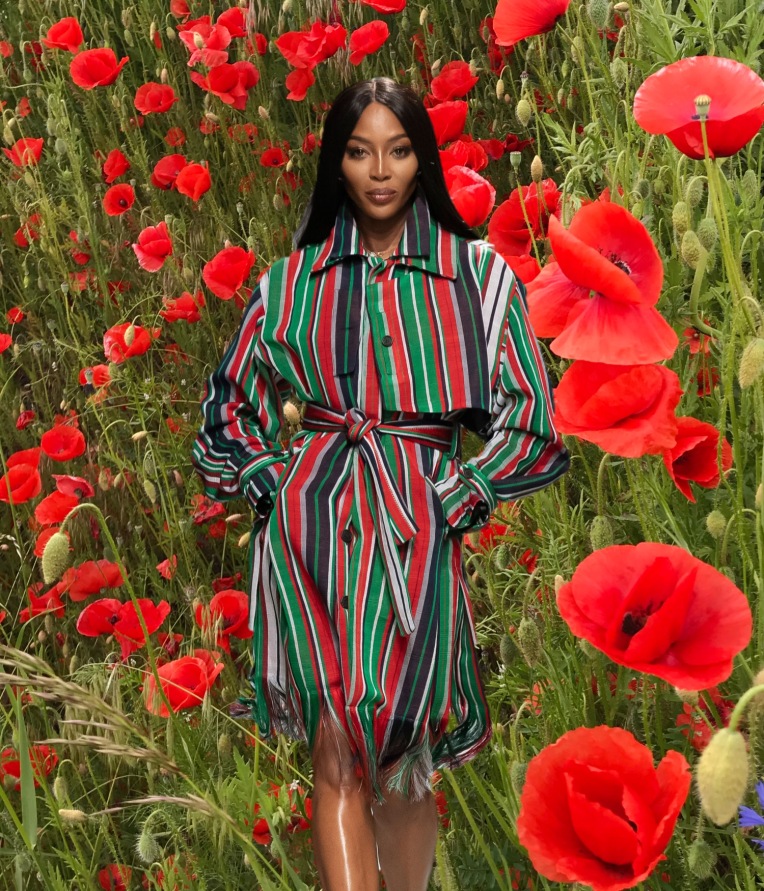 In support for the Black community, I continue celebrating and highlighting the talented individuals that shape fashion today. Take notes! Kenneth Ize made his official debut at Paris fashion week this season, though his eponymous label has been making waves on the international circuit for the past few seasons. The Austrian-Nigerian designer was an LVMH prize finalist this past September, having first caught the world’s attention at Lagos Fashion Week a few months earlier. Images of Naomi Campbell and Imaan Hammam striding down Ize’s runway in his signature handwoven checks, a traditional Nigerian fabric known as asoke, caused a global social media frenzy within minutes. Both super-models were present at his autumn-winter 2020 show – Hammam opened, while Campbell closed what was a truly impressive first outing for Ize. The designer is best known for his men’s tailoring, though he kicked things off on a distinctly feminine note with a quilted striped miniskirt and matching funnel-neck zippered jacket. Ize is also inspired by workwear – think carpenter pants spun from silk and fringed at the hem. Adwoa Aboah looked especially striking in one of his quilted boilersuits. Ize has been working with a small circle of asoke weavers in Nigeria with the hopes of preserving the centuries-old craft from the brink of extinction. For autumn-winter 2020, he expanded on that commitment to local artisanship by collaborating with Austrian lace-makers in Vienna where he was born and raised. The green and orange lace tunics and suiting were a nod to Ize’s mother, who, like many West African women, would source Viennese lace to make custom outfits for special occasions. The collection was largely inspired by her meticulous approach to Sunday best in particular; the devil was in the details here, with matching fringed bucket bags and clutches made in collaboration with Austrian accessories label Sagan. It’s exquisite transcultural fashion experiments like these that will make Ize’s brand stand out in the fashion crowd. Discover more of Kenneth’s work here! 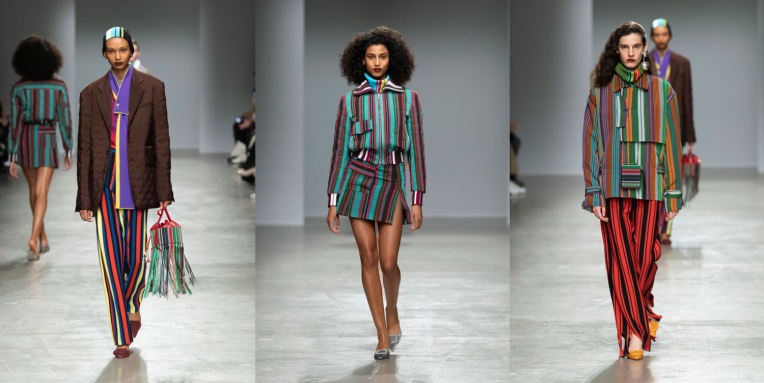 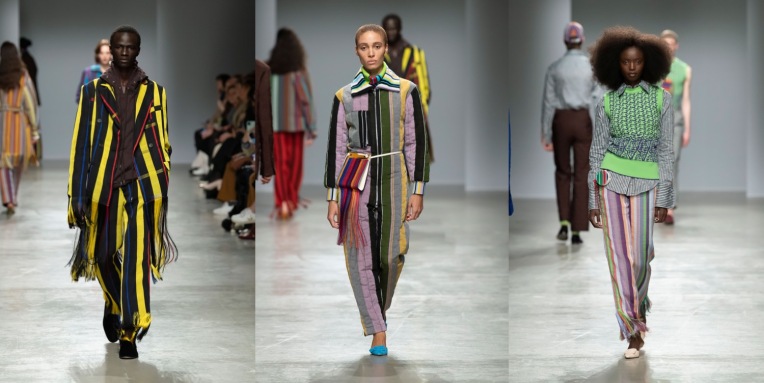 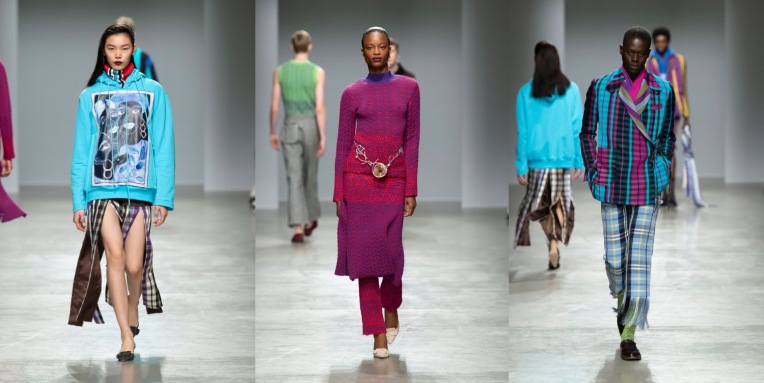 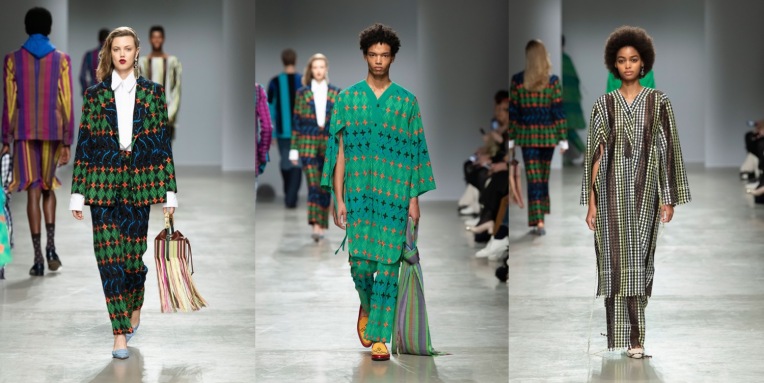 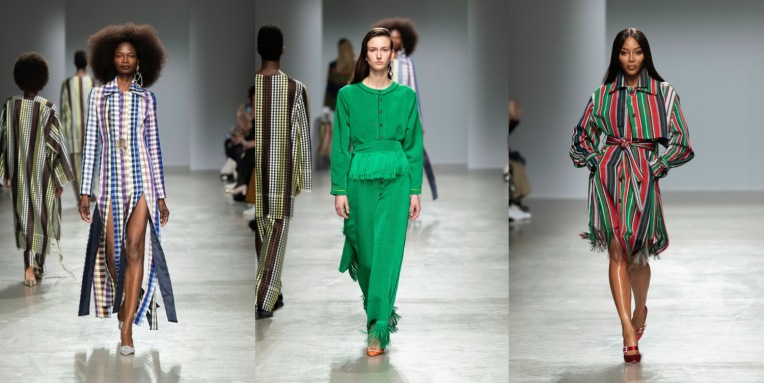 In support for the Black community, I continue celebrating and highlighting the talented individuals that shape fashion today. Take notes! Haitian-born, New York-based designer Victor Glemaud launched his eponymous leisurewear collection of statement knitwear, designed for all people, genders, races, sizes and personalities, marrying comfort and style, in 2006. The designer was a finalist in the 2017 CFDA/Vogue Fashion Fund and honored for his achievements by the Ambassador of Haiti to the United States. For his recent collection – autumn-winter 2020 – Victor used three materials: merino wool, cotton cashmere, and a merino-cotton-ramie blend. Glemaud’s unparalleled sense of color makes his knitted garments even more compelling. A lavender-tomato back-to-front knit set is a highlight. Within his ringer midi dresses and pooling flares are a variety of stitched details that amplify the power of his clothes. His coats, actually fully knit, have the weigh and potency of felted wool. But the best thing Glemaud did on his runway (his first) was show his clothing on a glamorous cast of people of all types. As his turban-clad models – an homage to both his friend Camilla Staerk and the women he grew up with – sauntered around a lounge in the SoHo Grand hotel, audience members could be heard whispering, picking out a must-have pant or bolero sweater. That kind of inclusivity translates to real customers who will be delighted at the prospect of wearing a square-neck minidress with Nike sneakers. Looking back at his previous collections, the autumn-winter 2019 look-book starring Indya Moore, the incredible trans actress from Pose, makes you dream of all the tangerine knits. Pre-fall 2020 has seen Glemaud leaning into his grooviest, hip-swiveling impulses, filled with gorgeous crochet dresses, tunics, and flares. Discover Glemaud’s universe here. 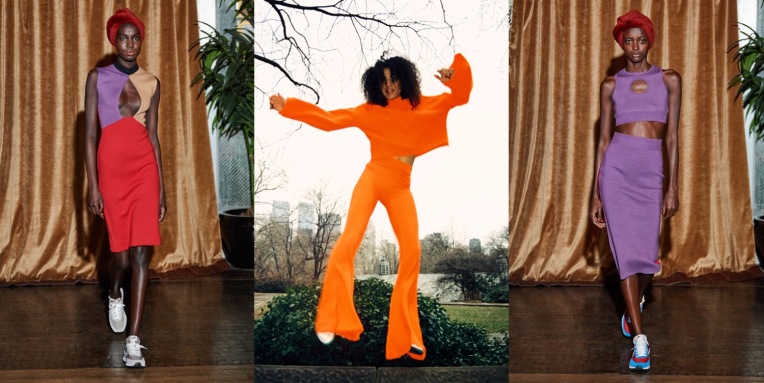 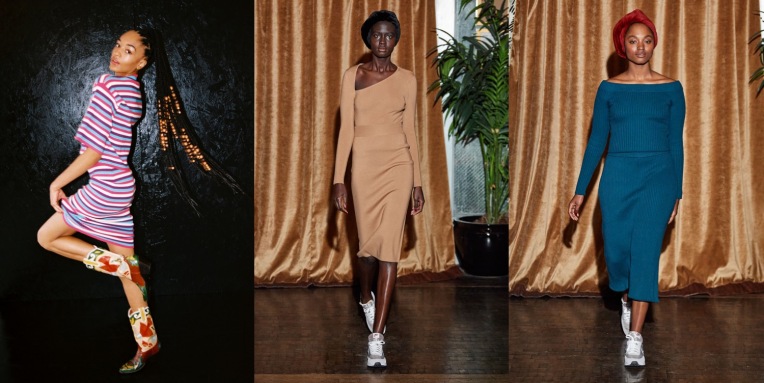 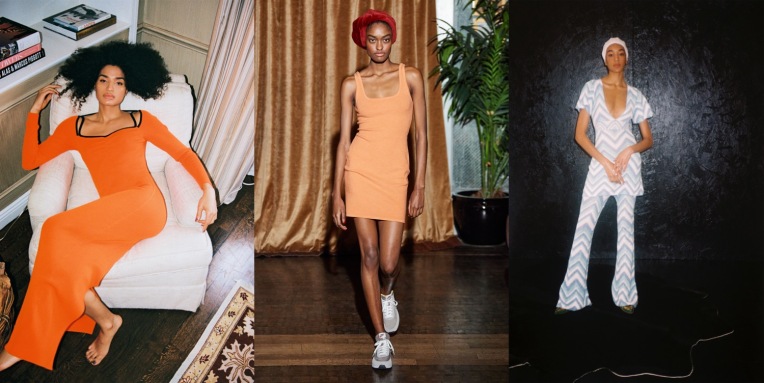 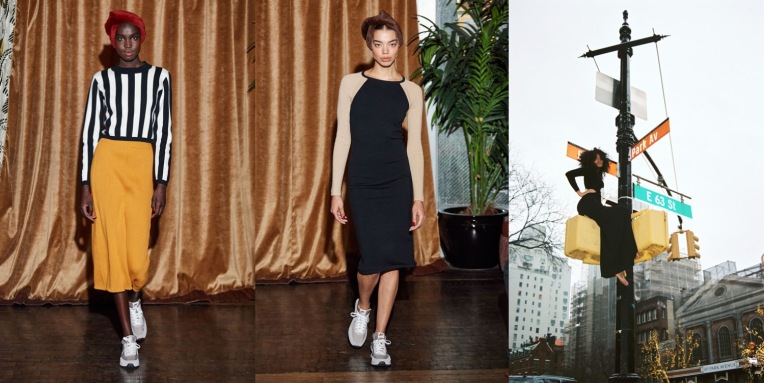 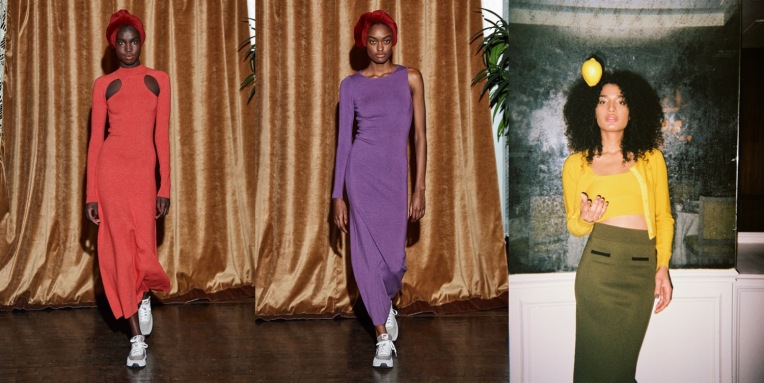 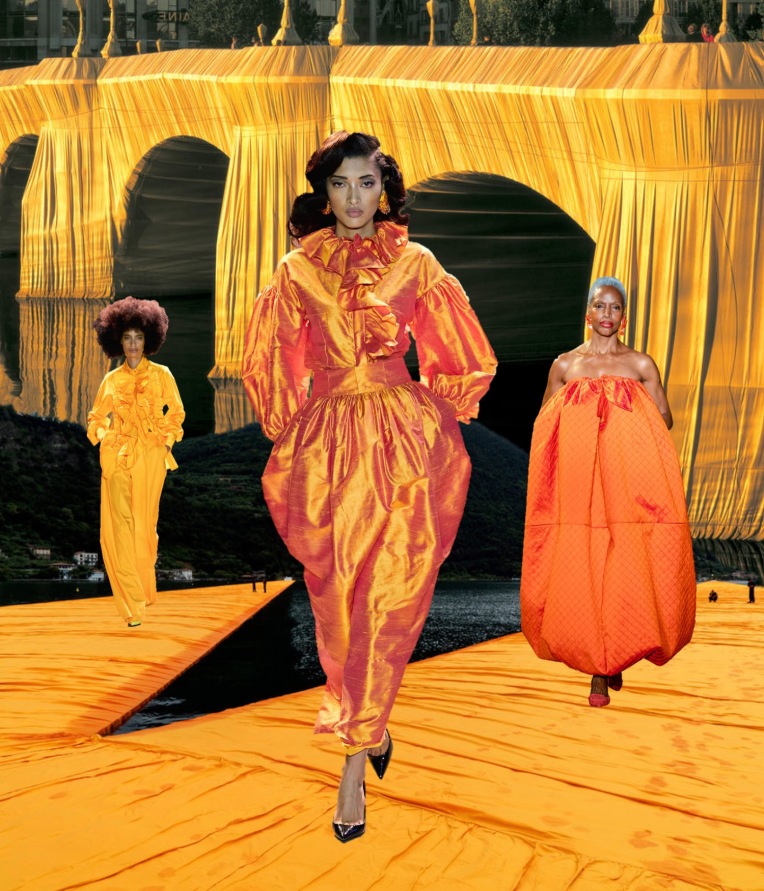 In support for the Black community, I continue celebrating and highlighting the talented individuals that shape fashion today. Take notes! Christopher John Rogers is definitely one of New York’s brightest stars among young and independent designers. Baton Rouge–born, Brooklyn-based designer is known for resurrecting glamour, and his whimsical take on eveningwear (think cascading tulle, slimming taffeta suits, pleated skirts) that got Rihanna, Michelle Obama, Lizzo, Cardi B, SZA and Tracee Ellis Ross obsessed and take it to the red carpet. Moreover, Chistopher became one of the 2019 CFDA/Vogue Fashion Fund finalists – this only motivated him to buckle down further. His autumn-winter 2020 is the perfect balance between dramatic gowns and statement pieces that you will love in your day-to-day wardrobe. Spanning a full 40 looks, Rogers’s show had his signature silhouettes – there was the bulbous strawberry-shaped waist, which reappeared on the runway in violet, and he worked in some past references, like Pierrots, the French cinematic clowns that informed last season’s ruffled necklines. As for new inspirations, he cited trash bags, of all things – he told Vogue that a curtain brushing the floor in a Renaissance painting has the same energy as a crumpled garbage bag – and mid-century couturier Madame Grès, whose later work skewed more graphic and progressive than the goddess-draped gowns that made her famous. But what really makes the collection stand out is the masterful combination of bold colours and gorgeous fabrics. Whereas before Rogers had to be resourceful with his textiles, often working with deadstock materials, now he’s able to make patterns and sumptuous fabrics factory-made for his brand. “All of the things that my team and I have been dreaming up, we were able to execute on a level that you haven’t seen from us before,” Rogers summed up. The label is now producing on a larger scale thanks to a purchase from Net-a-Porter. In thinking about the potential commercial nature of his work, Rogers cited the popularity of that strawberry silhouette. “For something that morphs the shape so much, which maybe historically hasn’t been seen as flattering, women from a size 0 to a 14 have ordered the dress,” he said. “It goes to show that it’s not about dressing for the world—it’s about dressing for yourself. We’re not out here making 2,000 units of anything. We’re trying to make a few things for the few people who love it, and really make things that will last.” I can’t wait to see what this designer has in store for the upcoming seasons, looking forward to more of his fantastic splendor! 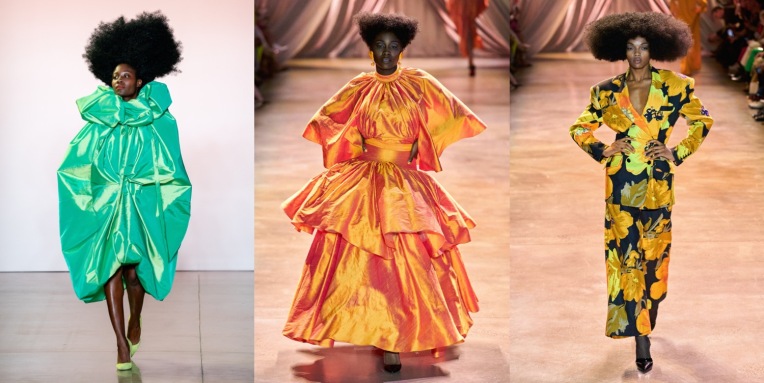 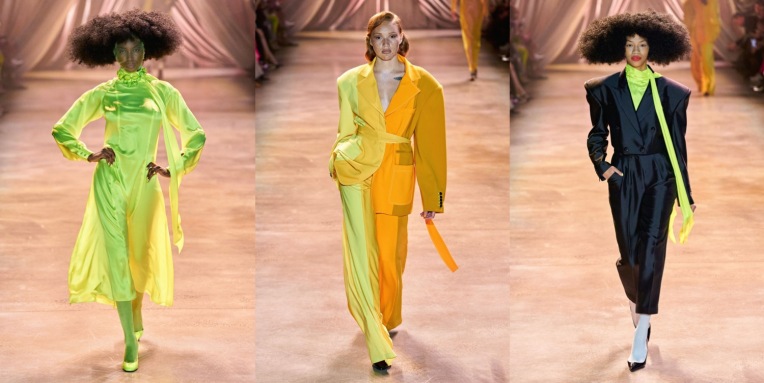 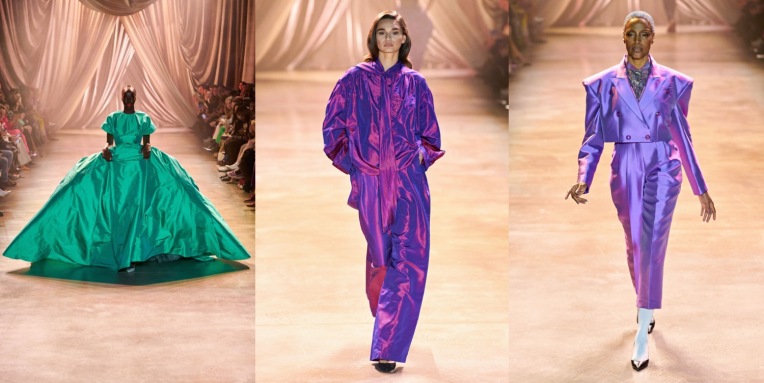 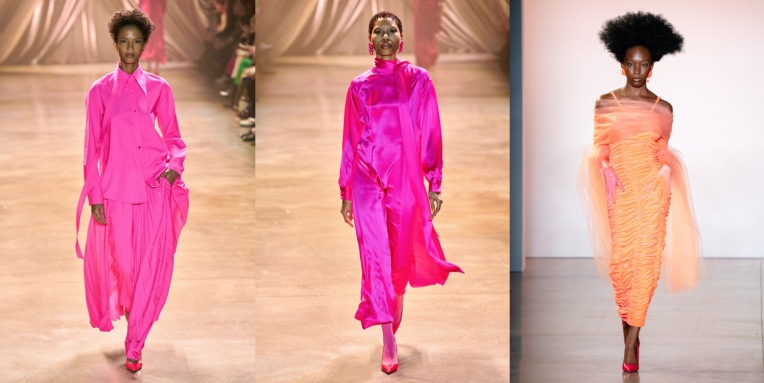 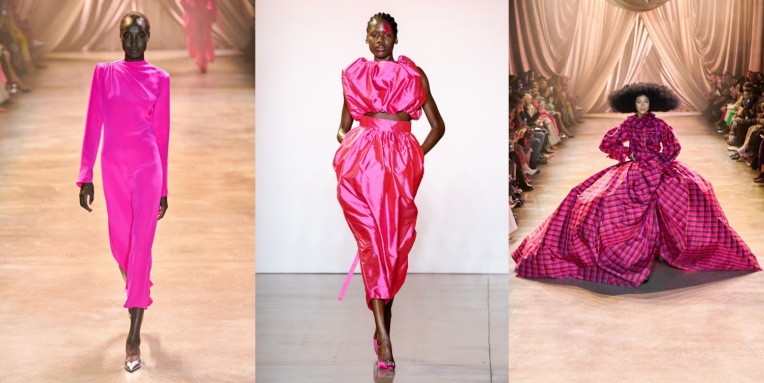