“For this collection, black is expressed through shadows,” said Kei Ninomiya in his spring-summer 2022 notes. “I wanted to express the ephemeral strength and beauty of things that are present around us although we cannot see them clearly.” The show was held in Aoyama, Tokyo, at the Commes des Garçons headquarters. Ninomiya has experimented with non-Noir color previously, most often via brilliant botanical worn installations that were absent today. Instead he expressed his notion of black’s shadow by creating a series of pieces in beige. The idea of something casting a paler shadow than itself implied a reversed polarity of some kind, and the paler procession of pieces did indeed mostly cover the still-breathtaking territory we have seen Ninomiya explore before. Sometimes, as in Look 15, they also looked to break new-for-Noir ground. Two more novelties were the use of woven hemp in rope-adjacent, wearable structures and the first written branding, beyond the garment label itself. The name of the brand was used to make rough white-on-black stripes and checks, which was fine enough on pants, shirts, and cycling shorts. When applied to a more sculptural piece, however, such as Look 9, this branding felt pretty extraneous. Noir Kei Ninomiya is a brand that doesn’t need logomania – those stunning, mushroom-y garments do the talking.

So we came to this moment in fashion, when menswear’s pre-collections are as important as women’s. Or, as in case of Kim Jones’s latest line-up for Dior Men, even more significant (sorry, Maria Grazian Chiuri). It’s just his second season at Dior’s menswear line, but Jones isn’t afraid to take big steps to catch everybody’s attention. Well, and there are major reasons why Dior Men is so appealing lately – just see your Instagram feed that is still buzzing with the designer’s Tokyo extravaganza. The new collection reinterpreted Christian Dior’s love for Japanese culture through multiple lenses, including cherry blossom prints (thought no one would make them look THIS fresh) and two kimono-inspired looks, made in leather. But Kim smoothly avoided Japan-related clichés, by focusing on today’s Japanese way of dressing – and the beloved, futurist aesthetic. Best prove of the latter: Japanese artist Hajime Sorayama created a 39-foot fembot sculpture for the runway’s set; a similar silver robot appeared as a print in the collection. Utility and workwear were represented via metallic harnesses with Dior’s signature chair caning at the back and robot-inspired jewellery. Very cosmic. But what’s most impressive about Jones’s work at Dior – which he already demonstrated last season – is the way he combines menswear easiness with couture level craftsmanship. A white astrakhan bomber that shaded into a toile de Jouy is something elegant, yet wearable, and surely with a out-of-this-world price tag. The more conservative, business-kind of Dior Men client will choose tailoring and (possibly) several of those asymmetrical suits. While some designers (well, I specifically think about the two that landed in every industry news headline last week) fail to understand and respect other cultures than theirs, Valentino’s Pierpaolo Piccioli doesn’t have that problem. His pre-fall 2018 collection for both, women and men, was presented in Tokyo a few days ago and it was far, far away from getting trapped in stereotypical thinking. The first dozen of looks was a punch of red: parkas, furs, florals, duvet jackets, sheer frocks, shirts, loosely fitted pants, everything in red. The next 30 or 40 looks were mostly black or white, with a few pastel exceptions. The closing looks – made for the red carpet – were all about red, again. But we’re speaking of Valentino red, which is a deep and absorbing shade. Lots and lots of tulle and silk was used for each of these evening gowns. And they did look exquisite, couture-level. Shortly, it seemed to be a regular Valentino collection that could be equally presented in Paris, New York or Rome. That was Piccioli’s goal: to show that today’s Valentino is an international brand, suited for women and men from very different destinations. Still, there were some Japan-related hints behind the collection. They were subtle and well-balanced. Piccioli is drawn to the Japanese art of kintsugi, of repairing the cracks of broken porcelain with a molten gold effect that adds new layers of beauty, “so the most broken pieces become the most precious—the opposite to Western culture. Time adds something to beauty.” Did he mean the ever-changing codes of Valentino? Or maybe that was a light metaphor for the art of autumn layering the designer mastered so well this season? Pierpaolo was also moved by this one aspect of Japanese culture that is extremely alive especially today – specifically “the symbolic act of dressing up. People in the street dress like a ceremony, like a ritual”. Other than Moncler, the designer did two more special collaborations this season – both with Japanese visionaries of their own crafts. Renaissance art appeared in the purses produced in collaboration with Undercover’s Jun Takahashi, which will only be sold in Valentino’s Tokyo flagship store. The playfully surreal self-portraiture of the 21-year-old artist Izumi Miyazaki appeared on loose dresses and parkas – it certainly brought more vigour to the line-up. It’s not the first time when I say this: Valentino blooms with Pierpaolo in charge of it. 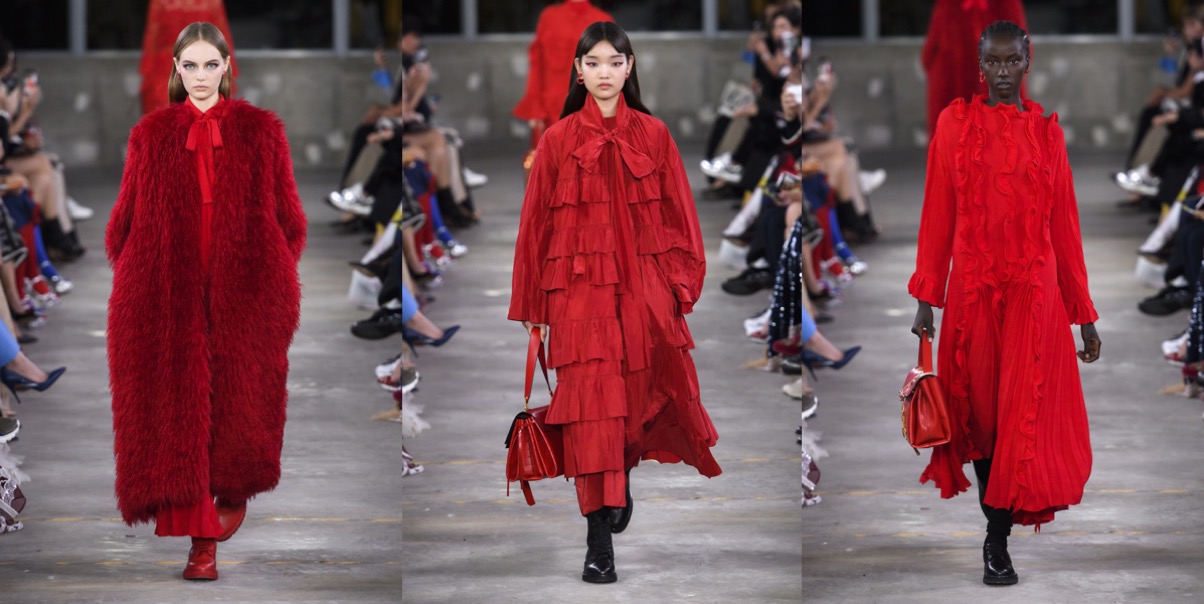 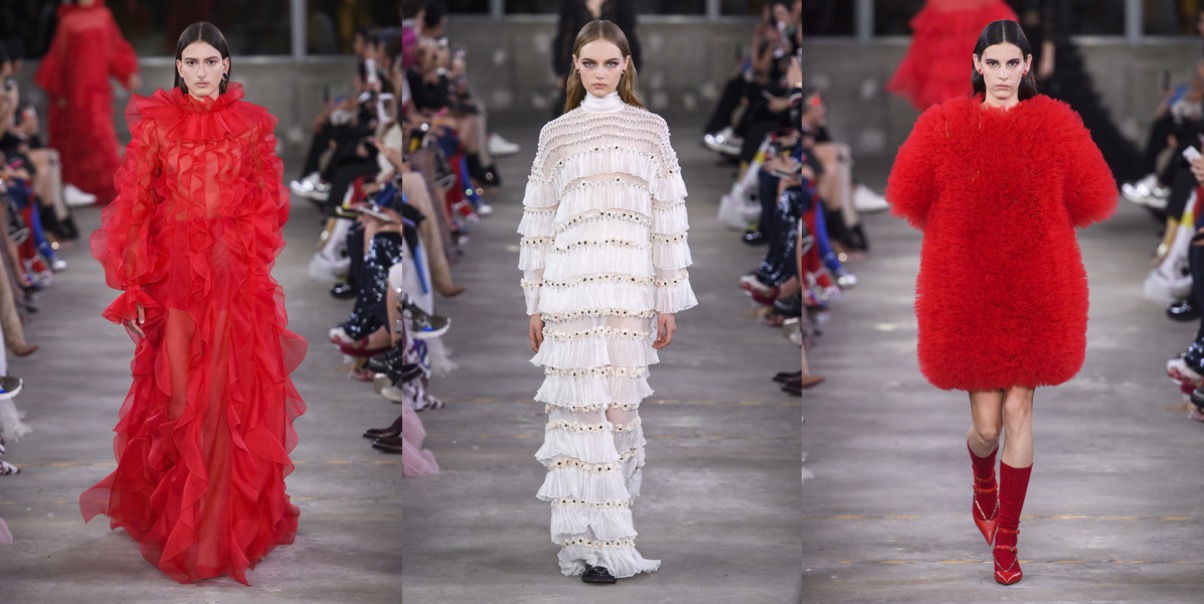 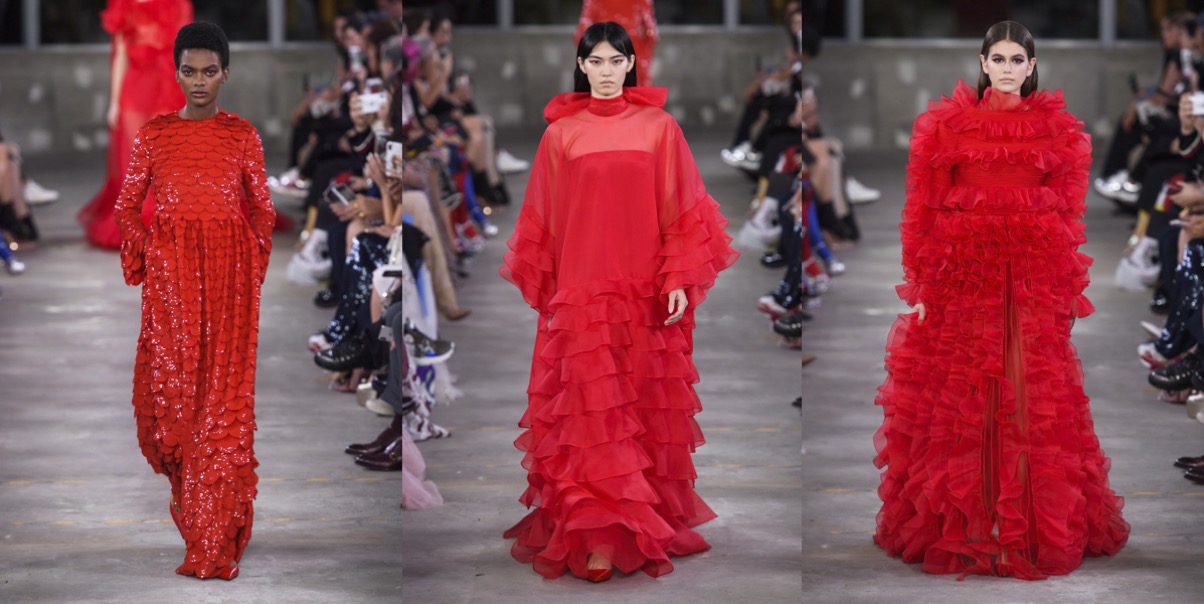 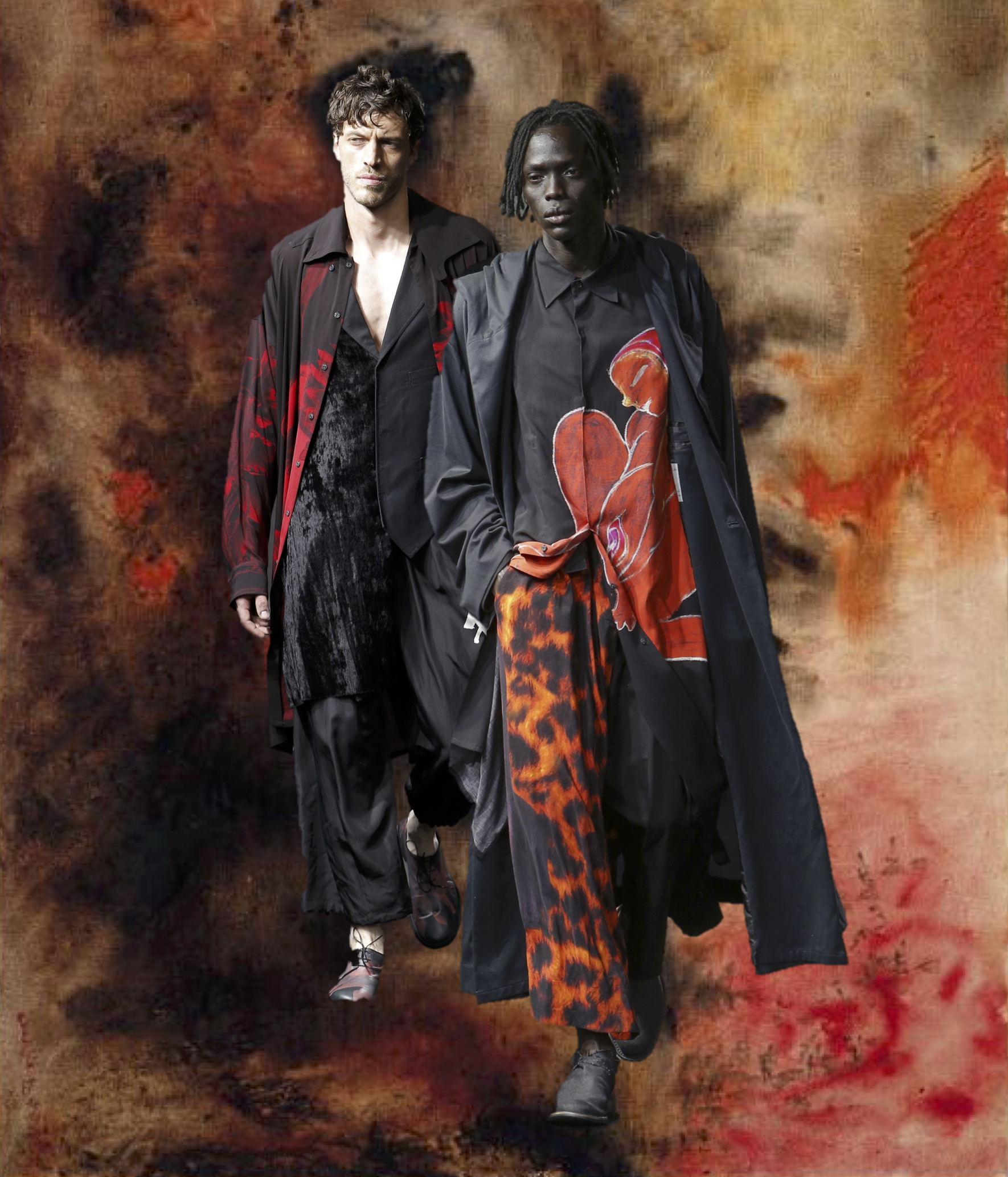 What a collection! I always have a soft spot for Yohji Yamamoto, but his spring-summer 2019 collection is exceptional. And, in a way, very sensual. “I wanted to explain that fashion became so boring.” Yes, Yohji, some who as well feel exhausted with those ‘must-have’ sneakers that are all over the industry can come to the same conclusion. “Essentially, I feel that ordinary people and fashionable people are all tired of fashion because there’s nothing kind of strong, cute, sexy.” Maybe I wouldn’t call his latest line-up ‘cute’, but the two other terms describe the collection precisely. From flowing, all-black looks, Yamamoto’s sensual style poetry progressed into more erotic fields. Some of the robe-coats were covered with depictions of women in various states of pleasure. The designer summed up them as “modern ukiyo-e,” a famous genre of Japanese art. Loose pants and tank-tops/man-dresses came in sultry leopard and flames prints as well. Yamamoto releases his wilder side this season, but not directly; there’s just a notion that can be grasped when you actually wear these garments. 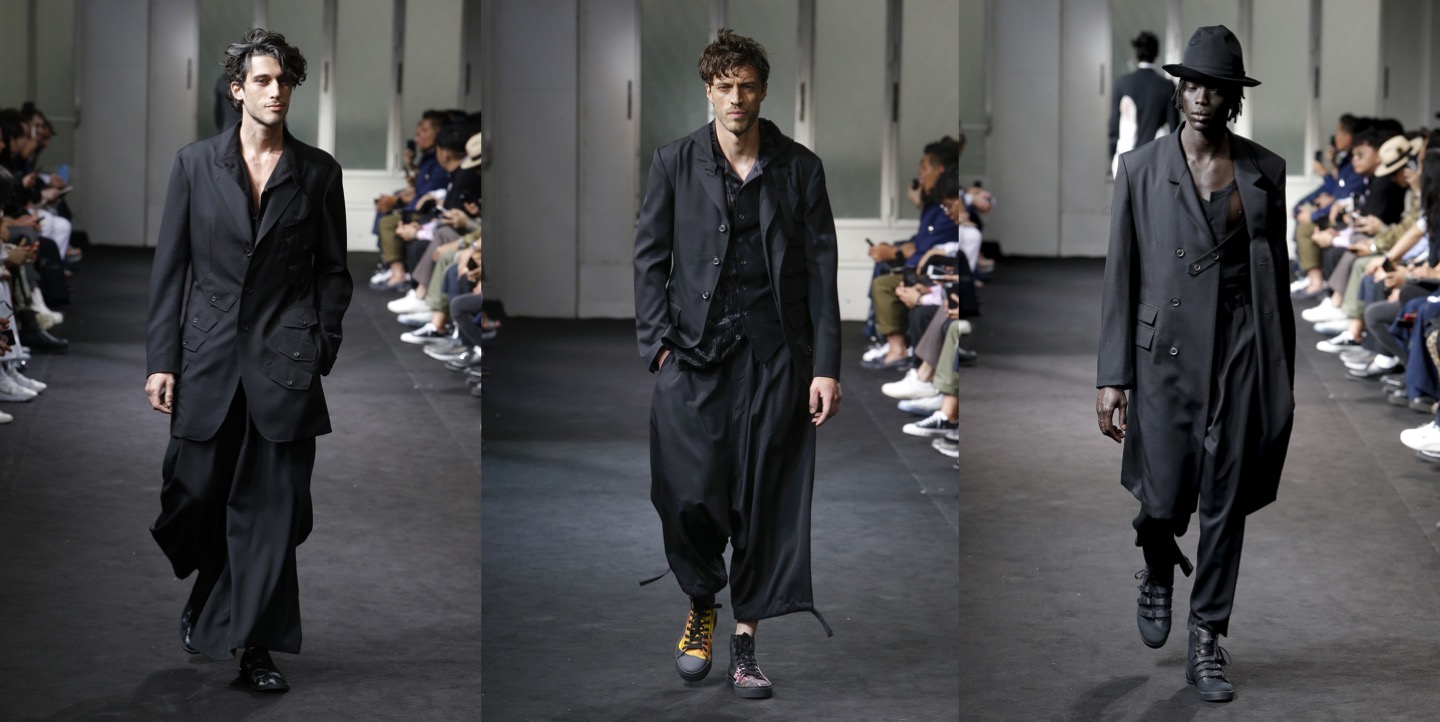 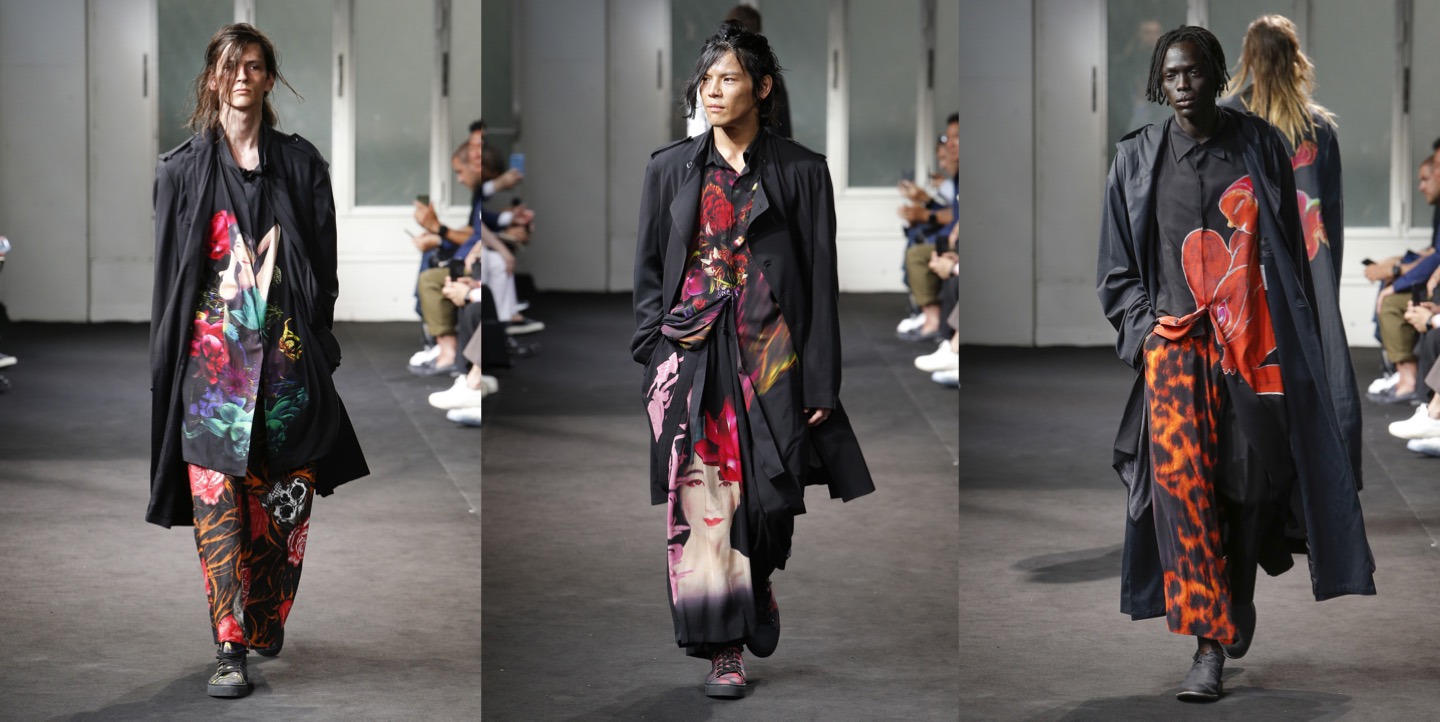 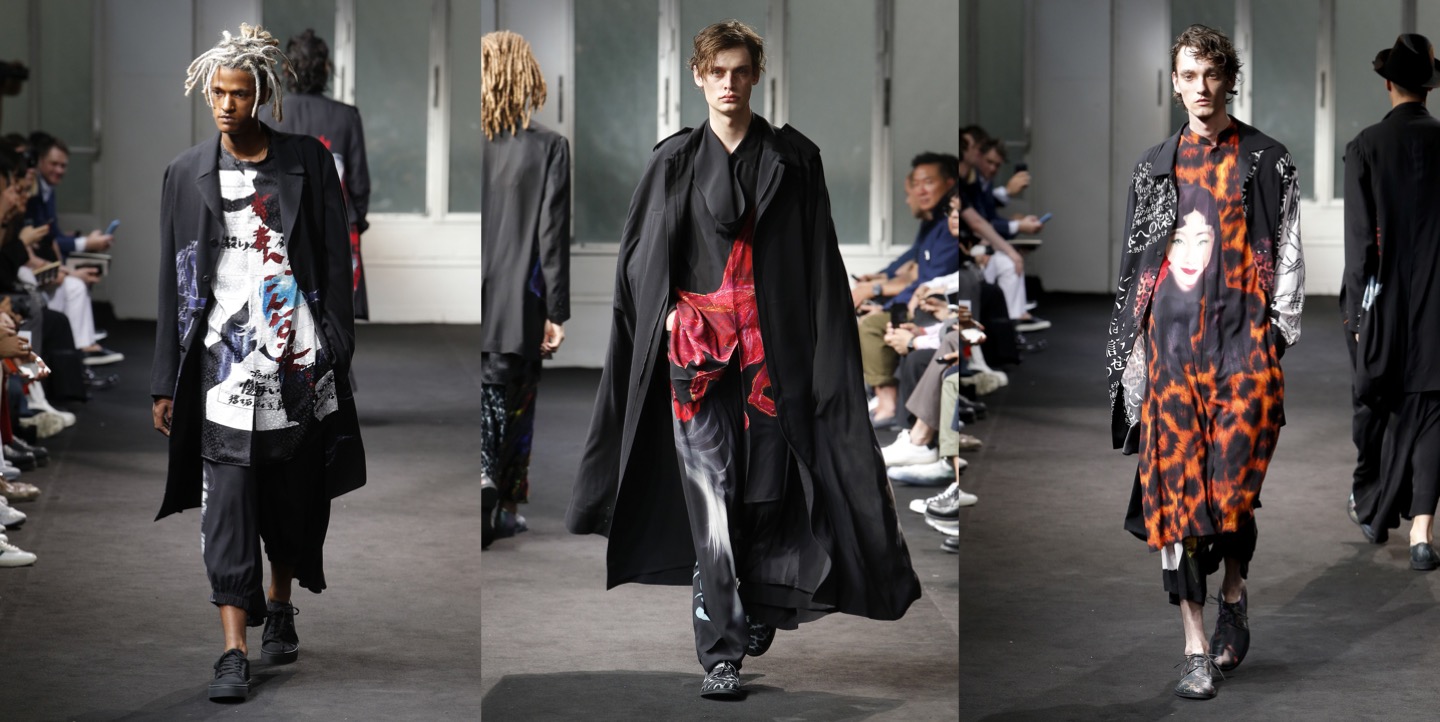 This is what you call a show. Chanel did a faux Ancient Greece venue at Parisian Grand Palais; Prada took us to Galleria Vittorio Emmanuelle’s attic; Dior had its guests see the show in the middle of a Californian canyon. But Nicolas Ghesquiere, and his team at Louis Vuitton, outdid himself. Again. The Miho Museum, a half-hour drive from Kyoto, is one of the most spectacular and out-of-this-world buildings in the world. Designed by I.M. Pei, the architecture of this place reminds you of some utopian space odyssey – and that’s precisely what Nicolas wanted to achieve, sending down a line of futuristic silhouettes with equally futuristic setting in the backdrop. 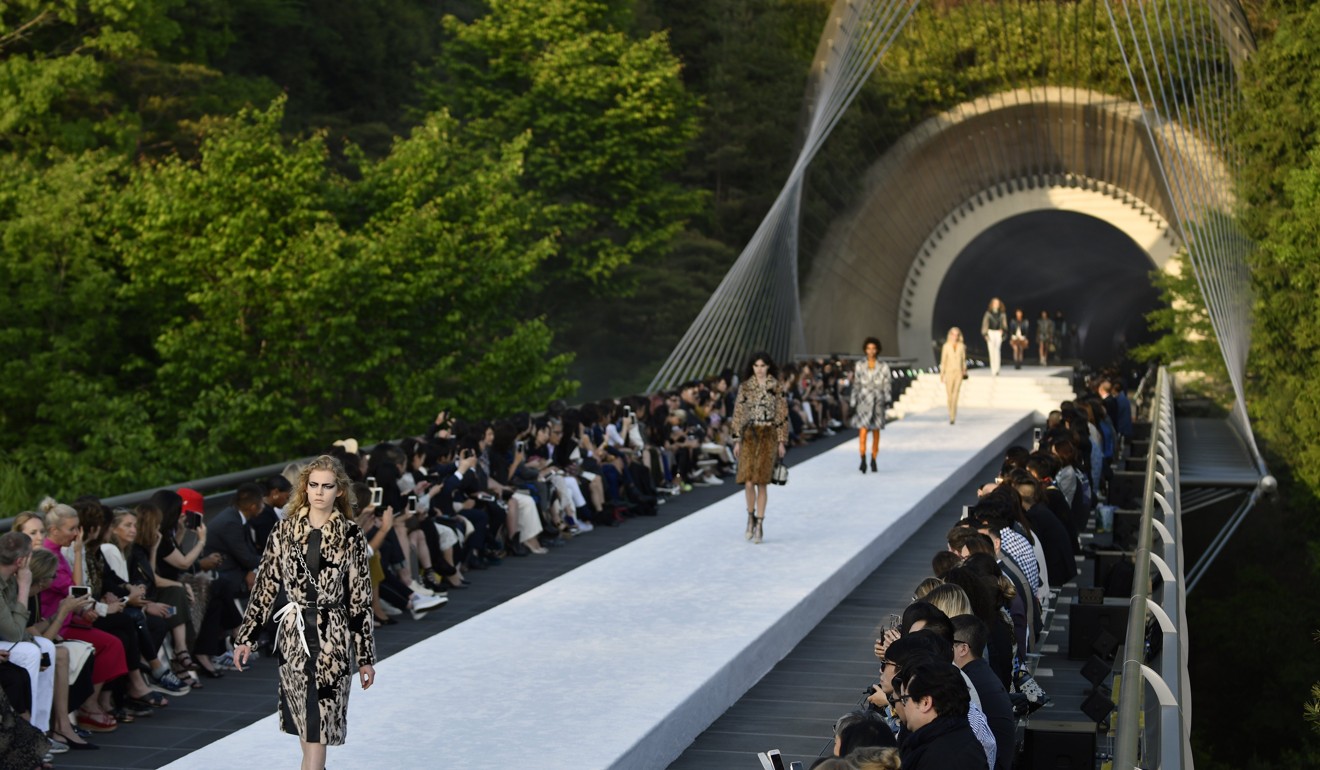 *1,2,3. Territory by The Blaze, Indestructible by Robyn (remixed). Just wow.*

Continuing to love Japan and its culture, the creative designer of the French maison did an impressive job in conveying his long-term relation with the country. He found just the right balance, not falling into oriental stereotypes, and what’s worse, cultural appropriation (a frequent problem among other designers). Those were the modern-day, badass attitude samurai girls, wearing over-sized biker jackets with leopard prints, skater shorts and weaved leather vests. Kansai Yamamoto was on Ghesquiere’s mind while designing the collection – that’s the Japanese designer, who dressed David Bowie in glittering jumpsuits and paved the way for Yohji Yamamoto and Kenzo Takada few decades ago in Paris. Now, his bold, artistic legacy gets a revamp according to Vuitton codes. Handbags with Kabuki eyes, prints of local fishermen, a variety of toned colour combinations: Japanese avant-garde of the late 20th century goes slightly more French, more refined. In an effortless, loose way. The collection, in overall, has something of Ghesquiere’s early Balenciaga days. But the designer has already established his language at Louis Vuitton – so it feels just the right way. 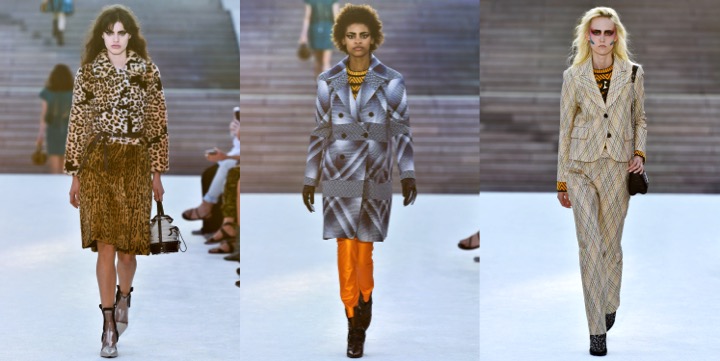 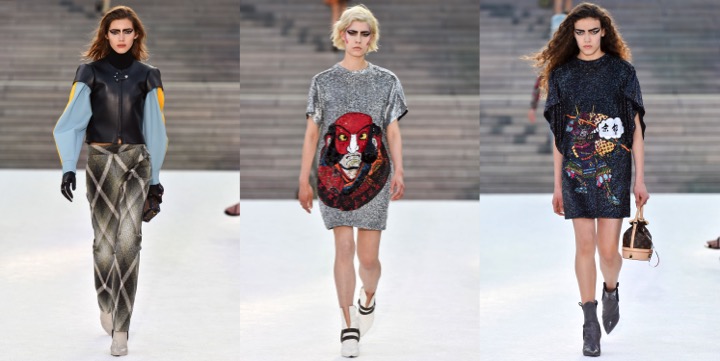