For autumn-winter 2021, Paul Andrew delivered the most unexpected collection for Salvatore Ferragamo. His vision for the brand was all about a formal-meets-casual wardrobe, kept luxurious and upscale. However, suiting mostly failed, and COVID just made it even less in demand. So it was a smart decision to stirr things in an attempt to catch the attention of a new customer. Andrew took Ferragamo to the outer space. “I believe that at Ferragamo we weren’t pushing boundaries enough, as the founder did,” said Andrew. “He was an incredible, forward-thinking force. This collection is an invitation to introduce the label to a younger audience. Embracing the mindset that Salvatore had is our key to the future.” The designer basically made a sci-fi movie – the video presenting the collection was an elaborate affair. A tour de force shot in virtual reality and CGI, loosely based on pre-millennial cult movie Gattaca, it had illuminated tunnels reminiscent of those trespassed by Uma Thurman; space ships coming past windows open onto a futuristic city; a circular rotating platform on which a glass prism refracted rays of light into a rainbow. “The rainbow is related to Ferragamo’s past, as Salvatore became famous for the rainbow wedges he created for Judy Garland,” explained the designer-turned-director. “And obviously the rainbow is a symbol of new positive beginnings.” Clothes-wise, Andrew proposed a play on classics seen through a technical, futuristic prism; elevated, slender uniforms were given a ‘younger’ vibe, lifted by a luminous, fluorescent color chart. He called some of the pieces ‘bionic’ – tight-fitting stretchy bodysuits and all-in-ones inspired by motorcycle suits – and had them layered under elongated, heat-processed, chrome-free-tanned leather coats; under pants or ponchos in clear biodegradable PVC; and complementing suit propositions in rubberized wool. Some of it looked great, some felt quite unedited, and some – out of place. The chainmail accents (kind of felt like Paco Rabanne landed in Florence?) and shaggy mohair fringing are exciting new additions, but I wonder if they really match a Ferragamo kind of person. 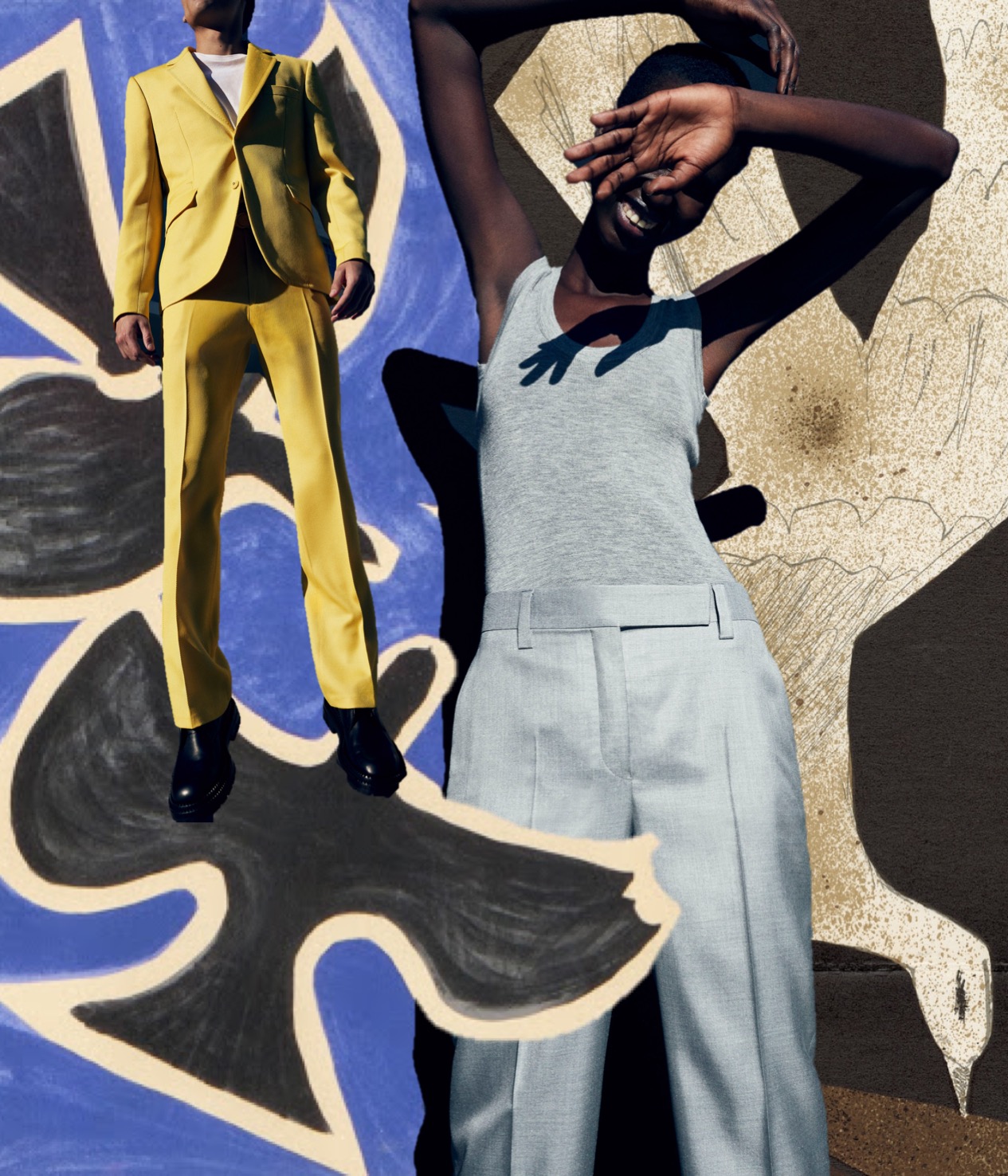 Pre-fall 2021 collections are gradually popping up (yes, the industry still wants you to think about next year’s autumn in this year’s winter). Paul Andrew likes to put things in context; he has so far used films and historical locations to frame his fashion narrative. In keeping with that practice, he shot the Salvatore Ferragamo pre-fall lookbook in Florence at Manifattura Tabacchi, a former cigarette factory built in the modernist style of the 1940s, which was recently rescued from a state of disrepair to become Polimoda’s campus: “It’s a progressive, creative place full of life and enthusiasm, with lots of young people hanging around,” he told Vogue during a Zoom call from his Florentine studio. It proved an apt location to convey the collection’s feel. “I want to bring joy and beauty to this world.”Andrew isn’t alone in his desire for turning toward the positive; nor is he alone in the urge to contextualize collections within a larger frame. Social and cultural issues have become non-negotiable parameters for every fashion designer who wants his creative work to resonate with a broader audience. Customers more than ever buy into conscious creativity – ethical, responsible, value-driven. Andrew is playing his part, steering Ferragamo into sustainable territory and keeping his commitment to responsible practices – reducing waste by choosing deadstock leathers; using recycled nylons and certified natural fibers; editing collections with a tighter focus. Doing less but better has become his mantra, a belief that has him embracing a timeless, nondisposable aesthetic. Collections are built around high-quality investment pieces that have longevity and durability, while retaining a strong contemporary appeal. This pre-fall collection is a good example of his new approach. The chic purity of line and the slender construction Andrew favors looked timeless indeed; what made the offering distinctive was its focus on tactile leather dressing offered in many variations, highlighting the artisanal expertise of the Florentine house. Shapes and silhouettes for both the men’s and women’s lines conveyed a feel of ease and comfort, while retaining their sophistication. He didn’t shy away from the occasional statement piece either. Ample A-line and wrap dresses featured adjustable matching belts or scarves, changing them into more form-fitting shapes; slender tunics and elegant shirtdresses were often worn over matching trousers or lightweight cashmere leggings. A leather circle skirt patchworked in a bold geometric archival motif added a decorative flavor, as did the contrasting hand-painted edgings on a softly architectural nappa coat dress. “I’m really thinking of what customers will want and desire after this COVID nightmare will be over,” he mused. “We’re keeping our fingers crossed that they’ll be back in stores and eager to be dressed up and to buy and invest in fashion. But they’re not going back to the old ways.” Things have to be shaken up and changed, then. “My feeling is that people will continue to be more casual, after months at home Zooming in their pajamas I’m not sure they’ll be suddenly dying to be in form-fitting garments again,” he said. “So it’s a balancing act. Whatever you do, there must be some casualness and ease combined with high-values and sophistication, refinement, beauty. But mostly, it has to have a certain vibrance – and to bring joy.” 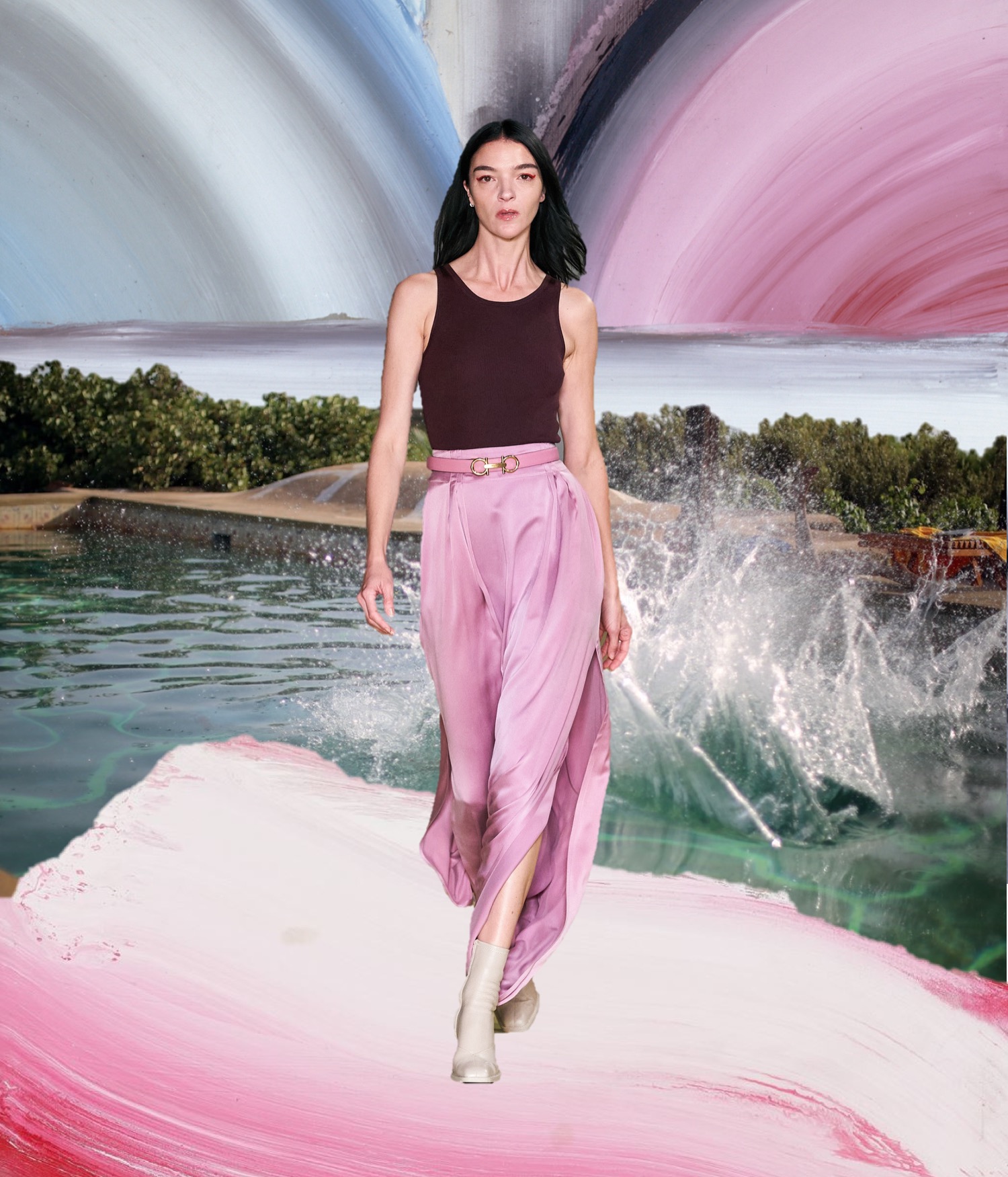 As I wrote earlier this week, it’s really all about pragmatism versus escapism this season. Designers seem not to even look for a balance between the two – they are either this or that, period. And in Milan, we see this division the most clearly. During lockdown, with time on his hands and having exhausted all of Netflix, Salvatore Ferragamo‘s Paul Andrew went on an Alfred Hitchcock binge. The Birds, Marnie, and Vertigo were at the top of his best-of list; he found out that the same obsession was also shared by director Luca Guadagnino, who in his film Io Sono l’Amore apparently referenced a lot of Hitchcock – the gestures, the lighting, the poses; a certain high-class look of enigmatic sophistication. Andrew wasn’t sure at that lockdown time if and when he would be able to stage a real show, so he decided to go for a short movie instead. Asking Guadagnino (I adore him!) to work together on a project for the spring collection was just in the cards – and a thrilling opportunity. The film, shot in an eerily empty and utterly Hitchcockian Milan at the beginning of August, opened Salvatore Ferragamo fashion show, which was staged in the open air in the hectagonal colonnaded courtyard of the late Baroque period Rotonda della Besana. Backstage before the show, Paloma Elsesser was looking intently at one of Andrew’s moodboards, wearing an hourglass black leather number that could’ve come straight out of Kim Novak’s wardrobe in Vertigo. The dress signaled a more sensualist, high-gloss direction for the designer; he tried his hand on less oversized proportions, favoring instead a shapely, more feminine, form-fitting silhouette. The color palette, inspired by the chromatic quality of Technicolor, also added a hint of sensual vibrancy, and visual punch. “That’s my favorite, Tippi Hedren’s green,” he said, pointing out a neat little tailleur with a waisted jacket in eau de nil; it would’ve actually looked slightly bourgeois, if not for the off-kilter intervention of a fluid sarouel, replacing the more conventional pencil skirt. While sticking to the refined linearity he has envisioned for Ferragamo, Andrew punctuated this collection with impactful highlights – think a seersucker checkered fabric with a tactile finish; thick knitted and knotted pieces with an artsy flair; quivering feathers sparsely scattered on straight cotton pants or on a pinafore. The co-ed collection was edited down by Andrew to just 30 looks, which was surely beneficial to conveying a convincing rhythm and a focused message. “Less but better, it’s our way forward,” he said. “I’m really into it.” The Andrew/Guadagnino connection also proved a winning creative combination, to be hopefully continued in the future. “Lockdown has been dark, surreal, and mysterious, like a Hitchcock movie,” chimed Andrew. “But strangely, like in a Hitchcock movie, the ending is always somehow beautiful. I’m trying to celebrate the beauty that is going to come out of it.”