What: Dolan’s denim jackets and signature shirt-dresses with exaggerated cuffs are perceived as the new ‘basics’. Why? Noting their couture-level tailoring, Matthew’s fashion is realistic and wearable, but far, far from trivial. It’s not about few good styling tricks or a thoroughly contrived Instagram ‘image’ that fuels the label. Dolan let’s the clothes do the talking for themselves, which is especially rare in the industry. The talented, young designer as well revises American fashion, creating the ultimate classics of 2018 (and for years ahead). SZA and Rihanna approve, just as the fact that Matthew became one of the finalists of this year’s LVMH prize.

SS19: This season, Matthew took a closer look at the American society, dissecting various ‘uniforms’ and recreating them in stylishly utilitarian looks. Splashed with colours – from acid green to bold fuchsia – the collection had the pieces you want to wear now: a belted, over-sized blazer, the ‘cashier’s vest’ worn over an over-sized shirt, a pair of bermuda shorts that can be mistaken with a midi-skirt. The young designer mentioned Claire McCardell as one of his main reference points for spring-summer 2019. McCardell is credited with the creation of American sportswear, and injecting it into women’s wardrobes. That sort of democracy appeals to Dolan, and he conveys that through the functional, yet not boring garments. It’s exactly fashion that the early 20th century designer would totally approve. 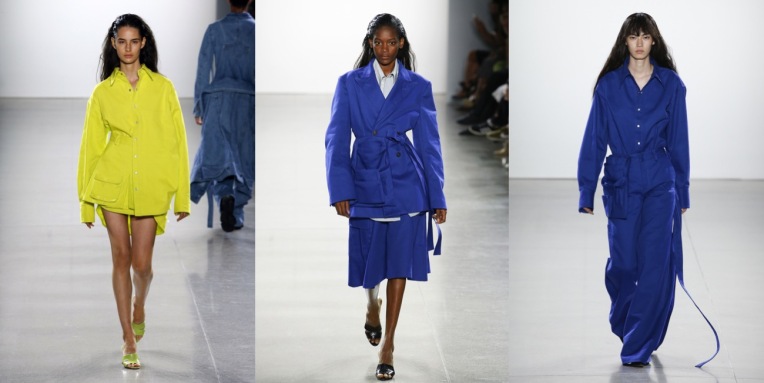 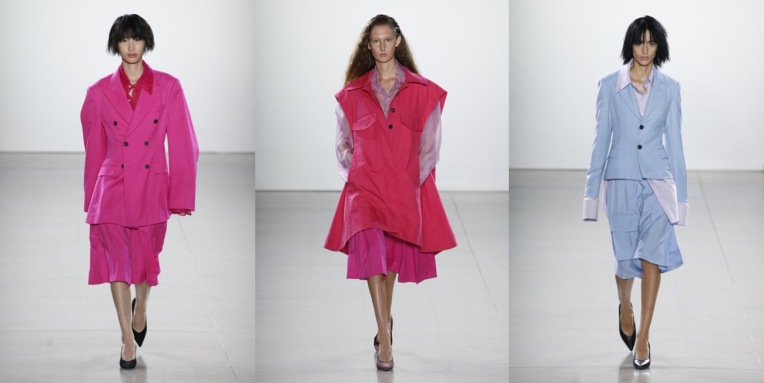 Raf Simons’ resort 2019 collection for Calvin Klein 205W93NYC feels like a remix. It’s a smooth continuation from the line’s remarkable autumn-winter 2018 collection (note the fireman jackets and heavy knits), a reminder of the designer’s classics for the brand (polished cowboy boots) and a start of something totally new. Colour blocking! The clingy, maxi-length knitted dresses in bold yellow, pink or blue are feminine, but not banal (and are an echo of Simons’ work for Jil Sander, which makes this addition even more special for the fans). That major play of colours jumped into menswear as well. Other than that, we’ve got America’s most renowned university logos, all over varsity jackets, handbags and pockets of blazers. Personally, I think that’s the weakest point of the collection, but the one that will sell best. Still, it’s consistent to Raf’s thorough examination of the Americana theme he moves every season, in various aspects. Pre-collections are not main collections, so you know, Raf couldn’t go too far. But it’s a proper balance of commercial and daring. 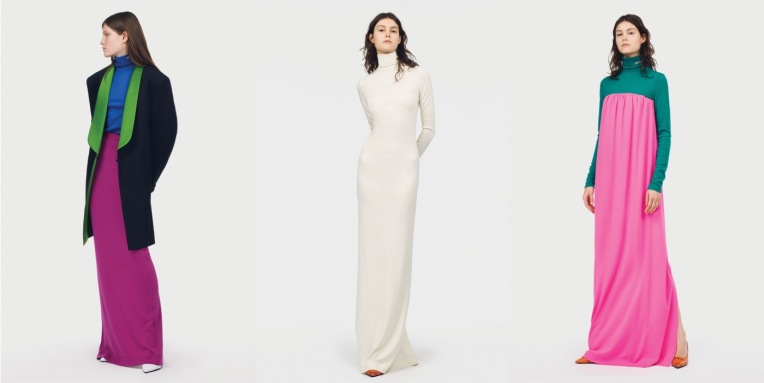 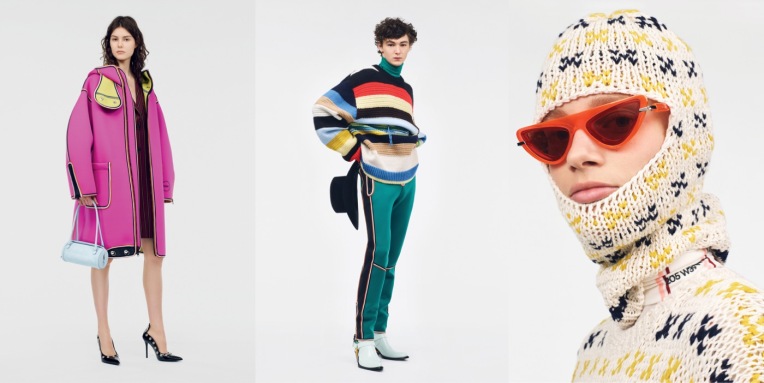 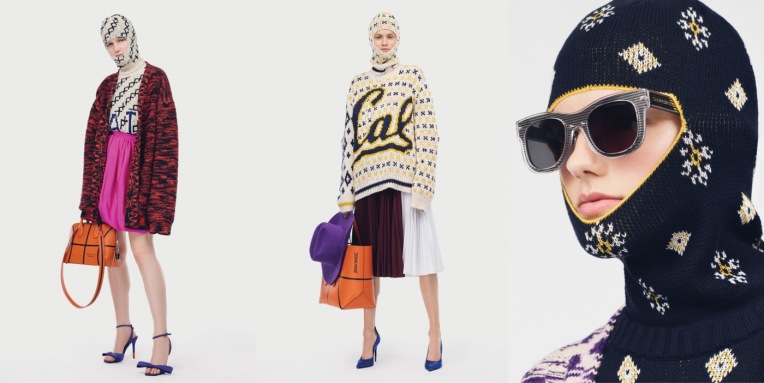 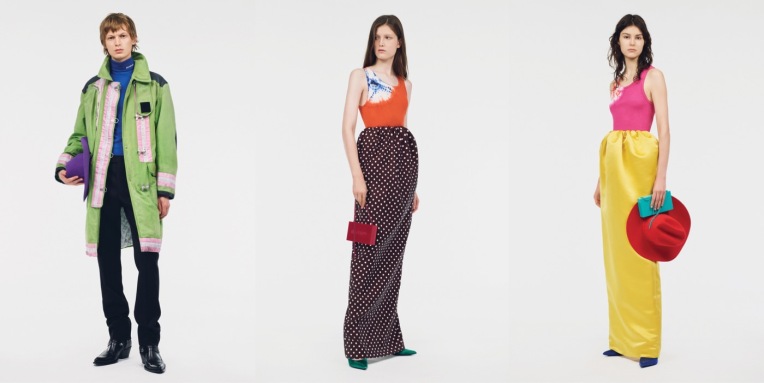 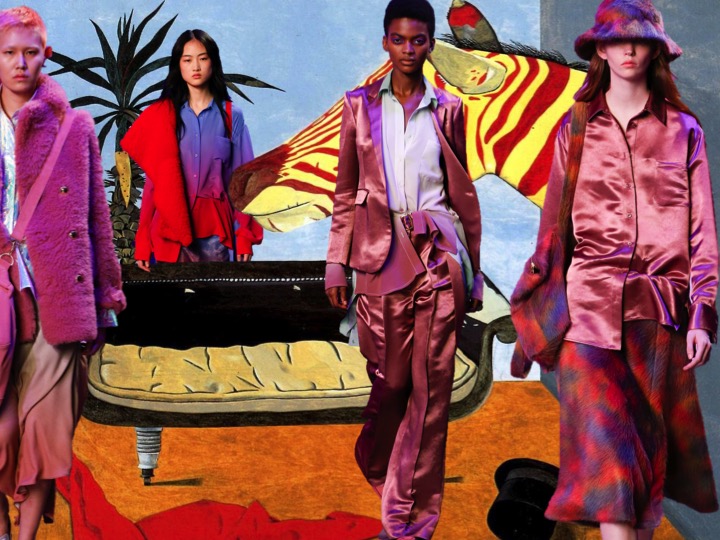 While for the last few seasons I didn’t really understand Sander Lak‘s phenomenon, his autumn-winter 2018 collection looks, well, really good to me. Since the start of his eponymous label, Sies Marjan, Lak indulged himself in pastels mostly. “Last season was light, a dreamy state. This is still a dream but an intense one. Not a nightmare, not a happy dream, not a wet dream.” Then, a lucid dream! This time around, it’s more about psychedelic ombré of iris purple, crimson red, deep blue and forest green. Colour has always been his soft spot, and the collection shows how good the designer is in mixing and crushing the most unlikely palettes. From gowns draped with taffeta and cute shearling jackets to slouchy suits and relaxed pajama shirts, it’s like a delightful, yet demanding, spectrum of must-haves. If Sander’s latest collection had its colour palette’s name, I would definitely call it the ‘sweet melancholia’. 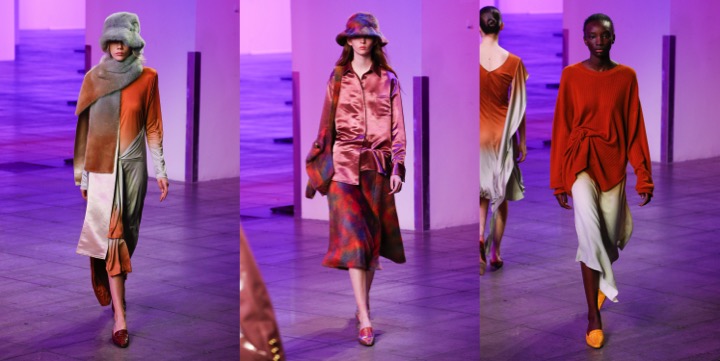 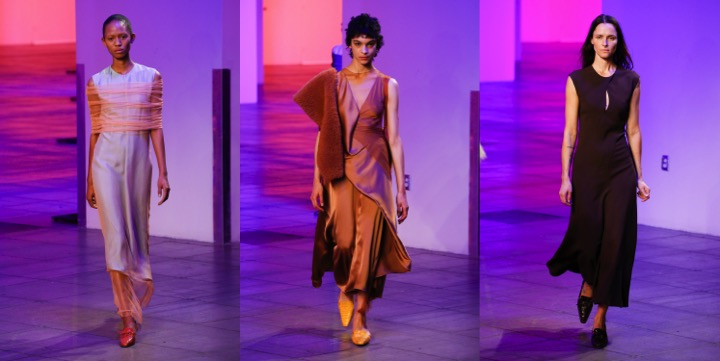 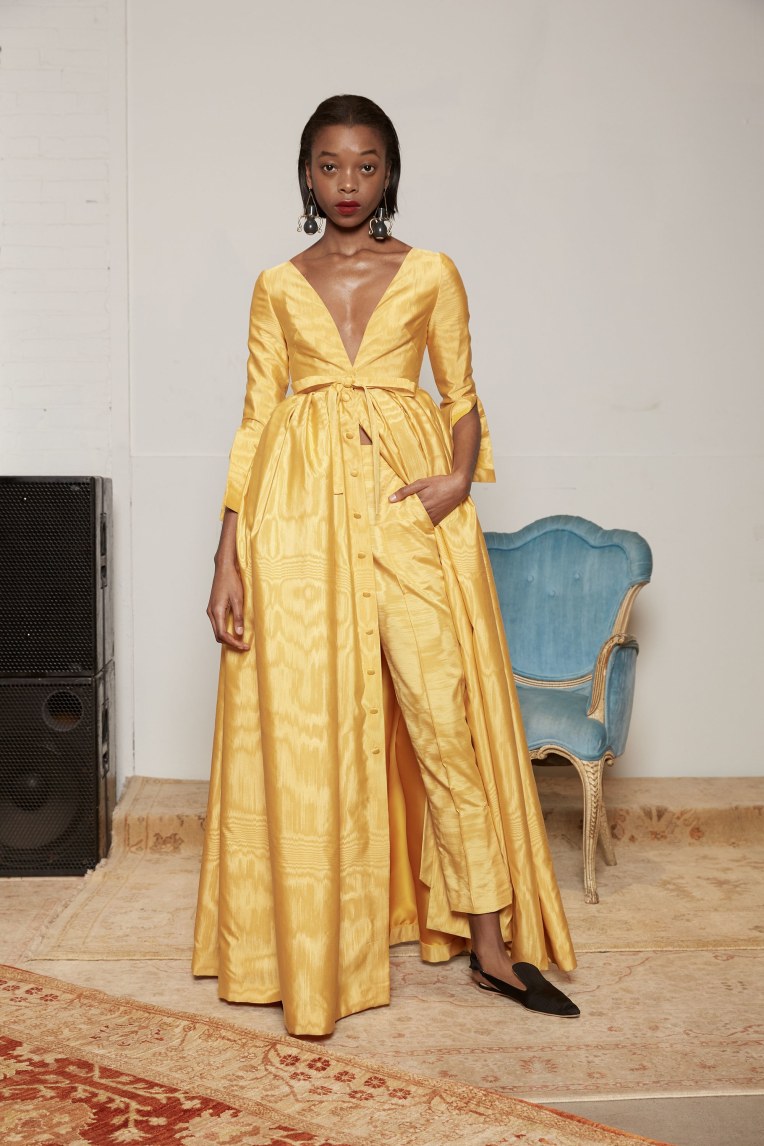 Parachute top with ruffled sleeves, ball-skirt in pastel-green, purple total-look made of eye-catchy ‘marble’ fabric, lemon pantsuit, patchworked robe-dress, another blouse with voluminous ruffles, but in red. Yes, you’ve guessed it right – I’m speaking of Rosie Assoulin‘s dreamy wardrobe for autumn-winter 2017 collection. Being New York’s queen of contemporary eveningwear and ‘makes me smile’ everyday essentials, Assoulin invited her guests to a tea-party-kinda presentation, which not only let the editors observe the delightful gowns in motion – it was also an occasion to celebrate the designer’s footwear line. Assoulin was inspired with fancy interiors and those little, meticulously crafted details that make a room look high above the average. That’s why some of the shoe heels reassembled table legs! While other designers get melancholic this season, Rosie’s signature optimism stays for good. But who wouldn’t feel cheerful, wearing one of those floral slip-dresses next autumn? 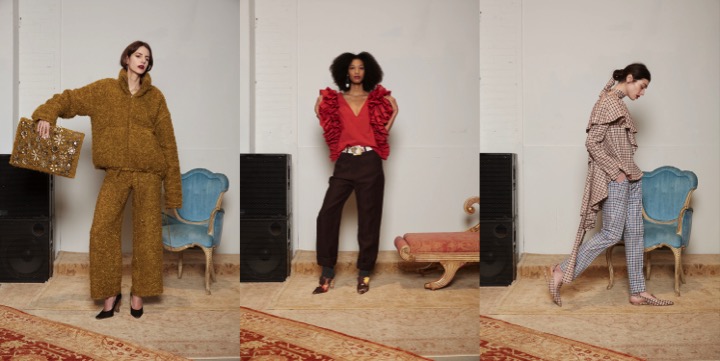 There’s a distinct difference between Alessandro Dell’AcQua‘s Rochas, and his Milan-based No21. While his more youthful brand is about lady-grunge and exciting layering, Alessandro seems to be a mature man at the historic house in Paris. But first, lets praise Molly Goddard for reviving tulle and making it a “thing” in fashion industry. The trend spreads fast, and Dell’AcQua adores it. The first model emerged in a yellow frock, with pink tulle peeking from underneath, wearing knitted gloves in the same colour. Effect? Feminine, flirty and sweet. Colour combination fantasy didn’t end here: the creative director has a sharp eye for colours, and he’s a master of combining the most unobvious shades. In other words, the palette was excellent, from carrot-orange and lemon-yellow, to flesh-pink and forest-green.

After being appointed to his new role in 2013, it’s pretty clear that the Italian designer feels like home at Rochas. It’s intriguing to see how the brand develops under his wings – it’s becoming a favourite of such anti-celebrities as Soko, French indie-rock musician. She appeared in the front row with her boys (all dressed in dresses, accidentally matching the main focus of the collection). Fortunately, Rochas won’t end in the box of brands with “nice” dresses – it’s already far, far away from that point with it’s new off-kilter nature. 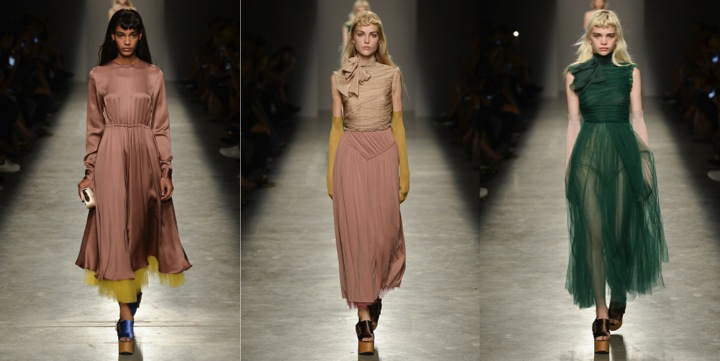