Back in the 80s and 90s, nobody did a (fashion) show like Thierry Mugler. In 2023, Mugler, the brand, lead by Casey Cadwallader, delivers an equal level of showmanship. “We’re showing during couture week because we’re bad. At Mugler we do whatever we want,” the designer stated before the choreographed mayhem kicked off. “We’re quite an outlier in the way we do things,” he added. What went down: a runway frenzy that idolized the talents and bodies of models and friends of the house simultaneously merged with live-captured dolly footage of said models and friends, which was consumed on a vast screen erected at the top of a set of stairs. And all over the internet, obviously. Crews of men on movie dollies slid on tracks filming the wildly whooped-at cast: Arca, Ziwe, Mariacarla Boscono, Shalom Harlow, Eva Herzigova, just to name few. There was hair swishing galore. A synchronized handbag-swinging lace-bodysuited dance troupe occupied some center steps. Then one by one, each Mugler supermodel climbed aboard another dolly, on which they could pose around a pole for the return journey. This second crew had a low-down camera which zoomed up crotch-wards, deploying a technique which might be termed up-skirting – had there been any skirts in evidence. Magnified on the monolithic screen, these oooh-aaah fragments were flashed in a live-streamed mix. What about the fashion content? Categorizing it as a collection of leather and lace doesn’t quite cover it. One thing to be said: Whether manifesting as baggy-topped leather chaps suspended under a hip-grazing heavy-duty chrome-zippered bodysuit, or a bisected one-leg, one-sleeve motorcycle suit, or indeed anything Cadwallader did with stretch black lace – it all miraculously stayed in place. And that is quite a technical achievement. It’s tricky to compare Cadwallader’s Mugler with Manfred Thierry Mugler’s original haute couture extravaganzas. In 2023, as far as being inclusive to bodies and identities, Cadwallader for sure outdoes the master. But Mugler was the outlier in his time: the man who foresaw fashion shows as cinematic spectacles. It’s a great continuation of the legacy.

For Burberry‘s spring-summer 2023 collection, Riccardo Tisci seemed to have many ideas. But in the end, the overall result was messy and unedited. It came as a surprise, because his recent offerings for the British brand suggested he finally found the right track. After five years in England, Tisci (so often labeled “goth” by the fashion press) has gained a better understanding of the intricacies and eccentricities of British society – such as the beach and summer culture that inspired his spring collection for Burberry. “British summer is very different to anywhere else in the world, because Britain is basically built on big cities on the water. That means you really see people dressing on the beach, because you never know when it’s going to rain or when there’s going to be sun. The beauty is the goth on the beach, like these kids we filmed the other day,” he said after the show, referring to the show’s goth-tastic teaser filmed in Margate. “Or, you’ll see a wedding, or someone who’s gone there at lunch time to read. It’s all different personalities.” Since Tisci brought a more sensual spirit to Burberry, its swimsuits have risen to best-seller status. That fact, mixed with his homage to the beach-going goth, created a collection of swimwear fusions and hybrids. Press release is one thing; in reality, the concept looked too awkward and clumsy. The model casting, featuring Naomi Campbell and Karen Elson, didn’t help in elevating these clothes. Swimsuit elements like bikinis and bathing suit cut-outs were entered into dresses and tailoring, which simultaneously incorporated the trademarks of the goth wardrobe: lace, netting, perforation, gothic fonts, and crinkled negligees. De- and reconstructed outerwear evoked the dress codes of the industrial corner of the goth population, with dissected hoods and sleeves tied around the waists of trench coats and three-piece suits with big-buttoned gilets replacing the traditional vest. After Burberry canceled its original presentation during London Fashion Week out of respect for the national mourning period that followed the death of the Queen, Tisci squeezed the show in on the Monday between Milan and Paris. Presented in a naked warehouse in Bermondsey – the London Contemporary Orchestra lined up in the middle of the space – it unfolded in complete silence before the soprano opera singer Nadine Sierra broke out in a poignant aria. It wasn’t until the finale that the orchestra joined in. “It was a moment of respect. She was the queen of the world – every country respected her,” Tisci said.

Khaite is now one of New York’s must-see brands. Celebrities jostle for seats and, editors are eager to buy and wear it. Catherine Holstein knows her audience. “That independent, New York, strong, stealth woman – that is who I’m designing for,” she said backstage of her spring-summer 2023 show. For spring she sent out her dependable mix of sequins and silk fringe, leather and denim. Because she was looking at the 1990s films of David Lynch, Wild at Heart in particular, there was a good amount of python print. Nicolas Cage’s character wears a python jacket in the movie; Holstein stamped the pattern on leather for exaggerated bombers and pencil skirts, and silk charmeuse for a voluminous peasant dress. A little python goes a long way, admittedly. The other novelty here was bubble skirts (a trending item this week). Their horsehair reinforced waistbands sat at the crest of the hip bones below everything from a mesh bustier to a crystal embroidered shirt. The low waistlines gave those outfits a cool attitude – polished but not pretentious. Because Holstein is designing for herself and for women like her, she’s got the attitude aspect nailed, but that’s not to diminish her eye for proportion or the exacting lines of her tailoring. A strong-shouldered, elongated jacket with crystal-studded lapels was a looker. You’ll be seeing it around next autumn with a tie-neck silk blouse and jeans and those little sandals.

Burberry, with the Italian creative director Riccardo Tisci in charge, is one British institution which continues to believe in centering itself on border-free, non-nationalistic points of view. Tisci’s policy of turning over his pre-collections to perspectives on Burberry’s Britishness from his international network of “friends and family” is a proof of that. This season, he looked to his American friend, the artist Jared Buckhiester, to collaborate. According to notes winged from Burberry HQ, the two see eye-to-eye on looking at the brand signatures through the lens of UK rave culture – the lasting impression of the late ’90s which Tisci has held close to his heart since he studied at Central Saint Martins over 20 years ago. Maybe no one ever actually turned up to illegal warehouse raves in Kings Cross or one-nighters in the muddy fields of England looking like the people in the lookbook. The remnants of that rave past seemed to have been cleaned up and embedded, perhaps, in hybridized military bombers and tailored coats in the form of the classic Burberry trench fused with a biker jacket. But really, the Tisci /Buckhiester vision is a far more polished, lux-ed up vision of what the notes called ‘workwear,’ spiked with some glam heavy-duty black leather and contemporary twists of gender non-conformity. As part of that, there are long, tailored column skirts – or possibly maxi-aprons – that appeared to be assigned to the menswear side of the collection. There are Burberry customers with conservative tastes, or, put it this way, people who are in the market for straightforward classic clothes without any overt branding. Tisci hasn’t forgotten to design for them this season. Alongside the Burberry plaid denims, the male maxis, and some of Tisci’s hyper sexy slit skirts and curve dresses, there were moments when clean, sharp tailoring – particularly two black tuxedo jackets – stood out. With all the black leather, sometimes head-to-toe, the dark sexiness returns for good to Tisci’s repertoire. It’s something we’ve all missed since his best Givenchy years, and wanted to see again at Burberry. Finally, we’ve got it back.

As I wrote earlier this week, it’s really all about pragmatism versus escapism this season. Designers seem not to even look for a balance between the two – they are either this or that, period. And in Milan, we see this division the most clearly. During lockdown, with time on his hands and having exhausted all of Netflix, Salvatore Ferragamo‘s Paul Andrew went on an Alfred Hitchcock binge. The Birds, Marnie, and Vertigo were at the top of his best-of list; he found out that the same obsession was also shared by director Luca Guadagnino, who in his film Io Sono l’Amore apparently referenced a lot of Hitchcock – the gestures, the lighting, the poses; a certain high-class look of enigmatic sophistication. Andrew wasn’t sure at that lockdown time if and when he would be able to stage a real show, so he decided to go for a short movie instead. Asking Guadagnino (I adore him!) to work together on a project for the spring collection was just in the cards – and a thrilling opportunity. The film, shot in an eerily empty and utterly Hitchcockian Milan at the beginning of August, opened Salvatore Ferragamo fashion show, which was staged in the open air in the hectagonal colonnaded courtyard of the late Baroque period Rotonda della Besana. Backstage before the show, Paloma Elsesser was looking intently at one of Andrew’s moodboards, wearing an hourglass black leather number that could’ve come straight out of Kim Novak’s wardrobe in Vertigo. The dress signaled a more sensualist, high-gloss direction for the designer; he tried his hand on less oversized proportions, favoring instead a shapely, more feminine, form-fitting silhouette. The color palette, inspired by the chromatic quality of Technicolor, also added a hint of sensual vibrancy, and visual punch. “That’s my favorite, Tippi Hedren’s green,” he said, pointing out a neat little tailleur with a waisted jacket in eau de nil; it would’ve actually looked slightly bourgeois, if not for the off-kilter intervention of a fluid sarouel, replacing the more conventional pencil skirt. While sticking to the refined linearity he has envisioned for Ferragamo, Andrew punctuated this collection with impactful highlights – think a seersucker checkered fabric with a tactile finish; thick knitted and knotted pieces with an artsy flair; quivering feathers sparsely scattered on straight cotton pants or on a pinafore. The co-ed collection was edited down by Andrew to just 30 looks, which was surely beneficial to conveying a convincing rhythm and a focused message. “Less but better, it’s our way forward,” he said. “I’m really into it.” The Andrew/Guadagnino connection also proved a winning creative combination, to be hopefully continued in the future. “Lockdown has been dark, surreal, and mysterious, like a Hitchcock movie,” chimed Andrew. “But strangely, like in a Hitchcock movie, the ending is always somehow beautiful. I’m trying to celebrate the beauty that is going to come out of it.” 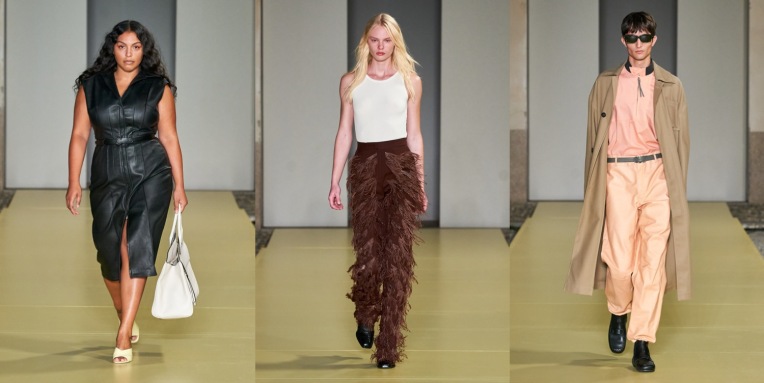