The old new identity implemented by Alessandro Michele for Gucci is well-known to all of us – and within the autumn-winter 2016 season, the designer has his first year as the creative director of the womenswear line behind. The “renaissance” mood Alessandro brings back to fashion deserves applause and praise. Noting that he has utterly revamped the pretentious sleek Italian empire into a brand, which considers Italian craftsmanship as priority, makes Michele’s warm softness more than a trend. It’s about his personal style, and his adoration to old, Italian paintings, antique rings and 70s / 80s attitude.

Just a few weeks before Britain’s choice whether to remain or stay in European Union, London has suddenly become the capital of resort 2017 collections. Firstly, Dior showed its mild collection in Blenheim Palace; secondly, Alessandro Michele, the creative director of Gucci, proved that Italian fashion goes in pair with anglomania. Covered with dark-green, needlepoint cushions, the famous Westminster Abbey was transformed into a venue for the most eccentric Michele’s show up to date (note: every show by Gucci gets even more peculiar and twisted…). Gucci girls and Gucci boys went down the Gothic church, all bold and playful, reivisiting cult fashion tribes of London. From Camden Market loving geeks to Rolling Stones fanatics in slim denim trousers and t-shirts (with old-school GUCCI logos – next season’s must-have), Alessandro praised Britain’s biggest style eras in this extremely non-chalant outing.

“To dive in this gothic sea of inspiration!” he began. “The punk, the Victorian, the eccentric—with this inspiration, I can work all my life!” The former, origing from Vivienne Westwood’s rebellious times of SEX boutique and Sex Pistols costumes, was reflected in tartan ball gown and badass, yet classy attitude of the clothes. One of the jackets was a perfect Victoriana sleeve sample, but all in baby-pink astrakhan fur; Thatcher-era Kensington grannies crossed the abbey during the show, wearing printed silk dresses and foulards on their heads; there was even a Spice Girl moment which will be remembered for long in the industry – rainbow striped platform sneakers HAPPENED, spicing it all up. It’s not a surprise that Alessandro thought of Scottish kilts, too – they were worn casually with lady-like, blue pea-coats. Chic, right?

Glittering with over 250,000 mirrored sequins, the all-pink venue of Gucci spring-summer 2017 collection reminded a high-profile striptease club. The released mist reassembled cigarette smoke, while the velvet stools and sofas suggested one thing – Alessandro Michele is not a step closer to such thing as “minimalism” this season. Indeed, the collection had something to do with trashy chic – just have a look at the extremely platformed footwear. “Prostitute in Venice used to wear these“, the designer said backstage, while discussing his references and inspirations. Red latex tights, worn casually with knitted skirts, screamed “sex”, too. Alessandro’s mind is not that innocent, after all.

There are different types of “love”, and there is a variety of romantic accents in Michele’s kitsch-appealing clothing. As always, the outing featured a line of polished and refined ready-to-wear, which has a lot to do with alta moda, as the Italians tend to say. Knitted cardigan featuring a monkey embroidery illustrated by artist Jayde Fish; satin gown with pineapple style sleeves, detailed with sequins and intricate embellishments; tulle dress with tapestry-like florals and a leather corset. Each piece might become a go-to for a fancy date, a boudoir night or an intoxicating night-clubbing. Michele never keeps himself distant from emotions in his fashion. This collection is connected to the intense topic of love, even if we mean a wounded, broken heart. One of the evening dresses had an embroidered, red heart in the front, stabbed with a dagger – is the ethereal woman wearing it ready for a night out, but without her parter? She’s sad, but she looks spectacular and very dramatic. A bamboo fan is even more ambiguous. The slogan on it stated “Blind for love” in gothic font, and Alessandro definitely relates to that as a designer searching for beauty, and a person in real life. 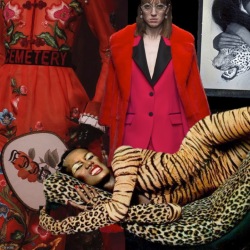