The autumn-winter 2016 collection delivered by J.W. Anderson is a playful continuation of the designer’s spring collection and pre-fall look-book – and it proves that Jonathan Anderson wants to have fun with fashion, too. “I love fashion! It should be fashion” is what he declared backstage of his London fashion show, perfectly stating the nature of the new season – there was something about the 60’s, looking at the mini-skirts with curvy, leather cut-outs and multi-colour ruffles. There was a sense of softness in these fluffy “clouds”, while the fur hoodies were like a Anderson-revisited nod to hip-hop music. Yet, the chain mail-like studs had you wondering about the much more harsh, punk side of the designer, which we’ve experienced in his last menswear outing. The collection didn’t have a one, straight line of references or inspirations, however it had a humorous, Pierre Cardin-ish outer space character. To conclude, these voluminous, edgy clothes made it clear – Jonathan is taking us to his playground. 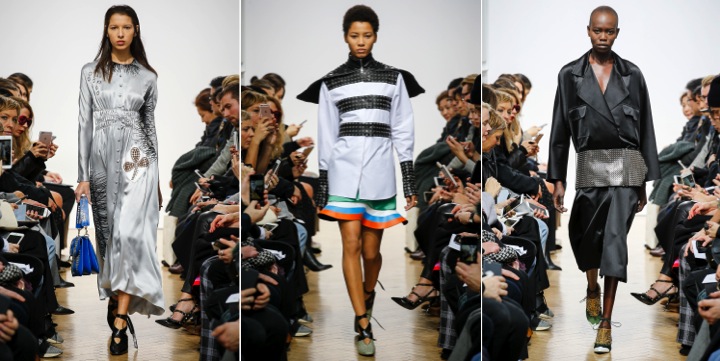