Rick Owens‘ collections aren’t there to just please everyone around with a pair of ‘must-have’ sneakers. ‘Sisyphus’, the autumn-winter 2018 collection’s name, is an example of how the designer reacts towards the surrounding world, and the industry. “I think we’re entering this period of conservatism and creative smallness. And that’s me being very judgmental, but it’s frustrating. I’ve had a lot of resistance in things that I’ve wanted to do creatively—technical resistance—and it kind of discourages you from trying to create things. But then I think, ‘Why do I think that my stuff is so worth telling that I have to force it?’ And then that makes me think of aggression: How much does it take to really be a designer; to insist that you be listened to?”, is how he questioned himself and other matters that affect today’s designers. The collection itself was quintessentially Rick: big volumes, dark colours, deconstructed garments. But the identity behind every single piece is so powerful, that it doesn’t really matter that the designer didn’t do an entire performance, or chose a far-fetched runway venue. Focusing on the end product is the most important. Also, in the world of Owens, pretty much everything is brand-made. One of the key fabrics was a softly felted-looking material that the designer said was based upon his favourite Berber blanket. “I’m trying to do as many exclusive fabrics that we develop ourselves, with people that we’ve known from the beginning. I’m trying to make all of the collection exclusive: making things as profoundly mine as possible. If I could water the cotton with my tears, then I would!” That’s what you call a beautiful devotion. So, is it all so Sisyphean in the end? 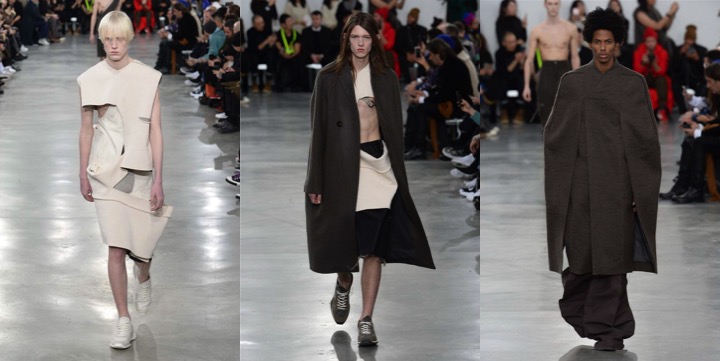 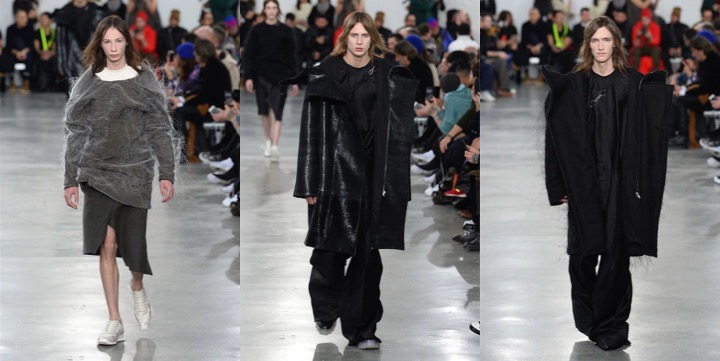