Prada by Miuccia Prada and Raf Simons. Even the way this sentence looks and sounds feels fascinating and so out-of-this-world. The most exciting moment of the season happened yesterday afternoon in form of a livestreamed video and an insightful Q&A afterwards. The fashion industry hasn’t been through such anticipation for years, maybe decades. We all had some other-worldy expectations of what these two innovators would bring to that table. And maybe that was the mistake, for us, the Miuccia & Raf fandom. To be really, really honest: I expected to be wow-ed, utterly surprised, provoked, have some polarised “love it” or “hate it” kind of feelings. But my first impressions of the collections were actually mild. The line-up, presented in one of Fondazione Prada‘s spaces (that shade of yellow, which was chosen for the curtains and the carpet, is the new Pantone colour of 2021, I’m sure), was simple, easy, encylopedic. A sort of Chapter 0, a work-in-progress. In the interview, Miuccia noted that they both had big delays caused by the coronavirus, which is understandable. Maybe they decided to keep the debut quiet and without a fuss. As both designers concluded, it’s the beginning. While at the moment it feels rather like a resort Prada collection styled by Simons (over-sized printed hoodies, slim turtlenecks, all his signature traces are here) my excitement for what’s to come is getting even more intense. But more about the spring-summer 2021 collection. Part of it feels very commerce-wise – say, the exaggerated triangle Prada logos (in a close-up, they are distorted and made out of a sort of satin rosettes), voluminous sweatshirts, youthful prints and conceptual word-plays. Then some of it is all about the lady-like, couture-esque notion – especially the clutch coats, which are a sort of Miuccia trademark that had its big come-back for resort, or the spleated skirts that create an elegant and very refined silhouette. The last “episode” was about the Prada codes: black nylon (I know it sells, but the brand pushes it too much for the last couple of years) and ugly-chic prints (this part was also forced as for me). The show even began with a sort of old-new Prada uniform, the building blocks of which are long, narrow, ’90s-ish trousers; a sleeveless, tunic-length tee with the triangle logo; and pointy-toed slingback kitten heels in a contrasting colour. “How Miuccia dresses is very often a kind of uniform one way or another, and that was direct inspiration for me for the show,” Simons said in the interview. So, as we can see, it’s the start of a dialogue, which will hopefully flourish into something much more powerful. In a quote provided by the house, Miuccia explained their thinking: “In a time of incredible complexity: what matters? what is meaningful? That is a question we asked ourselves. We wanted to create something that makes sense to people, something that is useful. Everything we do should allow people to live better.” In another provided quote, Simons elaborated: “The show is about emphasizing humanity. It is about women, and everything around them supports them, showcases their characters.”  Balance of creativity and pragmatism, something that probably is the best approach under current circumstances. 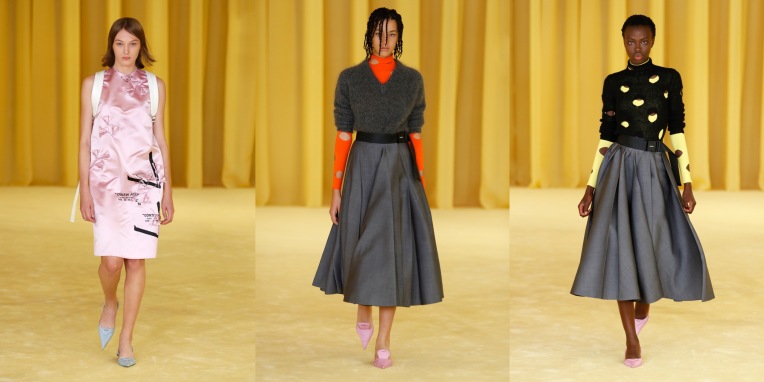 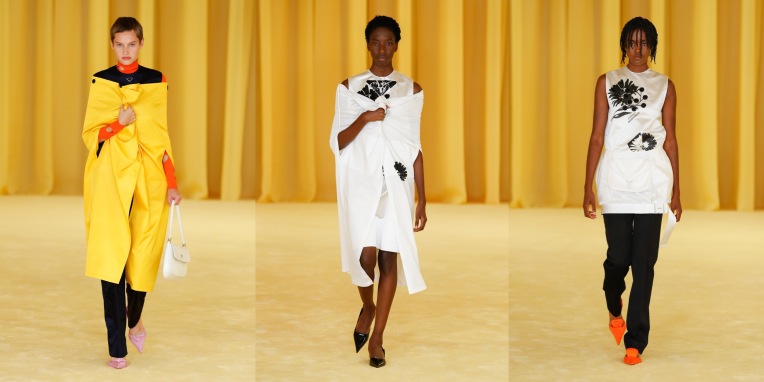 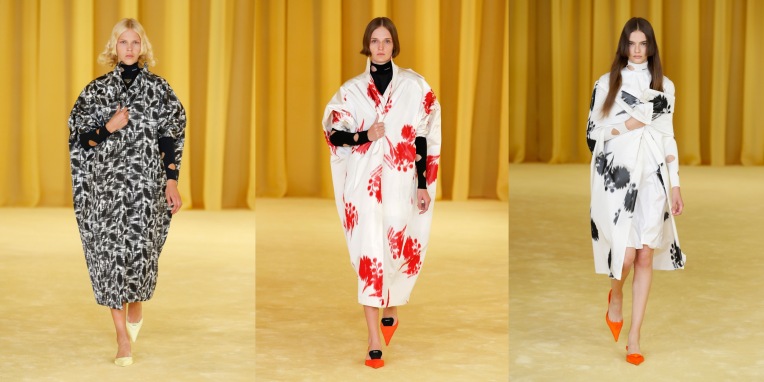