If there’s one designer that took wearing a mask (and covering your face in general) or protecting your hands seriously in times of corona, it’s Marine Serre, the queen of dystopia-foreseeing in Paris. Even though some of her spring-summer 2021 looks seemed bizarre and quite ridiculous, that’s a line-up that literally reflected the present circumstances. The collection has two main focus points. Firstly, the movie, titled Amor Fati, that she made with directors Sacha Barbin and Ryan Doubiago and composer Pierre Rousseau. The short film is compelling. It’s both unsettlingly dystopian in its depiction of menacing clinical interiors and Dune-like acrid skies and emotionally affirming in its choreography of human kinship and community. Two people, the Iranian-Dutch singer Sevdaliza and Juliet Merie, Serre’s good friend and long-time collaborator, interact with a series of people from intense worlds, who are clothed in the collection’s second-skin face-shielding bodysuits, sapphire and cobalt blue utility jackets and cargo pants, and sharply delineated tailoring rendered in a covetable new lozenge jacquard version of her leitmotif crescent moon. And, secondly, Serre mentioned that she had been thinking about how bike usage is up by 30% in Paris, the city that she calls home. Serre’s upcycling experiments led her to work with carpeting, using it for tassel-edged skirts, shorts, and half-zip anoraks, the fabric’s almost baroque decorativeness in stark contrast to the functionality of the pieces it’s used for. That’s where that Parisian bicycle usage came in. For all Serre’s marrying of cerebral impulse and craftsmanship, she’s also deeply pragmatic. “You don’t need a midiskirt if you can’t bike in it,” she said. “You need to be able to function in the clothes, otherwise you might as well just wear a tee and jogging pants.” That sense of using creativity to inform her realist’s view of the world could also be seen in her accessories, what with the whistles, bottle openers, and a cape-like visor, also made from the upcycled carpet, and a neat commentary on the face shield’s newfound ubiquity.  Essentially, it’s Serre’s oscillation between these two points, creative ambition and practical exigency, that make her one of the most vital designers of the moment. Amor Fati, she said, was created during lockdown, and that pause allowed her even more creative agency while also giving her a chance to think about the trajectory of what she’s doing. “It gave me some time to reflect,” she said. “It’s not easy. Things are changing faster than we can.” One thing she decided to do to counteract that: reaffirm her signatures and essentials, and explore how they could interact with our ever-evolving lives. There are plenty of those terrific multi-pocketed utilitarian pieces of hers, for both men and women, in biodegradable nylon or recycled moiré, rigorously sculpted into graphic shapes. 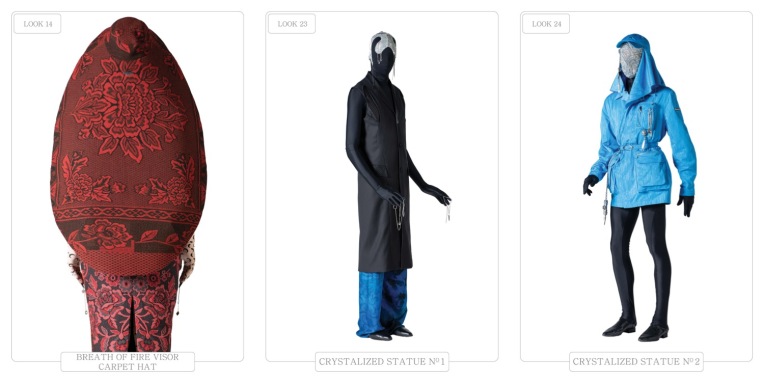 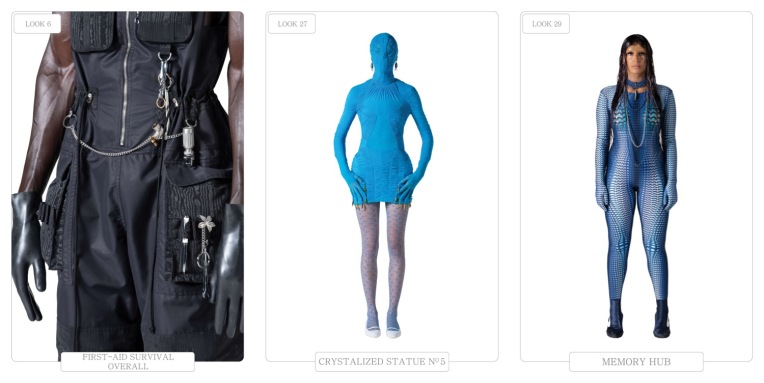