At Maison Margiela, John Galliano once again reflects on the digital age, with an exploration of hope, heroines and liberation in the face of “the chaotic noise of the social media debris“. Also, this was one of the most deep collections in a while coming under the Margiela label. Galliano is British, and Brexit is a topic that moves him personally. One of the slogans frequently voiced by the right is that British independence is “what we fought for in the war” – a false, trigger phrase which ignores the fact that the fight was against the forces of fascism in Europe. His spring-summer 2020 collection was a timely salute to the ordinary young men and women – the nurses and airmen, the army and navy boys – who stepped up to win the victory against Nazism in alliance with the French Resistance in occupied France. “Reverence for the lessons of history and what they taught us,” read a thought line in his press release. “Stories of hope, heroines, and liberation are forgotten as history draws ever closer to repetition.”  This couldn’t be put together in a better way, really. First look: a navy cape, white hospital sleeves, and a gray serge pencil skirt. Second, a model in a black dress with a veiled hat trimmed with a feather, inspired by the the 1930s or 1940s (probably a nod to the Frenchwomen of the Resistance who went about their undercover work carrying secrets and explosives in their). Galliano as well turned to exploring uniform – of course in his non-chalant, experimental manner. Other than a traditional white mackintosh coat or eclectic jewellery made out of military stripes, pins and medals, there is plenty to be proud of in heritage, Galliano seemed to be saying in this collection, but that as well  includes the right to freedom of self-expression, (inclusive of defending the LGBTQ+ rights that have been enshrined and respected by law since Europe has been united – well, mostly everywhere). However, please note that the collection wasn’t heavy with history; it wasn’t all serious and solemn. It was fun and dramatic; it was a celebration of male eroticism with a clubbing twist (have you seen Leon Dame’s finale walk?); it felt spontaneous, even though it wasn’t. 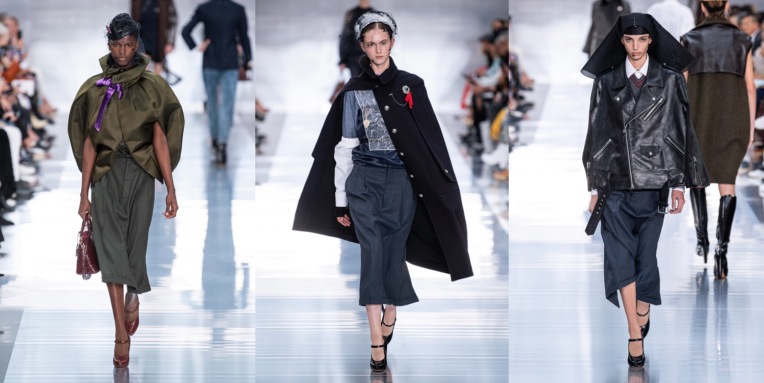 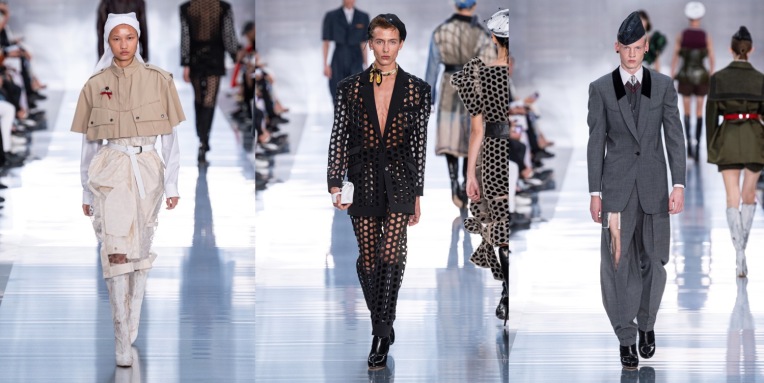