So happy to see Bouchra Jarrar back at work on her name-sake label. After her traumatic time at Lanvin, one would wonder if she ever comes back to the industry. She did this couture season, quietly, yet with confidence. “I wanted to do fashion that resembles me,” Bouchra said moments before her intimate show. Staged in her own apartment, with a slender sheaf of wheat leaning against the wall and raw quartz crystals displayed under a glass dome on a marble mantel, the presentation of Edition n°1 brought together a dozen or so of her very recognizable signatures, primarily influenced by menswear. A backless gilet was ticked out with feathers and pearls. Ample trousers were grounded by a merch-style T-shirt. Feather Maasai-inspired bracelets reprised her sports stripes. Other standout pieces included a very pretty fringed bias-cut tweed top; a sublime khaki overcoat with silver buttons; a flawless perfecto with ribbed shoulders. The presentation was a lesson in Parisian style: take a white shirt, impeccably cut black trousers, and eclectic accessories (like a fringed Berber-weave scarf) and suddenly you’ve gone from standard to elevated chic. Jarrar called those Berber weaves “ethnic with a perfume of couture.” A Paris-based couture artisan with whom Jarrar has collaborated everywhere she has worked makes each one after Jarrar picks the yarn and the dyes. She chose a russet hue, for example, in tribute to her Moroccan roots. “These are my colors. They remind me of how my grandparents wore their shawls. They carry all the warmth of my origins,” she said. The loyal, couture-buying client base of Jarrar will be more than pleased. 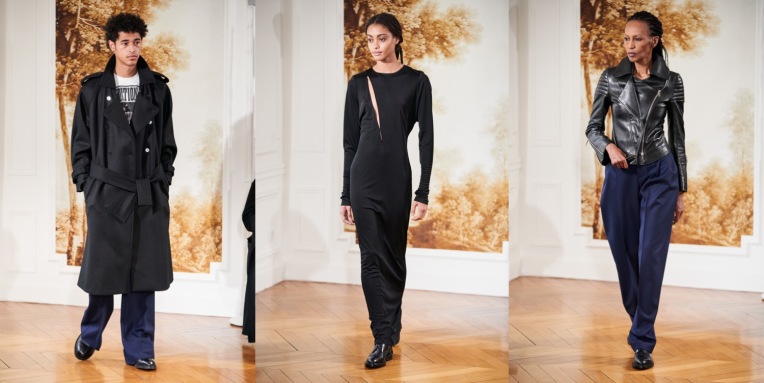