In Erdem‘s world, nothing has changed – at least, at a first glance. Here, women are still dressing up and wear magnificent dresses that have a romantic, elegant side. But the period of confinement did have an impact on Erdem Moralioglu. It reads like a mad experiment: Erdem Moralioglu in his London house for four months, with denied access to the museums and libraries that oxygenate his storyteller mind, and throw in a Susan Sontag novel. “It begins with three people dancing on the lip of a volcano,” the designer said of the collection he authored and drew in quarantine. Inspired by The Volcano Lover, Sontag’s portrait of the 18th-century beauty Emma Hamilton, who married a volcanologist obsessed with Grecian vases and had a passionate love affair with Lord Nelson, this was how Moralioglu coped with everything that happened this spring. “There was something about this odd time that we’re living in, and the idea that there is something so much bigger than all of us that controls everything,” Moralioglu said, drawing a parallel between crises past and present. “It’s beauty in a time that’s very ugly, and the idea of creating something decadent with an underbelly of something poor.” He expressed that sentiment in a meeting between formal and informal: a trans-historical voyage that referenced Grecian nymph shift dresses through the lens of the puff-sleeved empire silhouette, a sprinkling of Nelsonian regalia, and a cameo by Susan Sontag’s post-modern cardigan. Many of his embroidered muslin and organza dresses and 18th-century floral jacquard numbers were treated with crinkling effects to evoke a sense of “poor,” which means something quite different in Moralioglu’s dainty world than it does to the rest of us. But within the folds of those fabrics, there was a feeling of resourcefulness, which illustrated the idea of beauty in a time of uncertainty. Some pieces looked as if they’d been spliced with other pieces, Nelson’s admiral jackets and grosgrain regalia had a scent of thriftiness about them, and opera coats seemed to morph into khaki utility-wear. Then, a sturdy denim bottom popped up, posing as a chic pencil skirt. But still, Erdem is all about eveningwear. “I get asked the same question: Are women’s tastes and wants changing now, given the situation? On the contrary, we have a customer who’s still buying special pieces. It’s the want for something you can wear in five and 10 years. As I enter my 15th year doing this, the most thrilling thing is seeing someone wearing your work from 10 years ago. I’ve always been obsessed with permanence,” Moralioglu asserted. “When it feels like the end of the world, doesn’t someone need a pink moiré hand-embroidered gown?” 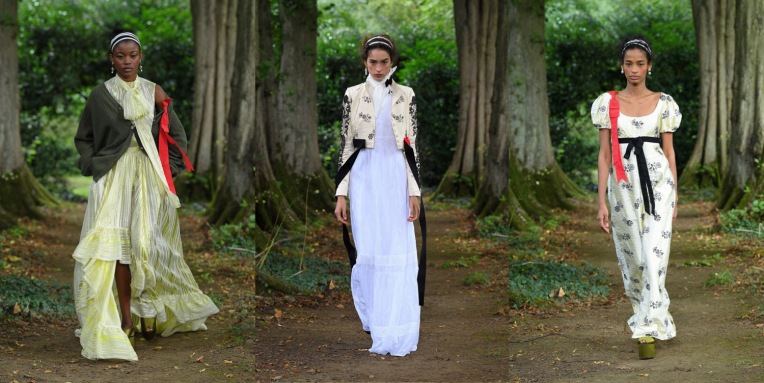